Sumac roast chicken draws on a single Middle Eastern spice to elevate an everyday roast hen with potatoes, onions, carrots, and garlic to something special. Something very special.

When we think of comfort foods, roast chicken with vegetables is near the top of our list. This recipe takes the classic crisp skin, juicy chicken, and tender veggies and levels up with the notable additions of the slightly sour smack of sumac, a Middle Eastern staple, and a creamy labneh sauce that lends ordinary ingredients an exotic flair.–Angie Zoobkoff 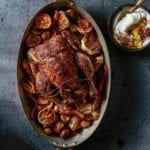 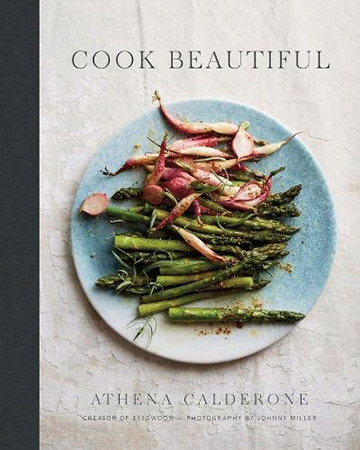 I was stunned at how juicy and delicious this chicken was; I suspect that the butter under the skin was the biggest contributor but the lemon juice and salt definitely added to it.

I used a much larger roasting pan than I normally would, measuring 10 by 16 inches, so there was more than enough room to mix the vegetables during roasting and also to cut down the cooking time to just over an hour. What I like about this recipe is that you don’t need the exact amount of ingredients for a dinner like this. The 3 lemons makes it VERY lemony and 3 heads of garlic might leave you with a lot of leftover roasted cloves. I think 2 of each would be enough for some people but we really liked the citrus flavor and, in my house, there’s no such thing as too much roasted garlic.

The flavors in the dish are sweet and bright and the addition of the labneh is amazing. I actually used za’atar seasoning (which really only has the addition of thyme compared to the original recipe). I mixed it into the labneh (at the same time I started marinating the chicken) and then sprinkled it with more sesame seeds and a swirl of oil before serving. I left both the chicken and labneh in the fridge for 7 hours before cooking.

This dish served 3 well with very little leftovers. We squeezed the garlic out of the skin and ate it with the vegetables as well as spreading it on some warm flatbreads. This morning, I used the rest of spiced labneh spread on a bagel and it was amazing. I will be making this recipe again, including just the labneh for a quick spread.

It was simple to prepare, although in the future I might mix the softened butter with the salt, pepper, and sumac and rub the mix both under the skin and on top. The sumac gave the chicken and veggies a lovely citrusy flavor that was enhanced by the lemon juice. The flavor was subtle enough, though, that the labneh or some other dipping sauce was appreciated.

This chicken dish is delicious! I had just bought sumac a few weeks ago and had yet to try it. What a great flavor this brought to roasted chicken. The dark burnished skin got crisp. I have to admit that I typically avoid eating the skin but thoroughly enjoyed here as did my husband. Further confession: As I was breaking down the rest of the chicken to store it, I did snag a few more pieces of the crispy, sumac dusted skin.

The labneh was really beautiful with the golden color of olive oil against its pure white, topped with flaky salt, pepper, black and white sesame seeds, and of course, more sumac. We served it on the side (and dipped) at the start as its temperature was still chilled. As it warmed up, we pulled it onto the chicken. Really a nice flavor and texture contrast.

The vegetables picked up both roasted flavor and lemon from the roasting. They were good, not great. I should have used a larger pan to provide more room for the hot oven air to circulate around them to roast and char a bit. Trying to toss them with oil and sumac in the pan was indeed a bit clumsy. Next time, I would mix in a bowl and then add to the roasting pan.

We did squeeze some of the roasted garlic onto the potatoes. Delicious.

WOW! What a wonderfully moist, flavorful bird! Everything in my roasting pan was delicious, from the chicken, to the potatoes, to the carrots, the onions, the garlic, and even the lemon halves. (It doesn’t hurt to have Meyer lemons to use.)

I used my 16-by-13-by-3-inch deep roasting pan. It was large enough to hold my chicken, and the 5+ pound chicken that it was, (the smallest air-chilled chicken I could find) plus all of my vegetables. I had no trouble tossing the vegetables with the chicken already being in the pan.

The vegetables benefited from being cooked in all that olive oil as well as chicken fat. It was hard to stop eating the vegetables before serving the meal. In fact, one recommendation is that if you are like us, up the amount of vegetables you throw in your roasting pan. I will definitely use more onions and more potatoes the next time that I make this dish. Oh heck, I’ll throw in extra carrots, also. And I will be making it again.

The combination of succulent roast chicken, the tart exotic sumac rub and the garlicky-chicken-fat coated vegetables alone is lovely and comfort food at its finest. Now, add a side of cooling, tart, thick, spiced yogurt and this recipe moves into the “inspired” category. It reminded me a lot of all the Lebanese flavors that I love. So, yes, we really enjoyed it and it is pretty straightforward to make once you cut up all the veggies.

I loved that the author takes the time to salt the chicken ahead of time and allows it to dry in the fridge to ensure maximum flavor and crisp skin.

It’s too easy to get stuck in a cycle of 2 or 3 roast chicken variations, so I’m glad to have something familiar yet new to add to the list.