For this rosemary onion pizza, dough is smeared with ricotta cheese and topped with caramelized onions, garlic, Parmesan cheese, and rosemary and baked until bubbly and golden brown. An inspired riff on white pizza. Ideal as a starter or simply as dinner. 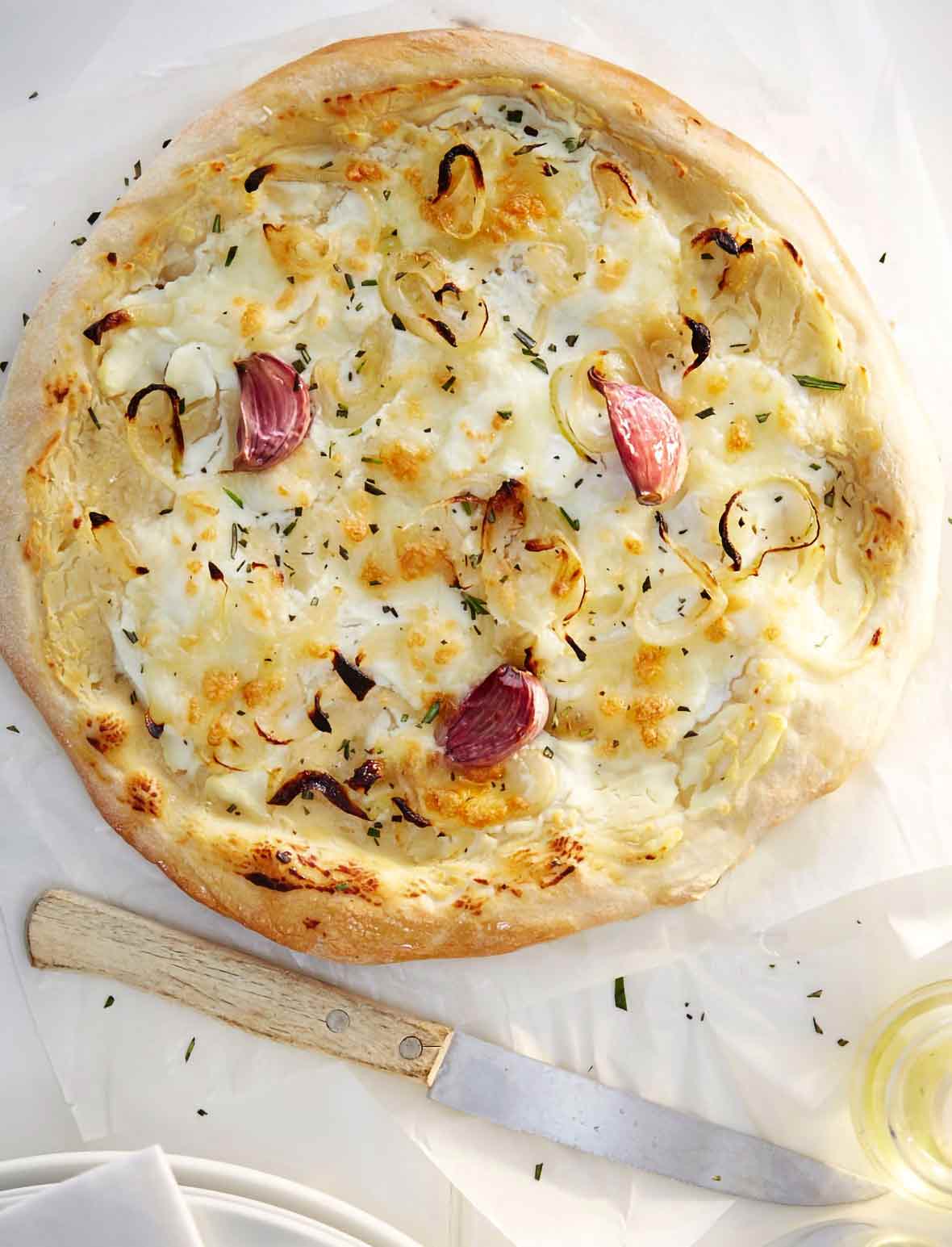 Make the pizza dough
Pour 1/4 cup of the water into the bowl of a heavy-duty mixer and stir in the honey. Sprinkle the yeast on top and let the mixture stand until the yeast softens, about 5 minutes.
Stir the mixture to make sure the yeast is dissolved. Mix in the remaining 3/4 cup water and the oil. Using a dough hook, start mixing the dough on low.
Add the salt, rosemary, and 1 cup flour and mix until it’s completely incorporated.
Then add the next cup of flour and repeat, continuing cup by cup. As the flour is incorporated, a dough ball will start to form and come away from the bowl. As you gradually add the last of the flour, turn up the speed and mix for 1 minute.
Turn the dough out onto a floured work surface. Knead until smooth.
Place dough in an oiled bowl and cover it with a cloth; allow it to rise and double in bulk, 45 to 60 minutes.
Make the topping
Meanwhile, heat a large skillet over medium heat, add 1 tablespoon of the oil, and toss in the onions. Cook until golden brown, about 7 to 10 minutes. Season with salt and pepper, and allow to cool.
Assemble and bake the pizza
Preheat the oven to 400°F (200°C). Sprinkle a little coarse cornmeal on a baking sheet.
Punch down the dough and place the dough on the cornmeal. Using your fingertips, gently make indentations in the dough and spread it to the pan size, approximately 10 by 15 inches.
Spread the ricotta on the dough to within a half inch of the edge.
Distribute the cooked onions evenly over the dough and then top with the chopped rosemary, garlic cloves if using, and Parmesan and drizzle with the remaining olive oil. If desired, sprinkle with additional freshly ground pepper.
Bake the pizza for 25 to 30 minutes, until the crust is golden and crisp.
Serve the pizza immediately or let it cool on a wire rack and then serve at room temperature, sliced into narrow wedges or strips as a starter or wider slices as something more substantial. Originally published Jul 18, 2005.
Print Recipe

This pizza is a gorgeous mingling of flavors. The sweet, charred onions along with the woodsy hint of rosemary are an elegant balance to the creamy ricotta and salty Parmesan cheeses. If you add the garlic, you'll be rewarded with even more depth of pungent, sweet flavor. The toppings make the pizza.

The pizza crust texture was tender with a tight crumb and subtle crunch when baked. The rosemary and honey added a sweet herbaceousness to the quick dough but the dough didn't have time to develop any character. Perhaps aging it overnight, or even a few days in the refrigerator, before baking would develop the signature yeasty tang I'm wanting in a pizza crust.

The amount of ricotta was spot on.

This rosemary red onion pizza was a refreshingly different type of pizza, plus it looked and smelled delicious at nearly every stage of the process. The rosemary dough was a perfect base for the sweetness of the cooked red onion. I used the optional ricotta and really loved the creaminess that it added. I also do not consider the unpeeled garlic cloves optional. I only regret that I didn't add more. After cooking the pizza, just squeeze the roasted garlic out of its peel and onto the pizza and you will not be disappointed.

-My pizza was 10 inches x 15 inches. I liked it a lot, but would probably make a slightly bigger pizza next time for thinner crust.
-The ricotta seemed like the right amount to me.
-I would change the bake time to 25-30 minutes. My pizza was just right around 27 minutes.
-4-6 servings
-My pizza did not look quite like the photo - it was much more onion covered than the photo.
-Suggestions: I would put a note about what to do with the cooked unpeeled garlic at the end of this recipe.

Let me first say that we LOVED this pizza. It's so elegant in its simplicity and comes together quickly for the perfect date-night dinner when you don't feel like making too much fuss but still want to feel *a little fancy*.

The one thing I will say is that you don't need 3 whole onions. At least I didn't. I feel like half an onion would have yielded something like you see in the picture and two made for a very onion-y pizza...which we were very happy with since my husband and I LOVE sauteed onions but if you aren't a fan I'd go with one.