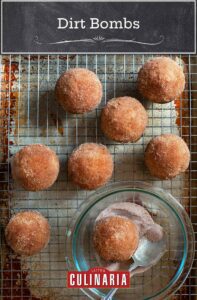 These dirt bombs, based upon those sold at Bantam Bread Company in Bantam, CT, are irresistible baked donuts spiked with nutmeg and cardamom and rolled in butter and cinnamon sugar.

Inspired by the Bantam Bread Company

I could wax poetic about Niles Golovin’s Bantam Bread Company, a local bakery in Connecticut, and their more than a dozen types of buxom breads and stunning pastries. Instead, I want to Sing the Belly Electric of what is arguably the homiest (The One would say “homeliest”) looking treat in the joint: the famous Dirt Bomb, a sweet hailed by the New York Times, Food Network, and Jane and Michael Stern, among others.

“What is a dirt bomb?” you may be asking. For the unfortunately unenlightened, a dirt bomb is a nutmeg-inflected cake donut baked in a muffin tin, dunked in melted butter while still warm, and then tossed in cinnamon sugar. And it’s the closest you can get to having an illicit affair without actually cheating on your significant other.

Can’t make it to Bantam, CT, anytime soon? Say hello to the next best thing. The Dirt Bombs recipe. I’ve taken a few liberties with the bakery’s original recipe by adding cardamom and vanilla to the batter. And while I was trying to be demure in the video found below by dunking only the tops in butter before rolling them in the cinnamon sugar, when no one’s looking, I go whole hog and dunk the entire damn thing in the butter and roll every last millimeter of it in cinnamon sugar.

Make them and you’ll thank me. And your family will thank you. And know that whatever gender you identify with, after you try them, you’ll suddenly find yourself twirling, Donna Reed-style, out of the kitchen every day with a plate of these Love Buns for all. It’s the kumbaya of breakfasts, desserts, midnight noshes, and anytime-of-day snack attacks, bringing joy to all who chow down.–David Leite

WHAT FLAVORS CAN I ADD TO DIRT BOMB DONUT?

These wonders of wonder can handle quite a bit of improvisation. Consider adding ground ginger to either the batter or the coating. The same with cloves, allspice, and anise. Just go lightly. Chocolate chunks would work in the batter for those who like to heavily gild the lily. Just please make certain to use a top-quality brand. Whatever you do to zhuzh these up, remember that unlike Bantam Bread’s dirt bombs, which can be inhaled the day after being baked and still taste great, these are best eaten the same day and preferably while warm from the oven. 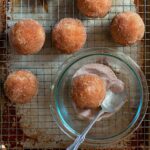 For the dirt bombs

For the cinnamon-sugar topping

These dirt bombs, with their funny name, are tender and flavorful with cardamom and nutmeg in the muffin itself. Once the ingredients are assembled, the recipe comes together quickly. My longest time prep time was opening the cardamom pods and then grinding them in the mortar. That said, the fragrance was so lovely, I enjoyed this step.

We tasted these as soon as I had dipped them in butter and then rolled them in the cinnamon sugar. They were still warm, tender, and flavorful. I worried that the cinnamon would overwhelm the nutmeg and cardamom but it didn’t at all.

I tasted them again 5 hours later and again 9 hours after I’d taken them out of the oven. The muffins were still tender and flavorful.

I liken these dirt bombs to Japanese andagi, which are delicious right out of the fryer (except, in this case, oven). I liked these because they’re baked and not fried, but somehow I feel like any healthy description I could have associated with the recipe goes right out the window when you dip them in butter! I love cinnamon-sugar toast so the topping was familiar. First dipping the Dirt Bombs in butter is pure genius. These are delicious and really pretty easy to make.

At first, I wasn’t sure why these needed to be eaten right away, or at least the same day, but they do get very dense after they cool down.

These dirt bombs are a delicious treat. Texturally, they’re a cross between a cake donut and a muffin with a tender crumb and just enough spice. They’re not too sweet and perfect with a cup of coffee in the afternoon or they’d be a great addition to a breakfast table.

Visually they’re fun, too. Think of what your muffin might look like if you dropped it in the sand at the beach—but much tastier!

They’re quite tender and might be difficult to remove from the tins if they’re too hot, but if you let them cool completely in the pans, you might face the dreaded “soggy bottom” from the steam trapped in the pan. I cooled them 5 minutes and that was just right.

These dirt bombs are great as they are, but will also make a nice launching pad for experimentation, too. The next time around I might swap some of the milk for buttermilk or sour cream for a little tang and/or add a spoonful of vanilla to compliment the spices. I think the batter is heavy enough that it could even support some blueberries and lemon rind for a change of pace.