Here’s how to make cold brew coffee. All you need is the right ratio of coffee grounds to water and a little patience. This homemade version works in a French press or a Mason jar. (For the uninitiated, cold brew coffee is achieved without any heat. The coffee grounds are instead saturated with cold water and set aside at room temperature to steep. What results is an insanely smooth, ridiculously addictive brew that’s not at all bitter.

How To Make Cold Brew Coffee 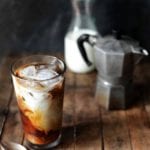 Here’s how to make cold brew coffee. All you need is the right ratio of coffee grounds to water and a little patience. This homemade version works in a French press or a Mason jar. (For the uninitiated, cold brew coffee is achieved without any heat. The coffee grounds are instead saturated with cold water and set aside at room temperature to steep. What results is an insanely smooth, ridiculously addictive brew that’s not at all bitter.
Prep 10 mins
23 hrs 50 mins
Total 1 d
Breakfast
American
1 servings
2 kcal
5 from 1 vote
Print Recipe 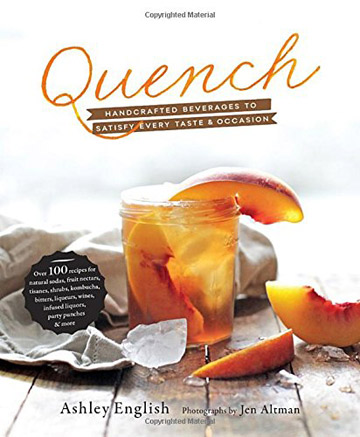 This was the most delicious cold brew coffee I’ve ever made and possibly the best cold brew I’ve ever had anywhere. The flavor was very clean and strong and really brought out the flavor of the coffee beans (which weren’t super pricey but still pretty nice).

I let mine steep for a full 24 hours and liked the result. I used Allegro brand Costa Rica Dota. I tend to think I like strong coffee, but I diluted this 1:1 with water and sometimes I added a bit more water. I finished this in 3 days, enjoying a large glass of concentrate + water + ice each morning.

The only downside to this recipe is that it seems to use SO much coffee. But then again, it’s a concentrate, so the amount is understandable.

I will definitely double or even triple this in the future!

I haven’t been to a single coffee shop where the cold brew coffee costs less that 4 dollars but I must admit it’s delicious and addictive. I do enjoy making cold brew coffee at home. This time I used Dunkin Donuts pre-ground coffee. I allowed it to steep for 16 hours and the coffee was smooth and delicious.

I am on day four and the taste is still great without any bitterness. (I will admit that when I grind my own coffee and keep it quite coarse, the flavor is even better.) Also, I always keep coffee ice cubes on hand which I make from my leftover morning coffee before it is allowed to sit and get bitter. As the deeply flavored ice melts, there’s no issue of watered-down coffee.

I like to dilute my cold brew with an equal amount of water and a bit of milk along with some sugar. I would estimate 6 servings iced coffee.

Iced coffee in the summer is the best. Especially with a good amount of milk and some sugar and maybe some homemade flavored syrup if that’s your style. This cold brew method is super easy and you don’t need any fancy equipment. Not only will this save some money, your friends will be impressed as well!

I used Kirkland Signature Columbian Supremo whole beans from Costco. I coarsely ground it myself in a regular coffee grinder. (I used about 6 short bursts.) I let it brew for 23 hours and I would soak it less when I make it again. It probably depends somewhat on the coffee used but that long of a soak was a bit too bitter for me.

I diluted the cold brew coffee concentrate about 50/50 with milk.

Assuming you plan ahead for your iced coffee, this cold brew coffee recipe is an easy, tasty option. I used a Columbian blend and made this in my giant measuring cup. It made 2 glasses or so using 1 cup concentrate with an equal portion of half-and-half. Yum yum.

I’ve enjoyed cold brew coffee at coffee bars but this was my first attempt at making cold brew coffee at home. Expect about an equal volume of concentrate as the volume of coffee grounds used (example 2 2/3 cups of grounds with 4 cups of water yields 2 1/2 to 3 cups cold brew concentrate). I used Peet’s Coffee Garuda blend ground on #8 course grind (a notch or two coarser than French press). I soaked my grounds in a large glass measuring cup for a total of 21 hours. When it came time to filter out the grounds, I used a pour-over cone lined with an unbleached #4 filter.

Flavorwise, I loved the taste. It yielded a nice mellow yet deep-flavored smooth/clean tasting cup of coffee. I used about 1/3 cup concentrate with 6 to 8 ounces of milk and it made a delicious iced coffee. One of my family members drank the coffee black without diluting and enjoyed it just as is.

My only concern about the technique is that it uses quite a bit of coffee grounds for a small amount of concentrate so if you’re using an expensive coffee it may be more pricey compared to a traditional hot brewed cup of coffee.

This method produced a really delicious coffee concentrate with no bitterness or acidity. I ended up with 3 full cups of concentrate. Could’ve been the coffee I used (Counter Culture Forty-Six) but the concentrate is strong, VERY strong, so I’ll most likely water it down a bit. I used about 1/3 cup of the straight brew in a 12-ounce glass topped off with half-and-half.

I ground the coffee in a basic Krups grinder so I had to eyeball the coarseness.

I’d heard of cold brewed coffee before but had no idea this would be something we would LOVE!

I used 2 cups Kicking Horse Grizzly ground coffee and, because we ran out, 2/3 cup espresso ground coffee. I allowed it to steep for 24 hours and we had a total of 2 2/3 cups of concentrate after much straining. (I was more than a little cautious and took about 10 minutes getting all the grounds out as I really don’t like texture in my coffee.)

We tried this 2 ways.

After a little Googling to find out how to use it I found that you can use the concentrate like a regular coffee with 1/3 cup concentrate and 2/3 cups just-boiled hot water. That was still a little bold for my taste but 1 cup hot water made a nicely robust cup of coffee. I enjoyed mine black and unadulterated.

I filled a tall glass with ice and mixed 1/3 cup concentrate, 1 tablespoon maple syrup, 1 tsp vanilla extract, and 1 cup whole milk and a dash of heavy cream in a bowl that we poured over the ice. Best iced coffee I’ve had by a long shot.

We’ve had the concentrate for most of the week using it sparingly as a special treat and the flavor seems to hold up well. I can already tell that this could become a Friday night ritual for weekends in the future.

This cold brew method for making coffee was certainly effortless. It did take some planning to remember to start the brewing process 24 hours in advance, but that was the hardest part about the recipe. The coffee was smooth and lacked the harsh bitterness that regular coffee can sometimes have. This makes a strong brew, so dilute it with twice as much water or milk as concentrate to start. Some may want to use even more milk or water to dilute.

I made a half recipe of the coffee, as we’re only weekend coffee drinkers. For a half recipe 1 1/3 cups coffee weighed 100g. I used about half light roast beans and half dark (we were working on cleaning out the ends of bags of beans). We used the coarsest grind on our burr coffee grinder (Mr. Coffee brand). I steeped it in a quart jar, which was too big for a half recipe. I steeped the coffee for the full 24 hours.

I ended up with 1 cup of concentrate. In hindsight, after I had already put them in the compost, I should have pressed on the grounds more to get more of the liquid out.

When I made the coffee, I started with 1/2 cup of concentrate and added 1/2 cup of whole milk and 1/4 cup of ice. It was too strong so I kept adding milk until it was a good strength for me. Final ratio: 2 parts milk to one part coffee concentrate plus ice.

I tried a very small amount as hot coffee, using a 2 to 1 ratio of hot water to concentrate. A small splash of milk and a dash of sugar and it was perfect. I made the hot version again when the concentrate had been in the fridge for a week. The taste was no different than on the first day. I made a full mug this time and I had to microwave the diluted mix for about 20 seconds to get it hot. There was no bitterness after the microwave.

This was very good. I used Turkish coffee, the brand was Kurukahveci Mehmet Efendi. I used 1 cup of milk to 1 ounce of coffee concentrate. I got 15 servings.

This recipe was so easy to throw together in my liter-sized French press and pop on the counter for 24 hours to sit. I love having this concentrate in the fridge for a mid-afternoon pick-me-up! It’s simple, flavorful, and so refreshing.

I sweetened mine with a splash of 1:1 simple syrup and used some 2% milk to make it creamy without being too heavy. Instead of throwing the grounds out after the concentrate was ready, I refilled the French press with new water and repeated the process. The second brew from the grounds was a little more mellow and made great coffee ice cubes to toss in my iced coffees to keep it from getting watered down!

I can be pretty frugal so when I see an opportunity to do it myself and save a little cash, I always give it a try! This is easy as can be so if you have a little time, it’s totally worth it.

I started with some store-bought, already ground decaf French vanilla coffee. I used the simplest of methods to brew: just a bowl large enough to hold the coffee and 4 cups of water. I covered it in plastic wrap and let it sit for 14 hours.

Next, I poured the coffee mixture through a fine mesh sieve lined with a paper towel over another bowl. (I had planned on using a coffee filter but since I was out, I used the paper towel, which was a fine substitute but a little messier.)

I ended up with 2 cups of concentrate which I chilled until I was ready to use. I ended up mixing it 1:1 ratio, served over ice with enough half-and-half to suit my taste, which was 2 tablespoons for a medium-size to-go iced coffee cup.

This cold-brewed coffee is like black gold in your refrigerator! This concentrate is super easy to make and lends itself to many drink variations.

I used a nut milk bag to hold the coffee grinds, making it easy to remove from the concentrate and squeeze the extra liquid out of the grinds. The coffee is very strong so you can dilute it to your preferred strength with ice, water, cream, milk, or whatever liquid you choose. A definite must-have for your cold coffee drinks!

I used Peet’s French roast coffee and drip coffee maker grind. I have made cold coffee before and I usually make it in the refrigerator. Didn’t notice any difference between room temperature and refrigerator steeping.

I diluted it using approximately 1/2 cup concentrate with 1/2 cup water and a lot of ice.