Skip to content
home | recipes | Spinach, Tomato, and Mushroom Burger
Jump to the recipe
Shares159PinShareTweetYummlyShare on FlipboardEmailHeart this post

This spinach, tomato, and mushroom burger is loaded with garlicky greens, marinated tomatoes, and a grilled portobello mushroom stuffed between toasted buns. A veggie burger to satisfy everyone. 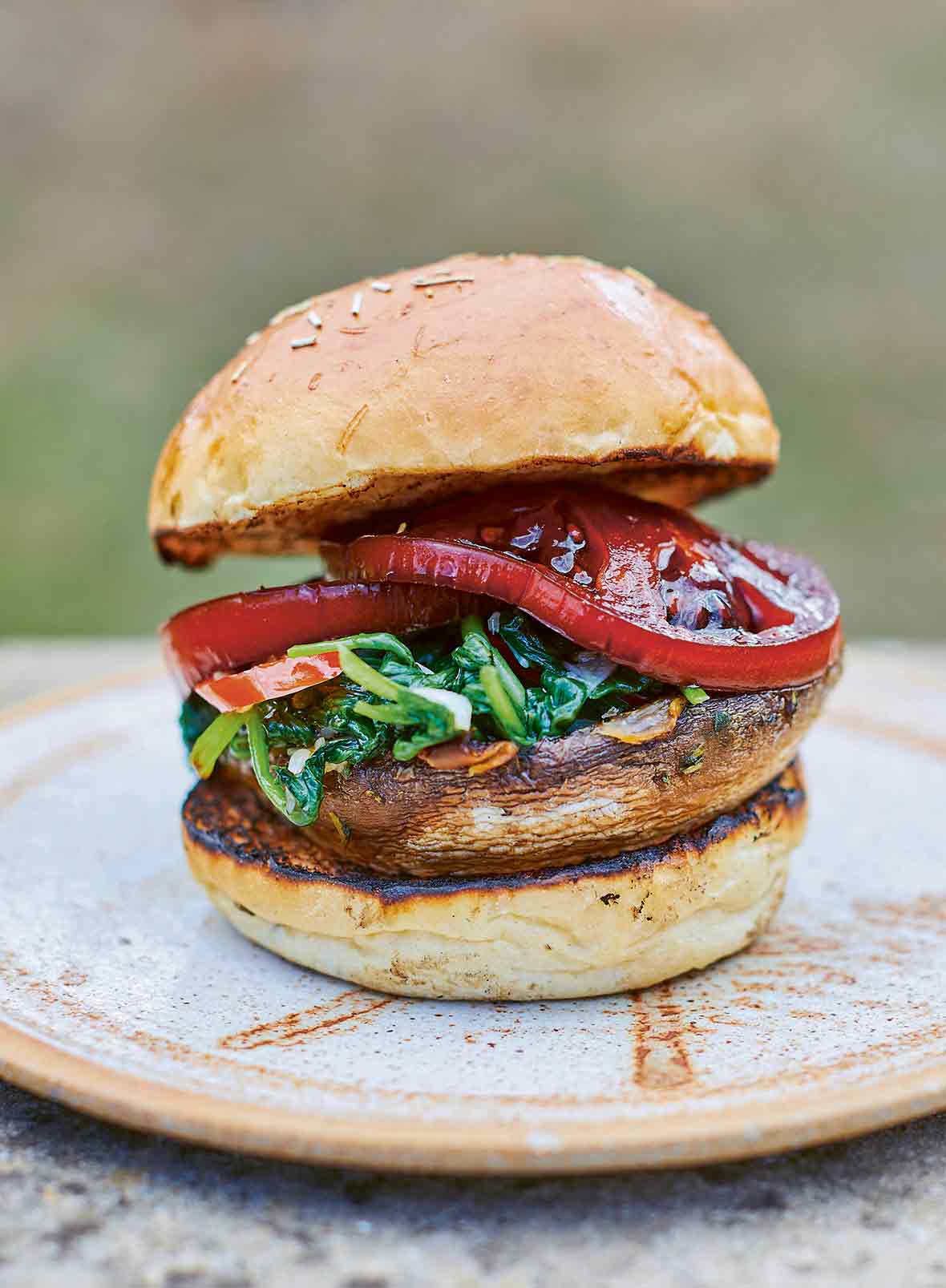 No ordinary vegan burger, this spinach, tomato, and mushroom burger is piled high with garlicky spinach and tomatoes doused with a unique soy, chile, and ginger marinade. Pleasing to vegetarians and carnivores alike.–Angie Zoobkoff 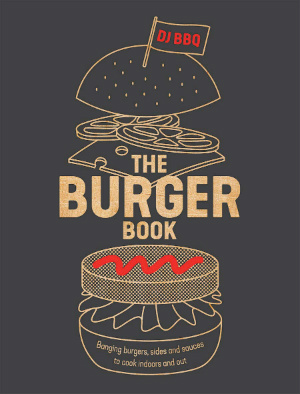 Make the marinated tomatoes
In a shallow bowl, combine the rice vinegar, soy sauce, sugar, scallion, red chile, and ginger, and stir together to dissolve the sugar.
Add the tomatoes, turn to coat, and marinate for at least 30 minutes, or as long as overnight, turning occasionally. Transfer to a plate and pat the tomatoes dry.
Make the mushroom burgers
In a small bowl, mix the herbs with the butter or oil.
Remove the stems and gills from the mushrooms. Place the mushrooms, rounded caps down, on the work surface. Spread the butter over the gill side of the mushrooms.
If you’re roasting the mushrooms, preheat the oven to 350°F (180ºC). Line a rimmed baking sheet with foil. Place the mushrooms, butter side up, on the foil and roast until the mushrooms are tender and begin to release their liquid, 10 to 15 minutes. If you’re grilling the mushrooms, preheat the grill to medium-high. Cook the mushrooms, butter side up, on a plancha or directly on the grill over direct heat until tender, 5 to 10 minutes.
Meanwhile, in a large skillet over low heat, warm a little butter or oil. Toss in the garlic and chile and cook, stirring occasionally, until the garlic turns golden, 1 to 2 minutes.
Add the spinach to the skillet, carefully dribble in the water, and place a lid or baking sheet on the skillet. Cook the spinach, stirring a couple times, until it wilts, 1 to 3 minutes.
Season the spinach with salt and pepper. Immediately transfer to a plate, spread it evenly, and let it cool slightly. Pat the spinach completely dry using a kitchen towel or paper towels.
To assemble the burgers, place a mushroom on each of the bottom buns. Top with the wilted spinach, a couple slices patted-dry tomatoes, and the top of the bun. Devour.
Print Recipe

"Wow. Really delicious." That was his response after my partner inhaled his burger. And he was right. I don't know what it is exactly that makes this so delicious, but I think it’s the combination of the marinated tomatoes, the garlicky spinach, and the roasted mushrooms. This vegan burger recipe is definitely a keeper!

These mushroom burgers pack a lot of flavor. They are really, really delicious.

I've long been a fan of ramping up tomato flavors by using soy, vinegar, and sugar, and here it’s done to good effect. I let my tomato slices marinate for 4 hours. In the future, especially if I have a big beefsteak tomato where 1 slice covers the whole burger, I might even put the tomato slices on the grill for a few seconds per side. I didn't do that with this recipe, but I've done it in the past and it can be lovely.

The mushrooms tasted great. This might sound crazy, but I recently put a portobello cap in my waffle iron and it came out amazingly good. So I think it could be fun to brush the caps with herb butter and then "waffle" them.

I used supermarket tomatoes for these. One of the supposedly more flavorful (and organic) varieties from Florida. It was okay because of the marinade. I used a fresno chile. I used Miyoko's vegan butter. I used regular, mature spinach from my CSA. I cannot imagine that baby spinach would be as good here, let alone preferable.

I love portobello mushroom burgers, heirloom tomatoes, and herbs, all fresh from the garden. This mushroom burger hits all the high notes with layers of flavor that create a delicious, easy-to-assemble addition to the BBQ repertoire. You can easily have these on the table within an hour.

I marinated 2 sets of tomato slices—one batch for 30 minutes and another overnight. I decided 1 hour was enough to flavor the tomatoes.

I would have happily had 2 burgers except that I didn't want 2 burger buns so I would compromise by serving crisp lettuce leaves as an optional alternative for buns.

Turns out we should have been marinating our burger tomatoes all along. These are so savory and summery! They also came together quickly. And while I did tweak my grilling process (I did stovetop and flipped the mushrooms to spread some butter onto the grill pan), the recipe is easy to follow, especially considering the lovely and tasty result.

I used local heirloom tomatoes, brown rice vinegar, ancho chile, and baby spinach. My tomatoes marinated for 45 minutes. My one addition would be to add a crisp leaf or two of romaine, just to give these a touch of crunch. Actually we got 2 servings as we both ate 2 burgers (heh) but you know, it depends on the crowd. We also didn't have sides.

I grilled the burgers inside, on a cast-iron grill pan over a burner. This was the trickiest part of the recipe. The portobellos sat on the grill for approximately 10 minutes. And I will say, I just wasn’t sure about the whole “grill it butter-side-up” thing. The butter in my portobellos was solid by the time I put them on the grill (I melted my butter, stirred in the herbs, then poured it into the mushroom caps, where it cooled to a soft paste), and since my portobellos weren’t grilled in an oven or directly over hot coals, the butter didn't really melt until I actually flipped them for a moment to transfer some butter onto the grill pan. I then flipped them back so they were still butter-side up for the majority. The buttery portobellos started to sizzle a bit after a minute, and once the bottom of each was lightly browned, I considered them done. I wonder if the recipe should say something like, brush the top of the mushroom with the butter mixture, then evenly distribute the rest of the butter between mushrooms... but then maybe you would need a slight bit more butter? And also the butter inside the mushrooms might still not melt. I don't know, I thought flipping them worked out great. I would recommend it.