This French toast is the real French deal. (Pain perdu translates to “lost bread,” referring to how this approach beautifully transforms day-old bread into something you’ll want time and again). It leisurely soaks stale bread in a sweet vanilla custard (no cinnamon allowed!) and then cooks it in butter until crisp on the outside and creamy inside. Luxuriously rich and blissfully simple.–Angie Zoobkoff

Can I make French toast ahead of time?

Our testers agreed that this French toast is best eaten right out of the pan, rather than making it and piling it up in a warm oven. If you’re planning to serve a number of eaters, you might want to use two skillets or a large griddle.

What kinds of bread are good for french toast?

Brioche and challah are excellent choices but be aware that the butteriness of the bread will take this breakfast right over the top. Slices of baguette would be incredible, because of its structure (it won’t fall apart) and it’s not too sweet. Actually, anything with a bit of a dense crumb and a slid crust will work well here. 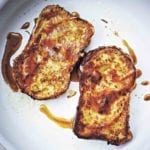 This French toast is the real French deal. (Pain perdu translates to “lost bread,” referring to how this approach beautifully transforms day-old bread into something you’ll want time and again). It leisurely soaks stale bread in a sweet vanilla custard (no cinnamon allowed!) and then cooks it in butter until crisp on the outside and creamy inside.
Prep 20 mins
Cook 10 mins
Total 30 mins
Breakfast
French
4 servings
387 kcal
4.84 / 6 votes
Print Recipe 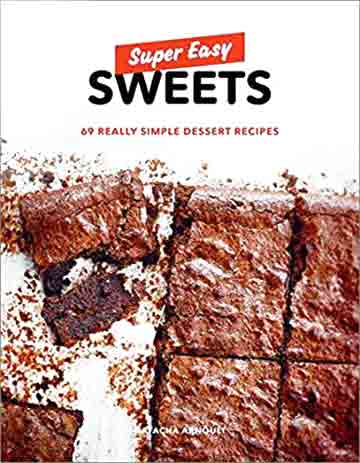 Super rich and decadent is my best description for this wonderful French toast! I was anxious to see the difference between the true French version and our Americanized French toast, and we’re talking night and day. This version is soaked in a sweet custard, not unlike my usual custard, but is cooked in a lot of butter which amps up the richness even more. You won’t find cinnamon anywhere in this recipe, but trust me, you won’t miss it! The exterior had a nice crisp golden crust and the interior was pillowy soft with a very rich custardy flavor. Next, add the maple syrup and devour. Then time for a nap!

I used regular whole milk and a loaf of brioche bread, which I cut into 1-inch-thick slices. As this bread is buttery and delicate on its own, I’m sure it added to the overall pastry-like richness of this dish. I also couldn’t soak the bread slices for more than 10 seconds or it threatened to fall apart before I could get it to the skillet. I did need to lower the heat on the second batch to keep what was left of the butter from burning.

The next time, I’ll try a French baguette as it is sturdier in structure and not as buttery tasting. Also, I think the recipe should note that the butter not be added to the skillet all at once, maybe one tablespoon at a time for each batch. By the time the first batch of bread is done, the butter has been pretty much absorbed.

I should stress that I tested this recipe very carefully, following each measurement as written and noting the timings as I worked. Having said that, this is the French toast of my youth, the one my mother made and I copied, never measuring, never following a clock, just knowing what was right.

Every child should have this experience of French toast. It’s as different from the frozen microwaveable product as a cup of rich coffee brewed from freshly ground beans is different from instant decaf.

The recipe is easy to follow and virtually foolproof. The end result is the bread that is slightly crusty on the outside with a custard-like texture on the inside. Even one of my cats, both of whom usually disdain human foodstuffs, attempted to steal a piece from my plate.

I used a loaf of sesame seed bread and sliced it myself. The sesame seeds imparted a slight nuttiness to the dish. The bread I chose was fresh even though I usually use day-old for pain perdu. I used whole milk, unsalted butter, and real maple syrup.

The only difficulty I encountered was that the last 2 slices of bread were a little deprived of the egg mixture. They were still well soaked, just not quite as soaked. If I make it again, I might cut the bread in slightly smaller slices, soak a portion of a minute less, or add a smidgen more milk to the equation.

A second serving of the same dish was topped with a dollop of whipped cream and a few fresh peach slices. The varieties that can be made from the same basic recipe are endless.

Feeling a little lost this pandemic-year Christmas morning, I happened upon the perfect brunch, lost bread. I used challah and cooked it to a dark golden brown, using the photos as a guide. My challah browned in a more consistent and less-spotty manner than the bread in the photo.

I cooked for a full three minutes on both sides and didn’t ever lower the heat. I served with both maple syrup (which I believe is not optional!) and a selection of fresh fruit, including sliced bananas, blackberries, and red raspberries; the berries especially added festive color to the plate. With all of the fruit, honey might have been a nice touch for serving, but since we had real maple syrup, it would have been tough not to use it. Other fruits could be equally tasty, such as strawberries or pears, especially a pear compote.

Devour immediately is accurate. The slices are never better than just out of the pan, which to our way of thinking leaves two options: either slide the perfectly golden and crispy slice onto someone’s waiting plate or cook using two skillets simultaneously if making more than a single batch, so more than one person can eat at a time.

I’m not sure the entire amount of sugar is necessary if you’re serving with either the optional maple syrup or honey. And I might—just might—have added a bit more butter to the skillet prior to making the flip at the 3-minute mark, just a little bit more, slice by slice, and flip by flip.