This Burgundian honey spice bread or pain d’épices is, as the name implies, made with cinnamon, cloves, ginger, fennel seed, candied ginger, and honey. Perfect for gifting as well as holiday entertaining and an ideal substitute for gingerbread. 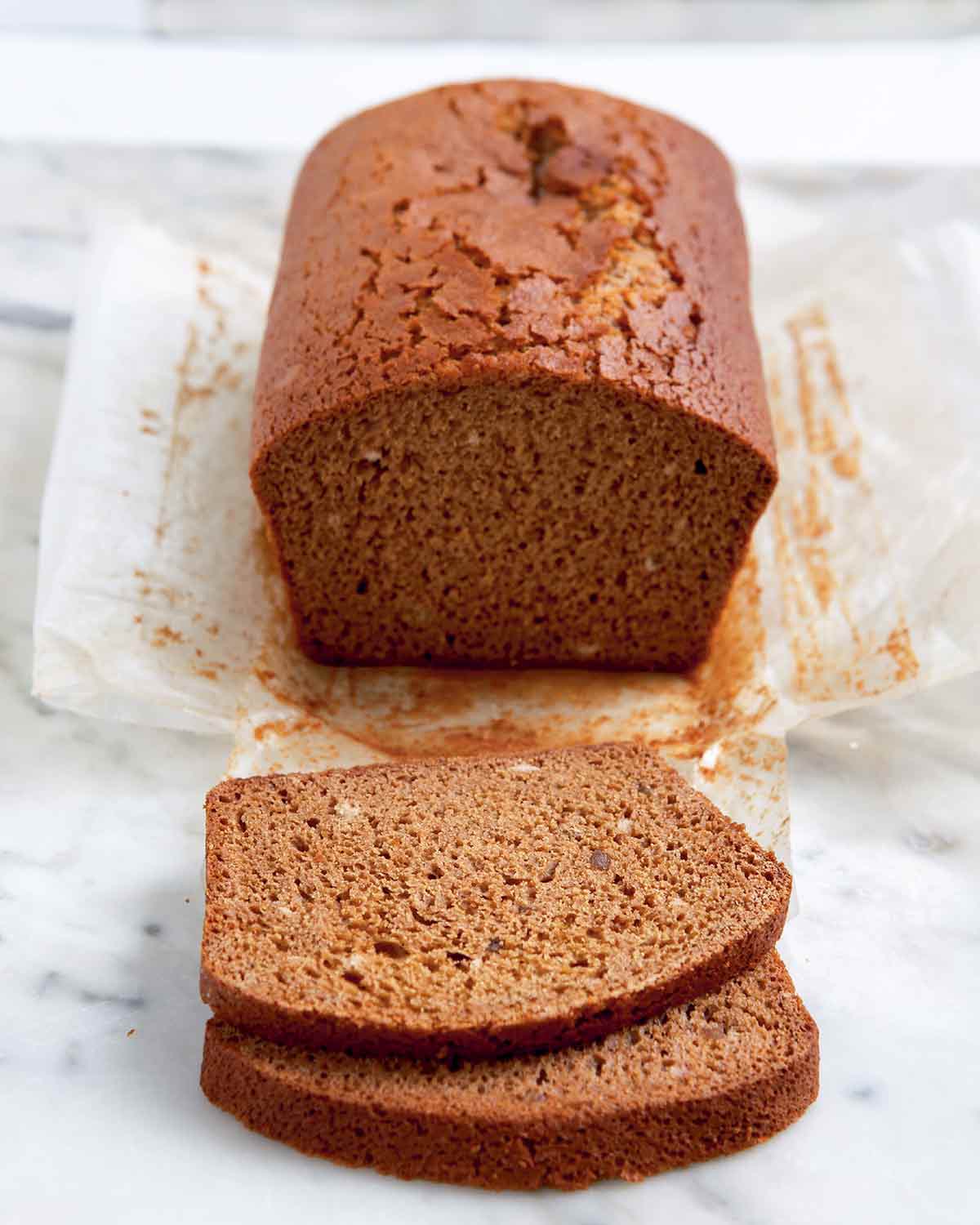 This Burgundian honey spice bread is sorta a cheater’s version of the traditional pain d’épices (pronounced “pan DAY piece”) found in France since the Middle Ages. There’s a reason things become a classic and this honeyed, nuanced bread is a perfect example of something that needs no refinement…except perhaps the subtle shortcuts that make it even less labor-intensive than the original.–Renee Schettler Rossi

Preheat the oven to 350°F (175°). Brush two 9-by-5-by-3-inch (23-by-13-by-8-cm) loaf pans with some of the butter. Cut 4 strips of parchment paper so that you have 2 strips that are 15-by-5 inches (38-by-13 cm) and 2 strips that are 14-by-8 inches (36-by-20 cm). Place the 2 long pieces of parchment along the length of the buttered pan and press to adhere. Brush the parchment with butter. Lay the two wider pieces crosswise on top. Brush the parchment with the remaining butter. Everything must be very well buttered or the bread will stick.
Heat the milk, brown sugar, and honey in a medium saucepan over medium heat. Stir until the sugar is dissolved, about 5 minutes. Remove from the heat and let cool slightly.
In the bowl of a stand mixer fitted with the paddle attachment, combine the flour, ground fennel, cinnamon, cloves, ginger, and salt. In 2 batches, add the honey mixture and candied ginger. Scrape down the sides as needed and blend on low speed until just combined.
In a small liquid measuring cup, combine the egg, egg yolk, and baking soda. Stir to combine. Add the egg mixture to the batter and beat until well blended.
To bake the loaves, pour the batter into the prepared loaf pans, dividing it evenly and not filling the pans more than halfway. Bake, rotating once, until a skewer inserted into the center comes out clean, 45 to 50 minutes. Cover with aluminum foil if the bread starts to become too dark.
Remove the loaves to a rack to cool slightly, about 15 minutes. Turn them out of the pans and immediately remove the parchment paper. Store very tightly wrapped in plastic wrap for up to 1 week. Originally published December 23, 2009.
Print Recipe

This Burgundian Honey Spice Bread is, to say the very least, a FABULOUS and festive brown bread that will make every day a holiday. The bread is very cake-like and is delicious with or without butter or even buttercream. The bread comes together very easily. For an occasion, you could easily double the recipe and have 4 wonderful loaves.

Candied or crystallized ginger can be difficult to find (and sometimes overpriced); I found mine at Trader Joe's for $1.49 for an 8-ounce bag. I like to double the candied ginger to give it a nice kick.

Make this bread, you won't be disappointed!

This Burgundian honey spice bread had a lovely, subtle taste and texture and more structure than a typical quick bread. I think you could increase the spices a bit, especially the fennel (if you like it) and both the dried and candied ginger. This bread makes a nice afternoon snack slathered with butter or mascarpone, or would be great for breakfast, too. Over time, the wonderful honey flavor becomes more pronounced.

A note about the loaf pan: I baked two loaves, one in a light-colored aluminum pan and one in a dark grey pan.The darker pan caused the outer crust to burn a bit (due to the high sugar content) and tasted a bit bitter compared with the loaf in the lighter colored pan.

It took the whole 50 minutes to bake through. I tested the loaves at 45 minutes and it was still a bit tacky in the center, but the additional 5 or so minutes made it perfect. Total time 2 hours.

This was a fun recipe. I love a good quick bread. I love all things spicy. And I had never used fennel seed in a dessert. I had all the ingredients on hand, making it really easy to throw together. And I love recipes that make two loves, so I can share with friends and still keep some for myself. We ate some warm about half an hour out of the oven, and then had some for dessert in the evening. It was lovely both times. Though it is really special warm.

I would say that it benefits from something on top. I smeared a bit of butter on top when it was warm. And for dessert we had it with whipped cream. Not that it is unpleasant by itself. It just is better with some sort of accompaniment. I will certainly make this again. And I loved giving the extra loaf to friends. The flavors punched up a bit the following days, though the texture is best warm.

If I thought there would be any problem with what to do with TWO loaves of spice bread, that worry can be set to rest, along with concern about what would it taste like at the end of the week. Our household had reduced one loaf to close to half by the end of day two, as did close food friends. I personally was part of both groups. Let's just say it will not make it 7 days except for the discipline of those who hide some in the freezer. There already has been a request for the next one.

The recipe itself just works. I had to grind two of the spices, which was no trouble at all, and especially for the fennel I think freshly ground is worth the little bit of effort. The parchment forms easy-to-lift straps if you leave the broad pieces an extra inch or two longer, and do not be alarmed if the pan looks buttery, because the loaf itself will be perfect.

I checked it at 45 minutes and gave it 5 more minutes, but it may not have been needed, as the edges were pulling slightly away from the pan, but one of my pans is slightly more upright and produced more of a springy top. Both were fine when cooled and sliced. Although the honey and brown sugar do make this a sweet bread, it is not cloying in any way, and the spices are well balanced.

It has become a daily habit with coffee or after dinner. It works served naked as a slice but also is really scrummy with some cheese. (My friends served slices with some brie and Cypress Grove Truffle Tremor goat cheese and an Aperol Spritz!) We wrapped the loaves using plastic wrap and they have been equally delicious each day. There is NO chance there will be any left for the end of the week.

This spice bread yields the same lovely honey and spice reward as my favorite holiday cookies but without the overnight resting of the dough or making of candied orange peel!

I am now officially jealous of every French school kid who came home to a slice of this on a regular basis.