This focaccia with red onion and rosemary has that iconic crunchy, perfectly salted surface and a tender texture beneath. It’s topped with caramelized onions and fragrant rosemary and makes a worthy distraction—both the making and the devouring.

This impressively light and airy Italian focaccia bread has a tender, chewy crumb, thanks to extensive kneading and an overnight rest in the refrigerator. And, natch, it boasts the requisite crunchy surface speckled with coarse salt. It takes a little—actually, a lotta—extra character from the tamed sharpness of red onion and the herbaceousness of rosemary.–Angie Zoobkoff

Why is focaccia dough so sticky and wet?

According to the author of this recipe, “Ninety per cent hydration means this dough is wild and wet. This helps to contribute to a damp, soft, open crumb that is bouncy in texture. Wetter is always better for focaccia, so it is worth taking your time when it comes to kneading this dough. You want to build up the gluten as much as possible to form a brilliantly elastic dough—the result will be all the chewier for it.” 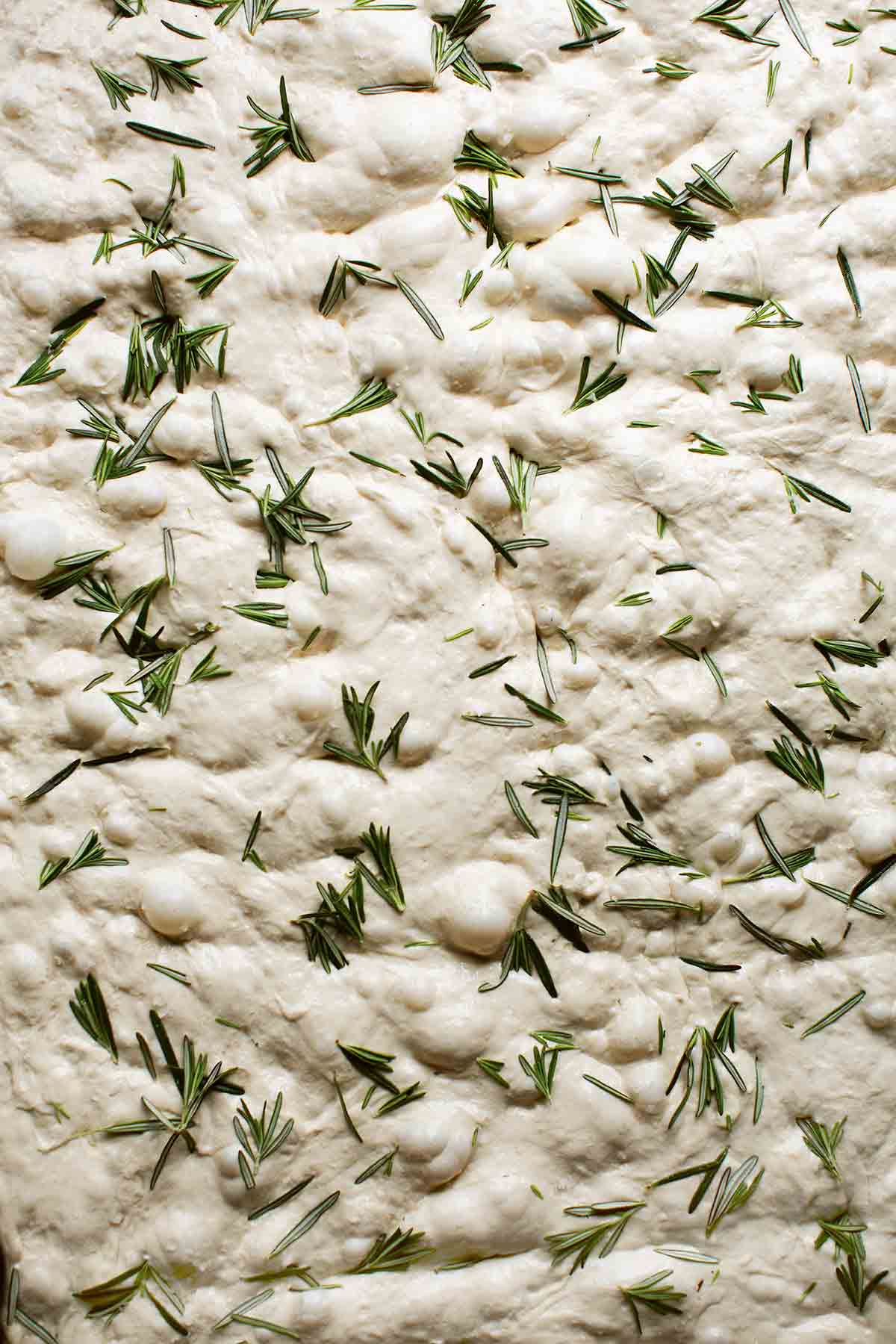 Focaccia with Red Onion and Rosemary 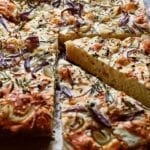 This focaccia with red onion and rosemary has that iconic crunchy, perfectly salted surface and a tender texture beneath. It’s topped with caramelized onions and fragrant rosemary and makes a worthy distraction—both the making and the devouring.
Flora Shedden
Prep 30 mins
Cook 17 hrs 30 mins
Total 18 hrs
Sides
Italian
6 to 8 servings
332 kcal
5 from 1 vote
Print Recipe 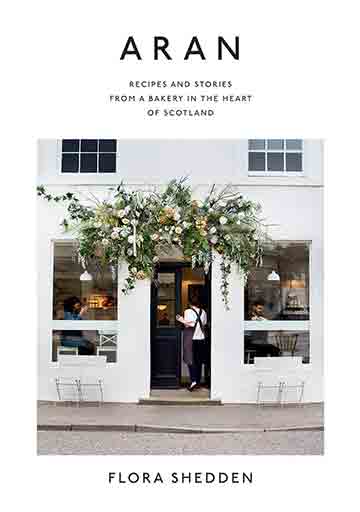 If you’re a purist, you can opt to for a simple sprinkling of salt and perhaps a scattering of rosemary (or you could swap that out for thyme). A handful of Sungold cherry tomatoes and/or olives would hold true to the Italian theme. Whereas black sesame seeds could make quite a startling statement. Why limit yourself to convention? We do that enough in our everyday lives.

This is a tale of two loaves, not the best or the worst of loaves, but the good and the better of loaves (apologies to Dickens). I was drawn to the recipe because I do bake bread at least once a week. I’ve never made focaccia, so this seemed like an ideal time to try this recipe. Spoiler alert: the end results were good and then amazing, but the road there was not easy. At the end of the day, it was worth tweaking and doing twice. Between my husband, myself and my daughter, we almost demolished the entire pan.

After the final mix, the dough must proof for an hour with stretching very 15 minutes. The recipe is not clear if the dough should remain in the mixing bowl or be left on work surface. I chose to put it on a silicone mat and attempt to stretch and fold based on the instructions. I just used my regular stretching technique.

The dough did rise but it was hard to measure. After the hour of proofing, I placed it in a plastic container. As it was very warm, I noticed it started rising quickly so I put it in a larger bowl in order to avoid disaster and placed it in the fridge as directed. The next day, the dough had risen quite a lot. The subsequent stretching instructions should be a little clearer as you are really more coaxing the dough into the corners of the pan than stretching. I used a 13-by-9-by-2-inch cake pan to bake.

I baked at 450 degrees as directed. At this temp, in my oven, took a little longer to get brown on top. The recipe calls for the bread to be brown on the bottom, but it is somewhat hard to see in the cake pan.

The end result was a good but somewhat too thick loaf of focaccia. If did not brown particularly well on the bake setting. That being said, it was very flavorful and my family made short work of the pan.

NOTE After making this, I pulled out the manual for my Kitchen Aid and read the bread making section. (circa 1982) There are a couple of really important things that need to be clarified for anyone likely to use a Kitchen Aid to make bread. The first being use the dough hook from the beginning. This seems obvious, but I had a vague recollection of changing to the dough hook mid recipe when making another yeast bread. I was wrong. According to Kitchen Aid, the dry ingredients should be placed in the bowl with the exception of 1or 2 cups of flour. The wet ingredients should be added slowly with the mixer on low speed. There is a caution that if the wet ingredients are add too quickly they will pool in the bottom of the bowl and then slow down the mixing. Additionally the dough should be mixed at a slow speed not on high, as suggested in the recipe, that is unless you want to burn your motor out. I am guessing that new model Kitchen Aids have similar instructions.

I wanted to take a second crack at this with a few modifications. The recipe mentions that this is a 90% hydration loaf and hard to knead by hand. I wanted to challenge that assumption, at least on the initial mixing of the ingredients. I make sourdough with various hydrations percentages and mix by hand on a regular basis. If the dough is sticky, just use wet hands to knead.

Here and the modifications I made to the recipe

I used a quarter sheet pan. The dough was much moister and easier to stretch. I used the convection bake setting on my oven. I cooked it at 425°F on the third rack.

The end result was far superior to the first attempt. Baking in the quarter sheet pan on the convection setting allowed for the bread to brown. It was also much moister than the first version. Still a big hit with my family and very little left after tasting.

I would definitely make this focaccia again.

This focaccia bread is perfect. Perfect crumb, perfect moisture, perfect flavor. The dough was definitely very sticky and wet and not at all conducive to handling, but it rose beautifully and the finished loaf had plenty of airy pockets. I topped it with rosemary and sea salt (not red onions) and served it warm. Everyone loved it and I managed to get my kids out of bed before 11 the next day by threatening to eat all the leftovers myself!

The dough was very wet, but mixed up well. The next day, it had risen more in the container, and I tipped it into the oiled baking pan. The recipe says to stretch it every 30 minutes, but after the initial gentle stretch to fit the pan, it didn’t shrink back or need to be stretched. I baked mine in a 9-by-13-inch pan and this worked perfectly.

Probably the most perfect focaccia I have ever made! Best served straight out of the oven. I topped it with artichoke hearts, sage, yellow peppers, and a sprinkle of Parmesan and sea salt and served it with olive oi. I must confess, I made it my main meal!

This is wonderful. A soft, chewy loaf with a golden crispy crust. Perfect on its own but with lots of nooks that happily soak up any sauce or any topping you choose. The dough came together as directed and doubled nicely overnight in the fridge. I scattered some sea salt and fresh rosemary on top, exceptional. Will definitely make this again and try different toppings. I served this with pasta the first night and then again along side a dinner salad the next.

Mixed water in for 10 minutes. Started at lowest spend and then moved speed up 2 notches.

Used sea salt and rosemary on top and then finished with olive oil once it was baked.

Airy but crunchy, this focaccia would be perfect as a pizza crust, a side dish, or a flatbread.

The dough was so wet it stuck to everything. I topped it with chopped fresh rosemary along with sea salt. Baked it for 20 minutes until golden both on top and bottom. The texture was pretty good with nice air pockets but almost seemed undercooked even though exterior was completely done.

The smell of this focaccia baking is amazing and will transform your home into a bakery or pizzeria. The taste of it is just as good and won’t disappoint. The texture is crunchy on the outside soft but chewy on the inside. All around perfect!

The recipe is very easy and fun. I mixed my dough in a mixer. I let it proof for an hour while folding it every 15 minutes. The first 15 minutes it seemed to rise a bit not a ton. After each fold, it seemed to rise about the same amount, which was about 1/4 more than original rise. When I finished all the folding, the dough was drier than when I started, but still moist. I did the windowpane test, which is pretty cool, and it worked. I stuck it in a plastic bowl and put it in the fridge.

This morning when I took it out, it had rose some more. I put it on the roasting pan and stretched it out every 30 minutes. Still being a little short on supplies these days, I only had black olives to top it with. I sprinkled it with sea salt and some herbs de provence. The black olives were great on it, adding a nice touch of saltiness. My focaccia baked for 20 minutes. After the first 15 minutes, I thought it looked too light in color so I left it in. After the next 5 minutes it still didn’t darken up but it was done at that point. I’m anxious to try again when I have more toppings like anchovies! Yes, more saltiness.

My husband and I have been nibbling on the focaccia all morning so serving size depends. Right now I would say 2! If you served it as a snack I say 4, with a meal 6. In this house probably just Would be great with a nice glass of wine!