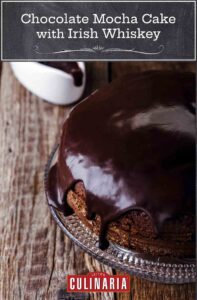 So maybe the provenance of this recipe isn’t Irish per se. But a splash of Irish whiskey makes almost anything quite Irish in spirit, don’t you agree?–Renee Schettler

What makes a cake airy?

In this recipe, in particular, beating the butter and sugar until light and fluffy will make all the difference in the resulting texture. Beating room-temperature butter with sugar incorporates quite a lot of air into the mixture—more air than you might imagine. And no air means no fluffiness. For best results, beat butter and sugar together for 1 to 2 minutes–this is especially important because there are no leaveners in the batter and the only rise you get is from what you incorporate with your beaters.

How do I fix a chocolate glaze that separates?

Don’t panic, it can be fixed! If the butter and chocolate separate, add a little cream and whisk until the mixture comes together.

What’s the difference between whisky and whiskey?

It all comes down to where you are, or where your allegiances lie. Generally speaking, it’s spelled whiskey in the United States and Ireland. It’s known as whisky in Scotland and Canada–which are also both well known for their brew. The Japanese spelling, in case you’re interested, is whisky, because the study of Scotch whisky (also called Scotch..) inspired the Japanese whisky movement. 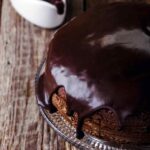 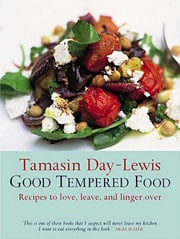 I didn’t have high hopes for this chocolate mocha cake until I tasted it. It was so good. The texture was dense but light with a slight crunch due to the ground almonds. The flavor of the chocolate, coffee, and whiskey was wonderful, both in the cake and glaze. It wasn’t overly sweet but had a nice depth of flavor. The chocolate was the forefront flavor, followed by mocha, with a nice finish of whiskey.

I found that as I began to prepare this cake, some of the processes took a bit of faith. My first challenge was incorporating raw sugar with butter. Raw sugar does not blend as well as refined sugar. I did the best I could (it was still a bit grainy) and moved on to the next instruction without incident. Then I began to fold the egg whites in by spoonfuls, alternating with the flour. This took about 10 minutes or so and seemed a bit redundant. I might do more egg whites to flour next time.

Then I set to work to make the glaze. Following the instructions exactly, I didn’t have any separation issues with the glaze. However, once I began beating the glaze over the bowl of ice water, my glaze became a buttercream icing. (I beat the frosting for about 1 1/2 minutes over the ice.) There would be no pouring of frosting or dripping down the sides of the cake. This glaze was for spreading only. While I wouldn’t serve this for a birthday, as it’s too small, this would be great for an upcoming Irish holiday.

This chocolate mocha cake recipe makes a really nice “adult” cake, one that’s not too sweet. The whiskey isn’t obvious, but rather lends a subtle background note. It won’t be for everyone, but I much prefer this to the overly rich, overly sweet cakes so common today. It’s also an old-school cake with no chemical leaveners. To me, that’s a good thing. I believe it has a purity of flavor that can’t be matched by a cake with chemical leaveners in it. That’s why I bother to make recipes like this one.

It does, however, mean you will need to pay attention to the technique. The only air going into this recipe is what you beat into it. Thus, beating the butter and whipping the egg whites are important here. If you have a stand mixer with only a single bowl, I would suggest whipping the egg whites first, as they must be done in an absolutely clean bowl. Then transfer them to another bowl and beat the butter and sugar in the mixer bowl.

I think the trickiest part of this recipe for most cooks will be the glaze. The thing to keep in mind here is that you are walking a fine line between having something that is thin and melted enough to be pourable–or at least spreadable–and something that separates. The butter needs to be soft enough that you can beat it into the warm (but not hot) chocolate without making lumps. If the butter is too soft, or the chocolate too warm, the frosting will separate. If you get this perfect, you won’t need the ice bath, but you need to have it ready just in case. Remember, if the mixture gets too thick, you can always mix in a bit more whiskey, a teaspoonful at a time. Despite that one bit of finickiness, this recipe is really worth making. And it will really make you appreciate 18th-century cooks and the skill and energy they put into a simple cake, given that they had no stand mixers.

This chocolate mocha cake with Irish whiskey went down a storm with everyone who tried it. It’s very rich and chocolatey, with a lovely texture from the almonds and just the right amount of booziness. The coffee flavor is more of a boost to the chocolate than a strong flavor in its own right, though, of course, this will vary depending on the quality and strength of the coffee you use.

The cake rose in the oven but sank again when I took it out, so it was dense and fudgy in the middle. This may not have been the recipe’s intention–it does seem that whisking the egg whites should give a lighter, taller cake–but nobody complained. The glaze thickens to the consistency of melted chocolate when you whisk it over the bowl of ice water and, when poured over the cake, softly sets over time, though it is never fully dry. (Personally, I’d go with a boozy ganache next time for a quicker and simpler icing.)

Use a sharp knife to slice the cake and wipe it after each slice for a clean finish.