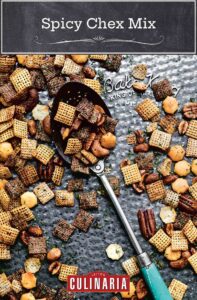 This homemade spicy Chex mix bears some resemblance to the original but is SO much more interesting. The combination of roasted nuts, toasted cereal, and the ideal amount of cayenne and chili seasoning means you may never go back to the classic.

[Editor’s Note: This spicy Chex mix was born of decades of life experience. And what results is every bit worth the wait.] Like so many other things in my life, Chex Mix was a love-at-first-bite experience. The familiarity of that crunchy corn flavor colliding with the explosive tanginess of concentrated Worcestershire was epic for my four-year-old taste buds. I have totally chased that combination of acid, fat, sweet, and sour since that moment. You can use whatever combination of your favorite Chex cereals you like. [Editor’s Note: We can all agree Wheat Chex is our least favorite, yes?!]–John Currence 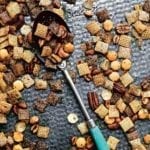 This homemade spicy Chex mix bears some resemblance to the original but is SO much more interesting. The combination of roasted nuts, toasted cereal, and the ideal amount of cayenne and chili seasoning means you may never go back to the classic.
Prep 25 mins
Cook 1 hr
Total 1 hr 25 mins
Snacks
American
28 servings
168 kcal
5 / 2 votes
Print Recipe

Chex Mix has become pretty ubiquitous in the snack world, but once you make this version, you’ll never have to buy a bag or make the recipe on the box again. No shortcuts here using spicy crackers from a box, pretzels, or anything like that. Using the trio of cashews, pecans, and peanuts is a pretty genius move, and then spicing them up with homemade chili powder (no need to use store-bought), cayenne, fresh black pepper, and paprika takes it to another level.

We loved the seasoning for the cereal and the oyster crackers but felt like a little more of the sauce would have been helpful. Of course it left an awful lot of Chex left over, so we had to make a batch of muddy buddies, too. So sad. Looking forward to making this Chex Mix again.

I used regular old paprika. The taste and texture of the Chex Mix didn’t change after a few days.

This was fun to make. I was pouring, measuring, mixing, and checking on the oven with a bounce to my step. It tasted irresistibly good, too, in that salty-snack-food-umami kind of way. It’s probably dangerous to have a batch of it hanging around, but, oh well…

My mom used to make Chex Mix years ago around the winter holidays. I think she found the original recipe in a magazine. I hadn’t eaten it in years and don’t recall the last time I made any. My familiarity with even the basic recipe was a little fuzzy going into this project.

The notion of cooking the nuts and cereals separately struck me as new, as did the inclusion of oyster crackers, but I may be way behind the times when it comes to Chex Mixes. I liked the inclusion of the crackers, which are a good size and shape to match with the cereal and nuts. The nuts had a pleasant heat to them from the infusion of buttery spicing. Those spices worked well with the Worcestershire and Tabasco that flavored the rest of the mix.

The resealable bag I used was just a little bigger than the contents and mixing it all together without crushing anything was tricky. I remixed the cereal and crackers with my hands once everything was laid out on the sheet pan to get a more even distribution of the butter mixture.

The cereal was dry and toasty after 40 minutes as advertised. I made a mistake, though, in not tossing the nuts together again on the sheet pan after they came out of the oven. There was still plenty of syrupy residue when I went to mix these with the cereal. Tossing them before that would have helped distribute the remaining moisture while they cooled.

The final product was still a little messier than I recall Chex mix being. Pouring the cooked mix onto paper towels to absorb excess butter might be a good idea.

I measured all of the ingredients by volume except for the butter, which I weighed. I melted the butter in a Pyrex measuring cup in the microwave. For the first portion, I spooned out 6 tablespoons from the cup. For the rest, I left the butter in the cup and added the seasonings, rather than transferring to a bowl. That also made for easier pouring over the cereal since the measure has a spout.

The taste has not degraded at all in several days.

This was a bit involved with all the ingredients and the two separate baking parts but the end result is tasty (and definitely grows on you). The family seemed to enjoy this as a quick “walk by” and grab-a-handful snack.

I would probably make this recipe again but might change up some of the spices and definitely sub in other nuts. I’d like to have some cheese maybe.

In my family, Chex Mix is sacred. You don’t mess with it (other than to remove the pretzels, but that’s another story) and you only make it for the holidays. But then this recipe came along and everything changed. But here’s the thing. This recipe isn’t for the faint of heart since it’s pretty spicy and it uses so many dishes. You may be angry when you see the stack of 2 baking sheets, 4 bowls, spatulas, and all the measuring cups and spoons you used. But it’s worth it.

OK, here’s the tea. This recipe makes a ton and can feed the crew when they come over to watch the game. However, it lasts, tightly covered in a big container, for a while, so you can munch on it every time you pass through the kitchen (or is that just me?). Yes, it uses a lot of salt. Don’t skimp. I used sweet paprika, but smoked would be lovely if your chili powder isn’t overly smoky. The dried parsley isn’t essential—truth be told, I forgot it and it was fine.

I think there’s too much spicy butter for the nuts. There was quite a bit left on the pan and I scraped every last bit into the big bowl. It’s not a total deal breaker since that extra buttery goodness soaks into the cereal. Pecan halves feel a little extravagant for this snack mix. Pieces, I think, would be fine.

Shaking the cereals and the crackers with their spicy butter in a gallon-size freezer bag is absolutely essential for getting even coverage. They do all get dry and toasty in the 40 minutes. Just be careful stirring on the baking sheet. The cereal escapees on the bottom of your oven do not smell good.

Here’s the bottom line. This Chex Mix won’t replace the classic because it’s real spicy and really not for everyone, but it’s great to have in your hip pocket. Use the nuts you like (and can afford). Even though wheat Chex are the worst, they are delicious when covered with Worcestershire, garlic, and Tabasco.