This Swiss meringue buttercream is a light, airy frosting made with egg whites, sugar, butter, and vanilla. Perfect for frosting a simple vanilla sheet cake, or for eating directly from the bowl.

A great vanilla cake deserves a very special buttercream, so I have turned to a super smooth and silky Swiss meringue version. As vanilla is the dominant flavor, this is a recipe for which I would splurge and use a vanilla pod for the buttercream.–Edd Kimber

WHAT’S THE DIFFERENCE BETWEEN SWISS MERINGUE BUTTERCREAM AND REGULAR BUTTERCREAM?

Regular buttercream is another way of saying what Americans typically refer to as frosting. It’s typically made from butter or shortening, confectioners’ sugar, and milk or cream, whereas Swiss meringue buttercream calls for the sugar to be cooked, which makes the resulting buttercream more stable and exceptionally satiny smooth. Swiss meringue buttercreams tend to be slightly less sweet than most frostings and more buttery in flavor, which is not at all a bad thing in our experience. Not at all. 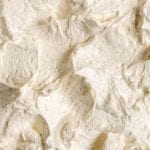 *What Can I Do With That Used Vanilla Pod?

I would need to swallow a thesaurus to have enough adjectives to describe this singular frosting. It is so good that it almost makes you want to abandon chocolate frosting.

The frosting is a snap to make. It’s light and seductive and doesn’t reveal the sinful amount of butter used in the recipe. I was anxious about the frosting because I have a love-hate relationship with egg whites. I fear them almost as much as meat cleavers and mandolines. No matter how many photos I look at, I am always trying to figure out when I have reached soft peaks versus stiff peaks. I cannot count the number of overbeaten disasters I’ve produced. That being said, I was not to be deterred and the egg whites had the good sense to surrender and give me a lovely shiny set of stiff peaks.

With the biggest hurdle conquered, I added the butter, salt, and vanilla as directed. The frosting was velvety smooth and the taste was more vanilla than butter. It makes the vanilla cake whole as the two flavors join together. It’s also a frosting which could be eaten directly from the bowl when no one is watching.

For anyone who is apprehensive about a Swiss buttercream, just take a leap of faith. Seriously. It’s so quick to make and even better to eat—straight out of the bowl or on your cake! I would gladly make this recipe again, perhaps in a sheet pan with double the frosting. That’s one place you don’t want to skimp. Using my stand mixer, after achieving stiff peaks, I whipped the butter in and had a perfect silkiness in about 7 minutes.