This best burger is named for very good reason. It’s made with a mix of short ribs, brisket, and chuck for an incredibly juicy burger experience that’s rich and lovely enough to serve naked. Though you can dress it with your favorite condiments if you must. 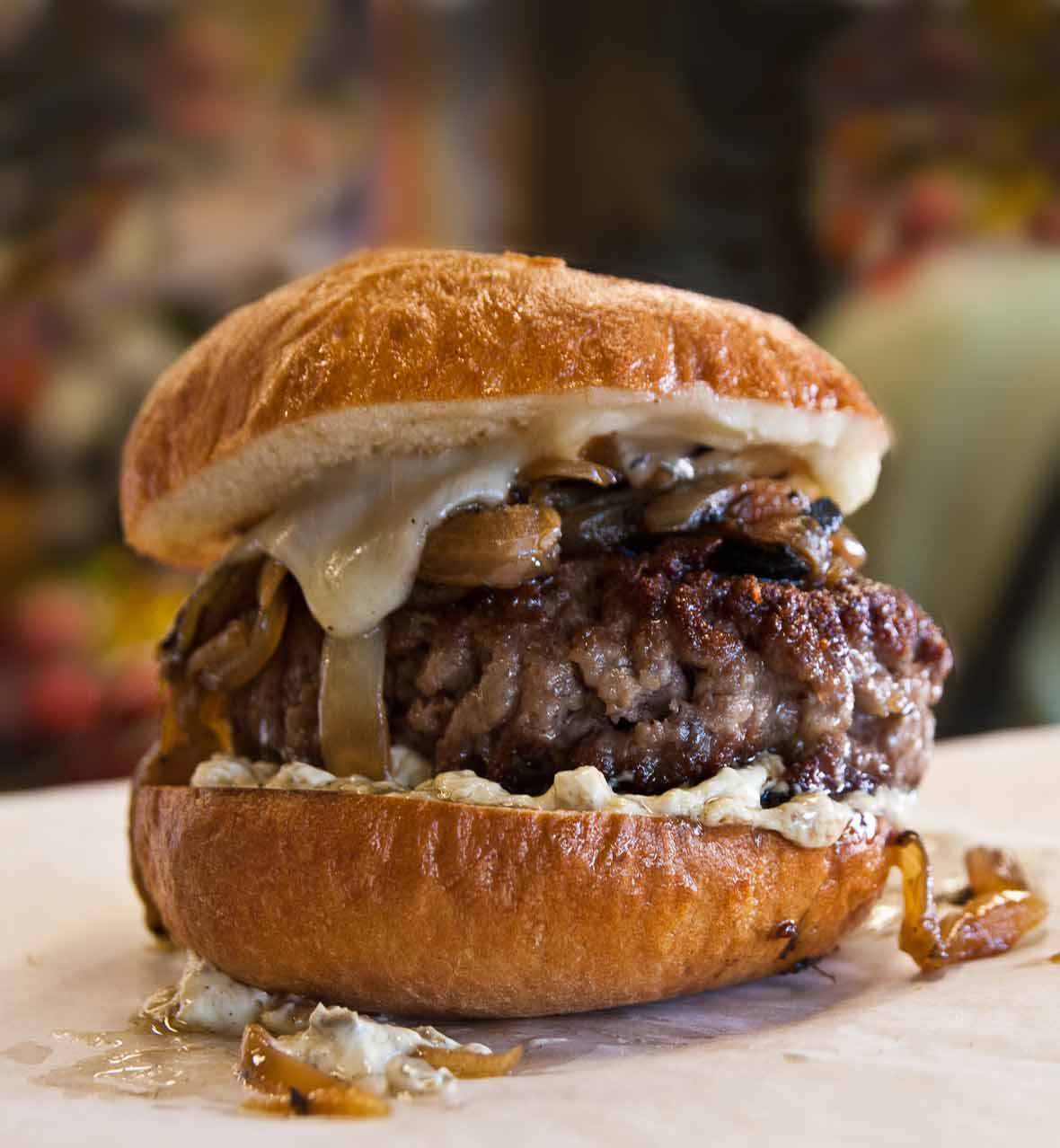 This aptly titled best burger isn’t just any old hamburger. This is an exquisitely complex burger conceived by the folks at Mission Street Food from ground short ribs and brisket and chuck, oh my. It’s then ever-so-gently shaped, expertly sizzled, and handily assembled. It’s sufficiently satiating to consume naked if you like (the burger, not you). Although if you like, you can dress it with your fave condiments, maybe even slapping the patty with a slice of Monterey Jack cheese, smothering it with sliced onions that’ve been coaxed to caramelized submission, and sandwiching it all with a pillowy yet sturdy toasted bun slathered with homemade mayo. Or feel free to do your own thing. Hungry? Us too.–Renee Schettler Rossi 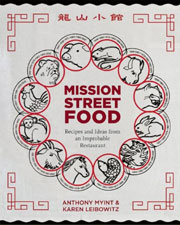 Using a sharp knife, remove any “silver skin” and any tough, gristly parts from the chuck, the brisket, and the short ribs. Reserve the skin and gristle for making beef stock or toss them in the trash.
Then slice off any large chunks of visible fat from the different cuts of meat. But don’t get too obsessive. Some fat ought to remain on the meat. Reserve the trimmed fat.
Cut the chuck, brisket, and short ribs into 1-inch chunks, keeping the cuts of meat separate. Weigh the meat, still keeping the kinds separate. You should end up with a total of about 7 pounds.
Place the meat on a wire rack set over a rimmed baking sheet, still keeping the three kinds separate. Salt the meat, using a ratio of 1/2 cup of salt for 7 pounds of meat. (If you have more than 7 pounds of meat, use a little more salt; if you have less than 7 pounds, use a little less salt. You need just under a tablespoon of kosher salt per pound of beef.)
Refrigerate the meat, uncovered, for 2 days. Cover and refrigerate the reserved fat.
When you’re ready to grind the meat, cut 1 1/2 pounds of the reserved fat into 1/2-inch chunks. (If you have more than 7 pounds of meat, use a little more fat; if you have less than 7 pounds of meat, use a little less fat.)
Set up your meat grinder, whether it’s the old-fashioned sort that clamps onto your counter or an attachment for your food processor or stand mixer.
Grind the 1 1/2 pounds of cubed fat with the brisket and the short ribs and let it fall into a large bowl. Set the bowl off to the side.
Now fashion a wide landing strip of sorts from plastic wrap on your work surface beneath your grinder, using multiple overlapping layers of plastic wrap.
Pass the mixture of ground brisket and short ribs and fat through the grinder again, this time adding the chuck. As the ground meat emerges from the grinder, carefully let the columns of ground meat fall alongside one another on the plastic wrap in a parallel formation.
Stack the meat columns to create a single large column of ground meat that’s about 5 inches in diameter. Gently wrap the ground meat in plastic wrap, pressing firmly enough so the column holds together but not so firmly that you compress it too much.
Refrigerate the ground meat for at least an hour and up to a couple of days. (Or you can freeze the meat for up to 3 months.)
When you’re ready to cook the burgers, unwrap the ground meat and, using a sharp knife, slice it into as many burger patties as you like, each 3/4 to 1 inch thick.
Melt some of the reserved fat on a griddle or in a large, preferably cast-iron skillet over medium-high heat. At the same time, heat another large but dry griddle or skillet over medium heat. Sear each patty, without budging it, until a crust forms, 60 to 90 seconds.
Using a thin metal spatula, flip the patties and carefully sear the other side for 45 to 60 seconds. Transfer the patties to the ungreased skillet over medium heat to finish cooking to the desired doneness and to allow some of the grease to drain. The exact amount of time depends on how you like your burger.
Transfer the burgers to a warm place for another 2 minutes to rest and drain, such as a wire cooling rack set on a rimmed baking sheet in a low oven.
☞ Tester tip: Never grill these burgers. The fat and moisture will drip right out. Searing the burgers in a generous amount of fat creates that all-important moisture-sealing crust that ensures rich, juicy, flavorful burgers.
Assemble your burger however you darn well please with pickles and any condiments. Originally published  August 6, 2012.
Print Recipe

Another 10! We did a side-by-side taste test. The Best Burger versus a freshly ground chuck burger, no frills. The Best Burger won, hands down. Without a doubt, it is the best burger I have ever eaten. (There was moaning involved.)

I am great friends with my butcher and he willingly ground the meat for me. I came home with 7 pounds of meat, cooked it up for 3 of us, and still have lots in the freezer. (I would halve the recipe in the future.) Disclaimer: My butcher only sells local, grass-fed meat. Aren’t I lucky. :)

Thank you, thank you! I've been searching for the perfect burger recipe for decades! This knocked our socks off...my husband's eyes literally rolled back into his head when he took his first bite. It was juicy, toothsome, and epically delicious!

I halved the recipe and still had 6 rather large burgers; 3 to grill and 3 to freeze. I'd highly recommend serving these beauties on homemade hamburger rolls (you'll conveniently find an excellent recipe here!) with your favorite toppings. Or naked. They're perfect naked, and let's face it, not much is!

I don’t rate many recipes a “10,” but this certainly warrants it. The different cuts of meat and the ability to adjust the fat content to your personal preference makes this recipe worth the effort. This also allows you to keep the grind coarse so your burger isn’t packed too tight, which makes it tough when you cook it.

It's important to follow the cooking instructions. Resist the urge to press your burgers, as this pushes the fat and moisture out and you’ll end up with dry burgers. Letting the burger rest keeps them moist, just as with resting a steak or any other kind of meat.

These are BIG burgers. I quartered this recipe and still had large burgers and way more than the 4 burgers I was expecting. I ended up with almost 3 pounds of meat.

This best burger recipe takes time and an extraordinary amount of meat but it is definitely worth it. This is the burger recipe that you pull out to impress the people you like the most.
I served these on fresh rolls from the bakery and everyone dressed their own from an assortment of toppings. However, the consensus was that these burgers need very little in the way of accompaniment.

I ended up making the entire recipe (my butcher is a saint!!) so that I could try it with 2 different amounts of salt. I followed the directions exactly, not packing the burgers too tightly, and then placed the meat in the fridge for nearly 2 hours. I cooked 8 at a time to a medium-rare on my large cast iron grill before putting them on a wire rack in a low oven while I cooked the remaining 8.

I used Windsor salt, which is our version of Morton's, because I haven't been able to find Diamond kosher salt here yet. I tested with 2 different amounts of salt, as follows—please be aware that these are the numbers adjusted for the full recipe (16 burgers).

For the second version, I used 7 tbsp, which weighed 105 grams. This is not quite 1/2 cup. I found this version pretty salty but not inedible.

Honestly, I think somewhere in between would be perfection for me. I will probably use 90 grams or so (of Windsor, until I can find Diamond) the next time I make these. And I will make these again!!