Two of perhaps the most indulgent desserts collide lovingly in this insanely rich, fudgy, creamy Junior’s brownie swirl cheesecake creation based on a constant at New York City’s famous Junior’s deli. The dark chocolate brownies form both the foundation of the cheesecake as well as intermittent punctuation marks throughout the cheesecake batter. A swirl of dark chocolate at the very top only hits at the loveliness lurking beneath.–Renee Schettler Rossi 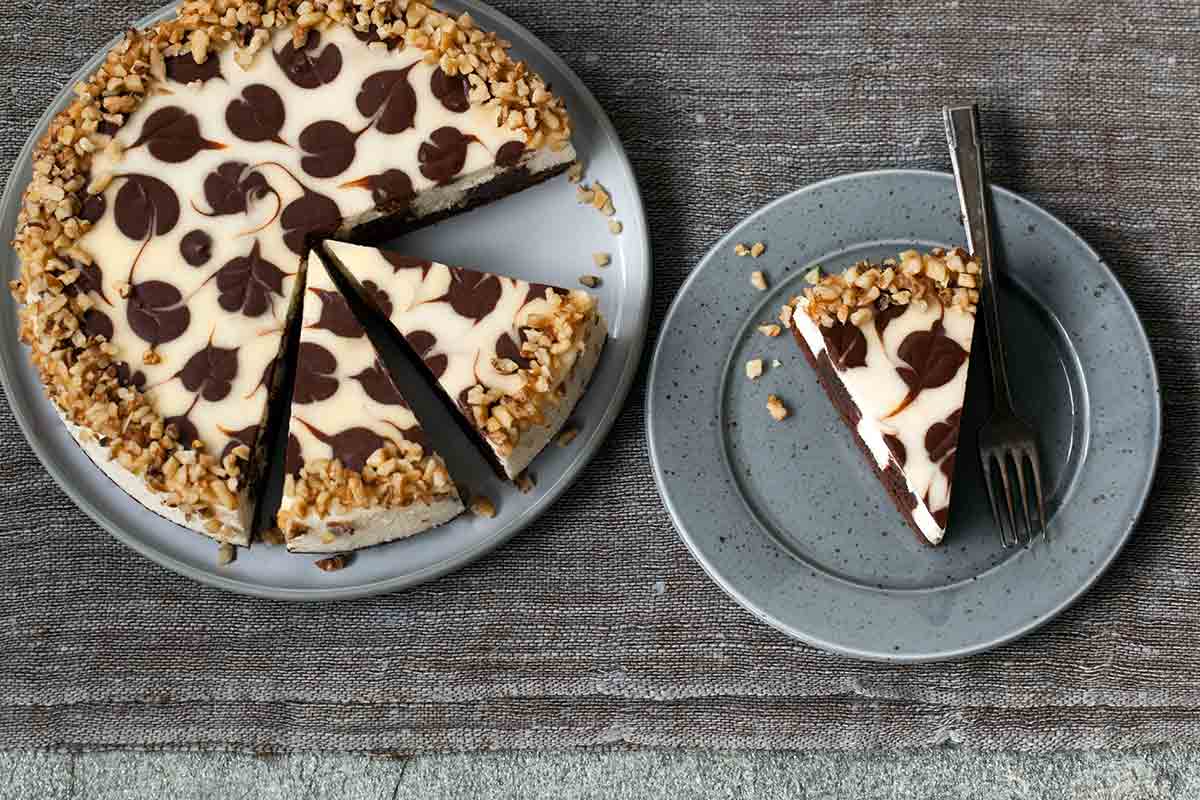 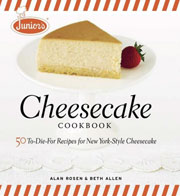 For the brownie crust and chunks

Junior’s brownie swirl cheesecake is divine. Fun, festive, and perfect for entertaining or a special family occasion. The recipe is easy to follow, broken down into manageable sections so it’s quite simple to throw together during a busy week.

I’m not usually a fan of cheesecakes that are full of other ingredients. I love a good classic cheesecake and I think a lot of them are cloyingly sweet or overly rich. This wasn’t like that at all. The texture of the brownie and the cheesecake melded beautifully and the taste was decadently balanced. I highly recommend this recipe. It would serve 8 to 10.

This cheesecake was quite good. It had a firm, very creamy texture after an overnight chilling in refrigerator. (I believe the cornstarch might have been responsible for the smooth, creaminess, but I’m not really sure.) I was glad to see the recipe had no sour cream in it, as that seems to me to take away from the firm way a cheesecake “breaks” apart when a fork is used to take a bite. (I would suggest decreasing the cornstarch a little.) But it was still good. I will wait a day to see if that changes. Cheesecakes, it seems, tend to develop more texture after a while in the fridge. (Next day: After being refrigerated for 2 days, the texture didn’t seem to have changed too much.

I couldn’t resist putting more than the suggested number of brownies in the bottom of the pan. (They were sooo good.) But I would still, I think, increase the cheesecake amount by about 1/2 at least.

I thought the amount of the saved-and-set-aside aside white cheescake batter to mix with the chocolate could have been decreased to about 2/3 cup or maybe a little less. It seemed there was a little too much chocolate/cheesecake ratio in the whole cake. But I just love plain cheesecake without much adornment–except fresh strawberry sauce!

I was glad to see that there wasn’t a side crust on this recipe. It isn’t really necessary with a cheesecake being so rich to start with.

Junior’s brownie swirl cheesecake made a smooth, delicious, decadent cheesecake with swirls of chocolate and a brownie crust that was to die for. The Brownie Crust recipe makes moist, chocolatey, and delicious brownies. I will be using this recipe the next time I want to make some brownies and kissing the store-brought brownie mixes goodbye.

I’ve ordered Junior’s cheesecakes online for special occasions and holidays. This recipe yields a very close, if not exact, version of what you’d get from Junior’s at one of their restaurants or via online ordering.

The number of servings will vary based on the size of the slices, but it will be at least 12 normal size cheesecake servings.