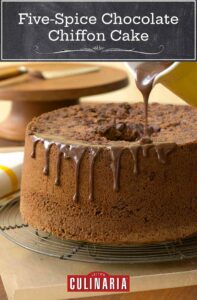 Five-spice chocolate chiffon cake combines earthy spices, dark chocolate, and a rich creamy glaze. The lofty cake is terrific on its own but the addition of the glaze makes it out-of-this-world good.

Cinnamon, aniseed, cloves, ginger, and fennel seed, ground together to make one of the many variations of Chinese five-spice powder, may sound like an odd combination in conjunction with chocolate. Not so. The blend adds a mysterious, subtle, appealing flavor to this moist, light chiffon cake.–Elinor Klivans

What is Chinese five-spive powder?

Chinese five-spice powder is a mix of five or more spices commonly used in Chinese cooking. It usually includes star anise, cloves, fennel cinnamon, and Sichuan pepper, although it can include other spices.

How do I keep my chiffon cake form sinking?

Chiffon cakes bake in a large, ungreased tube pan. This allows the cake to climb up the sides of the pan and remain there while it cools. (Don’t grease your pan by mistake. The cake will rise extremely high, then slide down the pan and collapse as soon as it comes out of the oven. Avoid nonstick tube pans for the same reason.) Chiffon cakes then cool in the pan while turned upside down so they don’t collapse under their own weight. Although delicate when warm, chiffon cakes are quite sturdy once they cool. 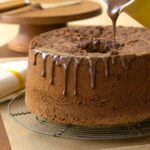 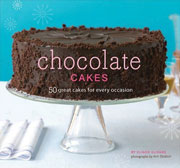 For the chocolate chiffon cake

For the final five-spice flourish

Give the cake its final five-spice flourish

I love chiffon cakes (mainly because I don’t end up with leftover yolks or egg whites), and this one turned out beautifully: light and fluffy, with a nice crumb and slight chew. After cooling, the cake ended up a little dry. In retrospect, I’d probably leave the chocolate bits out (or melt them down and fold into the yolk batter) and pull the cake after an hour of baking.

Everyone loved the subtle five-spice flavor, and sprinkling it over the glaze was so lovely. The glaze was so easy to make and when it cooled, it was firm and glossy—so if you glaze the cake ahead of time, it’ll firm up enough to cover with plastic wrap without messing up the finish. I loved this cake so much, I kept sneaking slices over the weekend.

I served it with malted ice cream (vanilla ice cream made with malt syrup) and it complemented the chocolate very nicely. I also didn’t invert the cake before spreading the glaze, but it all turned out fine.

This cake is like eating a chocolate cloud. The spicing is subtle, not too assertive, enough to render it chocolatey but not ultra-chocolatey. Due to unexpected oven problems, I’m not able to say whether the cooking time is correct. What saved me, however, are the alternative instructions for determining doneness (i.e., firm to the touch, and any cracks on top are dry). With these directions and a bit of guesswork, I ended up with a moist cake that was perfectly done. I really appreciate recipes that provide multiple ways of determining doneness, and this was a perfect example of why.

The recipe is resilient, which surprised me a bit, given the critical role of egg whites. Despite my problems with execution, this was a delicious, wonderfully soft cake. As I was preparing, baking, and waiting to glaze the cake, the aroma of five-spice powder pervaded my kitchen. I became concerned that it would be too strong a flavor in the final cake, but my concerns were unfounded. It was just right.