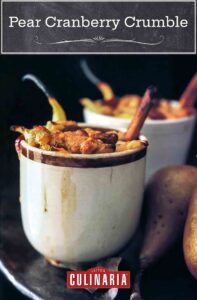 This pear-cranberry crumble is not quite your classic Thanksgiving dessert. And that’s what we love about it, the whole unexpectedness of it. It’s still full of fall flavors, like cinnamon and nutmeg along with the lushness of pear and cranberry. Sometimes, a break from tradition is a very delicious thing, indeed.

You can also make the crumble in individual ramekins or ovenproof mugs as shown; just be certain to check on them earlier, as the wee crumbles will likely bake more quickly.—Gordon Hamersley

Can I make pear-cranberry crumble ahead of time?

You can, but what we suggest is making the topping ahead of time (up to two days), storing it in an airtight container, and popping it into the fridge. Cutting the fruit and putting the rest of it together before baking will give you the best results.

Do I have to peel pears before using them?

It might seem like a small detail but we really do suggest that you peel those pears before baking. Pear peels have a tendency to get a little bit tough when heated, leading to an unpleasant texture and taste.

What are the best pears to use in a crumble?

It all depends on the texture that you want in your finished crumble. Want the pears to retain their shape and a bit of firm texture? Try Bosc, Anjou, or concorde. A bartlett pear gets pretty mushy when heated (they’re the best for pear butter) so make sure that’s the texture you’re after if using them. We’d recommend mixing a firmer pear with a softer pear—one of our testers did and thought it was divine. 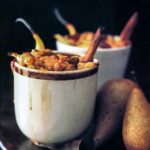 This is a lovely dessert to put together on a fall night, when pears are ripe and the cinnamon adds a deep warmth to the flavors. Serving it warm is most delicious, but if you can’t, no worries—it still tastes great.
Prep 15 mins
Cook 40 mins
Total 55 mins
Dessert
American
8 servings
451 kcal
5 / 2 votes
Print Recipe 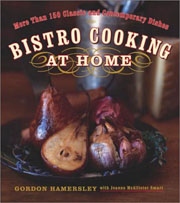 For the crumble topping

This crumble is a simply scrumptious dessert that I will make again and again. The tender cinnamon and nutmeg-tinged pears coupled with the chewy cranberries become even more irresistible with the sweet blanket of buttery oat topping.

This is a dish that piques and satisfies all the senses, from the mouth-watering appearance as the juices bubble up through the crumble topping, to the luscious texture that melts in your mouth with every bite. Dollop with sour cream for an even more surreal dessert experience.

This dessert would make a perfect ending to any meal, especially on a cold winter’s night. The filling ingredients blended perfectly allowing each taste to still be noticed. The tart cranberries and sweet pears paired beautifully. A hint of cinnamon and nutmeg rounded out their flavors. The topping filled the kitchen with a butter-and-brown-sugar aroma while baking and added just the right amount of crunch to the tenderness of the fruit.

Served with freshly whipped cream, this crumble was a warm comfort food treat!

Pear crumble sounded like terrific comfort food for a cold winter evening. And it was. This treat can easily be put together in minutes on a busy work night. The not overly sweet crumble topping is a do-ahead dish. (I had mine in the fridge two days waiting for the pears to ripen.)

And the filling couldn’t be simpler. Just toss it all together and bake. Since the recipe didn’t specify, I used six large pears, half Bartlett, half Anjou. Luscious, sweet pear juices bubbled up through the buttery topping. Fragrant with nutmeg and cinnamon, it needed no embellishment, but we indulged in a little scoop of vanilla ice cream alongside anyway. Truly a satisfying bistro finale.

Amazing! This dessert is absolutely fantastic. The rich crumble topping melts in your mouth while the burst of flavor from the pears and cranberries puts a satisfied smile on your face. Everyone will be asking for seconds. This was an easy, homey, satisfying dessert that can be done partially ahead of time.

The steps were very simple, and seeing the pinch of salt added to the topping made me trust the author, as I firmly believe in judicious additions of salt to sweet dishes. Finally, my guests really enjoyed the combination of mild pears and intense cranberries (a nice change from apples), especially with vanilla ice cream.