This perfect roast turkey recipe from Martha Stewart is brined, stuffed with a chestnut stuffing, roasted to perfection, and smothered in gravy. Ah, Thanksgiving.

It’s a safe bet that every cook will be called upon to roast a turkey at some point in his or her life. Since it’s usually a once-a-year endeavor, there’s not much room for practice. Rely instead on proven methods and careful planning.–Martha Stewart with Sarah Carey

LC SHE’S NOT KIDDING AROUND NOTE

Martha’s not kidding around when she mentions planning ahead. Here, in her words, is what she means by “careful planning.”

Brining the meat ensures that the turkey will be tender and juicy. The brining solution contains aromatics for more flavor, but you could forgo those and simply sea mixture of salt, sugar, and water.

This is also an instance where it’s crucial to make sure you have the right equipment (a pot large enough to hold the brining turkey, plus a spot in the refrigerator to place it; a heavy lasting pan; cheesecloth for “basting” the bird as it cooks; and an instant-read thermometer) and sufficient time (a day for brining and then at least 5 hours for bringing the bird to room temperature and roasting it).

Also, take care of as much as possible in advance, such as preparing the stuffing the day before and refrigerating it overnight while the turkey is brining. You will also need to dry the bread for the stuffing overnight earlier in the week, then transfer it to a resealable plastic bag until it’s needed. This means it will be much easier when the time comes to focus on the task at hand: roasting the perfect turkey.

One more safety note: Never stuff a turkey ahead of time. Warm stuffing should not be put into a turkey until just before roasting, and then get the bird and into the oven as soon as possible. Chilling warm stuffing before cooking it in a turkey is not safe because the stuffing will, through cooling and heating, spend too much time at temperatures at which bacteria thrive (between 40°F and 140°F [5°C and 60°C ).

A fresh turkey is preferable to a frozen one, but if you have to resort to frozen, here’s how to defrost it properly: Leave it in its original wrapper, and place it breast side up on a rimmed baking sheet (to catch any juices) in the refrigerator. Be sure to plan ahead. Allow 1 day of thawing per 4 pounds of turkey.

A delicious gravy begins with flavorful stock. You can do this while the turkey is roasting. Also, reserve 3 tablespoons of the pan drippings from the turkey roasting pan (after the turkey has been removed to a platter), as well as the pan itself. Pour remaining drippings into a gravy separator and let stand until fat has risen to the top, about 10 minutes, or pour into a glass measuring cup and discard the fat that rises to the top. 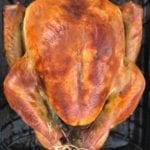 It's a safe bet that every cook will be called upon to roast a turkey at some point in his or her life. Since it's usually a once-a-year endeavor, there's not much room for practice.
Martha Stewart with Sarah Carey
Prep 1 hr 20 mins
Cook 4 hrs 40 mins
Total 1 d 6 hrs
Mains
American
12 to 14 servings
840 kcal
5 from 1 vote
Print Recipe 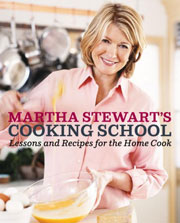 For the chestnut stuffing

Stuff and roast the turkey

I used a 12-pound bird and stuffed it with my own bread stuffing. I followed the directions for using the cheesecloth and it produced a very moist and tender turkey. The skin was a beautiful, crisp golden brown. This is a foolproof recipe for a beginner or an experienced cook alike.