For this Catalan veal stew with prunes and potatoes, veal breast is seared then slowly braised in a brew filled with tomatoes, brandy, wine, cinnamon, cayenne pepper, and a bit of chocolate. 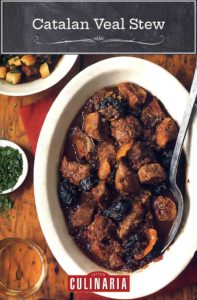 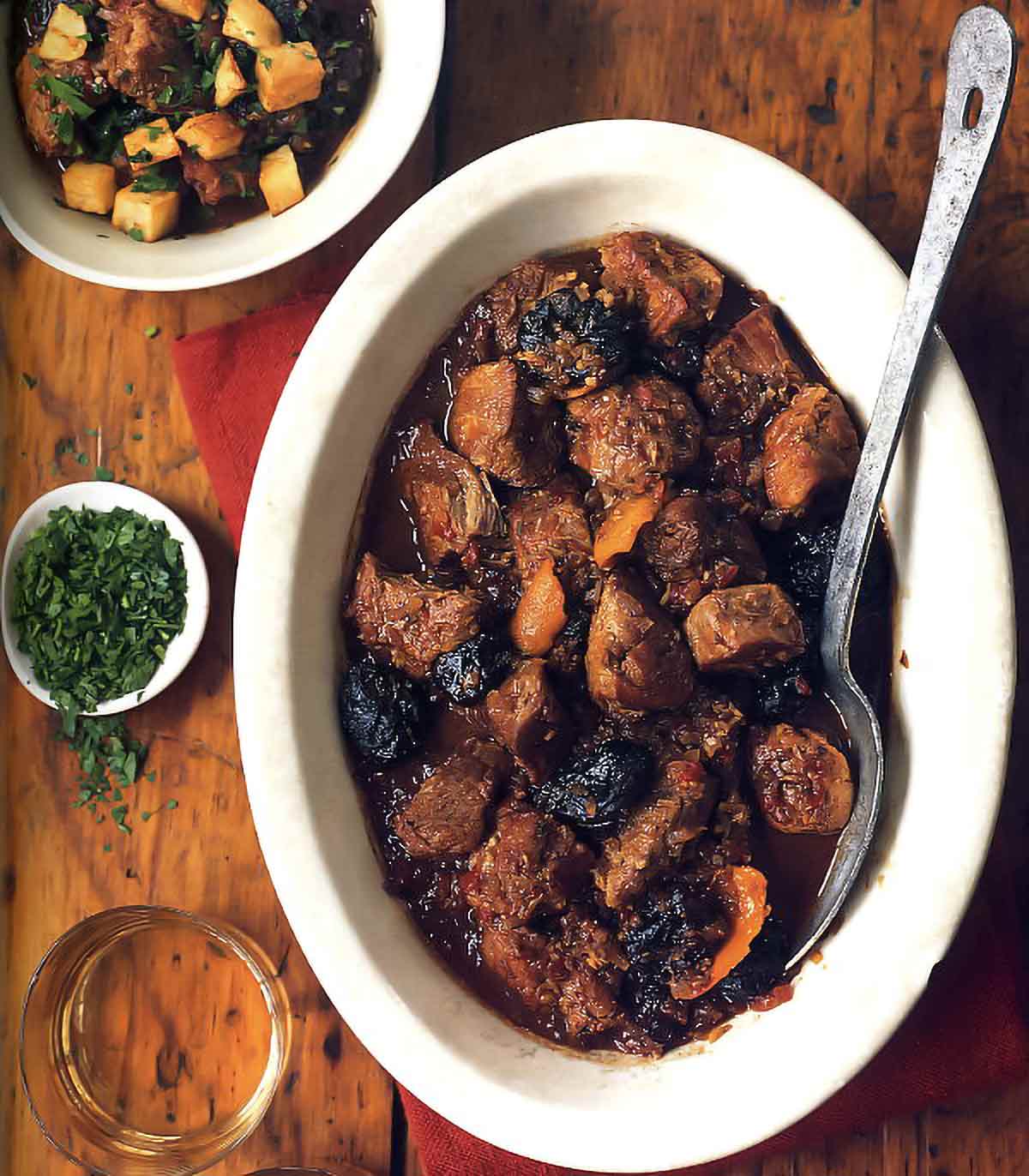 Adapted from The Lobels | Lobel's Meat and Wine | Chronicle, 2006

For this Catalan veal stew recipe, we call for chocolate. Using unsweetened chocolate as an ingredient in savory European dishes dates back to the sixteenth century, when Spanish explorers first carried it back to Europe from Mexico. Today, the Catalan people of northeastern Spain continue to use chocolate in a number of preparations where its ability to thicken, flavor, and generally fill in the gaps is valued in stew making. Not immediately recognizable in the finished dish, the chocolate helps it become, like any good stew, truly greater than the sum of its parts, mingling here with the sweetness of prunes and succulent chunks of veal.–Stanley, Leon, Evan, Mark, and David Lobel

Meat from the breast and shoulder makes for the most flavorful veal stews. Breast meat, because of its higher fat and collagen content, cooks to a more tender, rich, and meltingly soft result, which for many is the hallmark of a great stew. On the other hand, cubed breast meat tends to fall apart, so that the finished dish has fewer prominent chunks of meat than stews made with other cuts. Additionally, veal breast has alternating layers of fat and lean, much like pork belly, and you may find yourself having to separate the soft flavorful meat from the remaining pieces of fat as you eat. None of this poses a problem for us, though, because the taste and texture of a stew made with veal breast is rich, silky, and simply without peer.

For a chunkier Catalan stew and less fat to contend with, choose shoulder meat. It is nearly as good as breast meat, and the cubes retain their shape and gently collapse in your mouth. Because the veal shoulder has less fat, as it cooks there’s less skimming in the end. Each cut is delicious and distinct in its own way. If you purchase boneless veal breast or shoulder, you will need 2 1/2 pounds of meat and 1 1/2 pounds of bones; ask your butcher to save the bones for you. 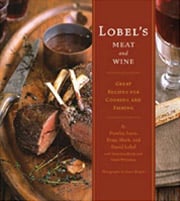 In a flameproof casserole or Dutch oven with a tight-fitting lid, warm 3 tablespoons of the olive oil over medium-high heat. Working in two batches, cook the veal and veal bones until golden brown on at least two sides, about 5 minutes per side, reducing the heat if needed. Scoop onto a large plate and set aside.

Let the casserole cool slightly and return it to medium heat. Add the onion and garlic and cook, stirring occasionally, until pale gold at the edges, about 10 minutes. Add the brandy and wine, and simmer until the liquid has reduced by half, about 10 minutes longer, scraping the bottom of the pot to loosen any browned bits.

Stir in the tomatoes, orange zest, thyme, bay leaf, and 1 tablespoon salt, then add the meat, bones, and any juices accumulated on the plate. Add just enough water to cover the meat (cover the meat only; it’s okay if the large bones stick up). Bring to a bare simmer, cover, and move to the oven.

After 20 minutes, reduce the heat to 250°F (120°C) and continue to cook until the meat is somewhat tender but not yet falling apart, about 2 hours more. Adjust the oven temperature as needed to maintain a bare simmer.

Remove the pot from the oven and let rest, uncovered, for at least 15 minutes. Skim off most of the fat collected on the surface. Pick off any meat remaining on the bones and add it to the pot. Discard the bones, thyme sprigs, and bay leaf.

Meanwhile, in a large skillet, heat the remaining 3 tablespoons of olive oil over medium-high heat until just smoking. Add the potatoes and, using a spatula, toss them until coated with the oil. Reduce the heat to medium and fry the potatoes, tossing them constantly, until they’re golden and crispy on at least two sides and tender within, about 20 minutes, reducing the heat if they threaten to burn. As they finish cooking, sprinkle them with salt to taste. Set the potatoes aside in their skillet.

Return the casserole to the stove top over medium heat and return the stew to a simmer. Stir in the chocolate, cinnamon, cayenne, and drained prunes. Simmer, uncovered, stirring occasionally, until the liquid has thickened slightly so that it is midway between a broth and a sauce, about 30 minutes. If necessary, add salt to taste. If the pieces of veal seem a bit dry and firm, break them up somewhat with the back of a wooden spoon to help them absorb the sauce.

To serve, reheat the potatoes to re-crisp them, if necessary, and ladle the stew into large, shallow serving bowls. Top each serving with a handful of potatoes and a sprinkling of the parsley. Serve immediately, passing any remaining potatoes at the table.

This is a great dish. The veal is incredibly tender and after the lengthy cooking time, some of the cubes will break off and become part of the silky and flavorful sauce. You won't notice the chocolate that is added at the end as it melds with the liquid and takes the dish to another level.

All of that said, this is a cut of meat that won't magically appear on supermarket shelves as I had hoped (I used veal shoulder) and you'll need to have a good butcher to provide you the right cut of veal. I'm fortunate to live only a few miles away from an abattoir which is open to retail customers three days a week. My lovely butcher offered to remove the meat from the bones, cut it into cubes and cut the bones to a size that fit perfectly in my Le Creuset Dutch Oven. That made the dish fairly easy to assemble and in 5 1/2 hours, we had the makings of a phenomenal meal. Definitely worth the time and effort. Like any stew, this dish is equally—if not more, flavorful as a leftover and can be held in the freezer for quite a while.

This stew was silky, sweet, and savory. The veal was wonderfully tender, and the warm notes from the cinnamon and chocolate paired well with the faint zing of orange. I'd feared the prunes would overpower the flavor, but they didn't, and instead added a smooth richness, akin to balsamic. Crisp potatoes were an excellent contrast atop the soft stew.

A few notes to start—this recipe seemed so unique that I wanted to research ahead of making it. I only found one other record of it outside of Leite's website (referencing Loebel's Meat+Wine), and that was in Honey From a Weed (1986) on ckbk.com. The recipe was almost identical, but much more rustic in its direction. I'd wager that Loebel's got their recipe from Patience Gray's book, and I'd encourage you to take a look at it, just to experience the original writing.

Loebel's instructs us to use cayenne pepper, when paprika is normally used in Spain. Gray uses paprika, so that's what I went with (she has 1/2 tsp paprika, so I middled at 1/8 tsp hot, and 1/4 tsp sweet). To make it an authentic Catalan stew, please use paprika. Another interesting difference was that Gray uses 50 grams of BITTER chocolate (more than double what's called for here, but without the sugar). It would be interesting to try this method in the future (I wasn't feeling so daring this time around, and did not want to drift TOO far from the instruction).