This sweet potato soufflé with pecans is an easy Thanksgiving side dish (or dessert!) that’s simply sweet potatoes turned into a purée with some butter, sugar, vanilla and then buried beneath a satisfyingly buttery and not-too-sweet pecan and brown sugar streusel 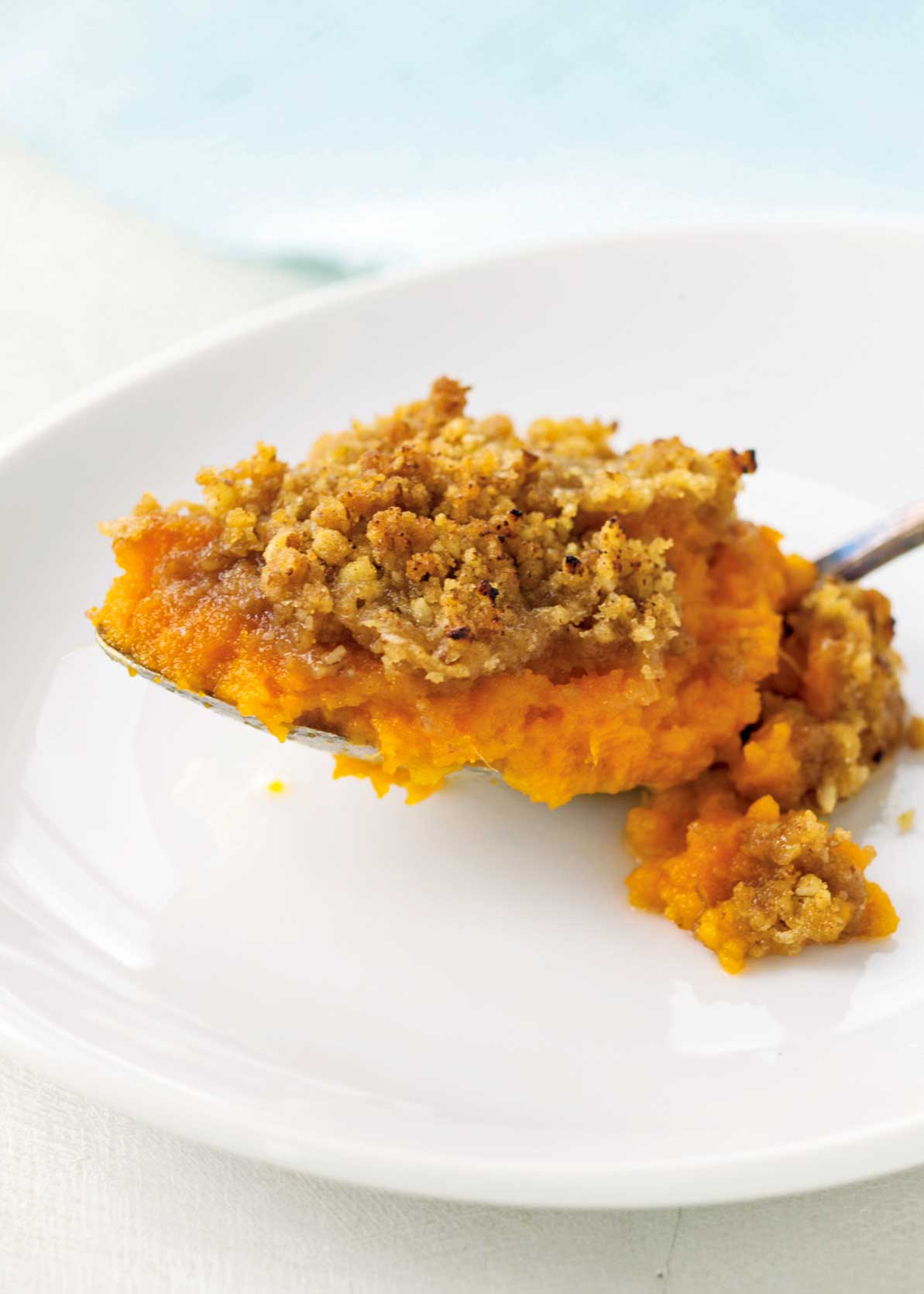 Side dish or dessert? This sweet potato soufflé easily stands in as either on your Thanksgiving table. Mind you, it’s not too sweet. No sirree. Just sweet enough. Omit the streusel  topping and you have a lovely little sweet potato purée perfect for weeknights.–Renee Schettler Rossi 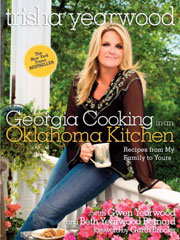 Make the sweet potato purée
Preheat the oven to 400°F (200°C). Butter a 2 1/2-quart baking dish.
Bake the sweet potatoes on a foil-covered baking sheet for 1 hour, or until they’re soft throughout. Let stand until cool enough to handle.
Slip the peels from the potatoes, discarding the peels. Place the sweet potatoes in a large bowl or the bowl of a stand mixer and mash until very smooth. Add the eggs, sugar, butter, vanilla, milk, and salt and mix with a stand mixer or handheld electric mixer until smooth. Scrape the sweet potato mixture into the baking dish.
Make the pecan streusel
In a medium, bowl, stir together the pecans, brown sugar, flour, and butter until thoroughly combined.
Make the sweet potato soufflé
Spoon the streusel over the sweet potato mixture, smoothing it evenly. Bake the soufflé until the surface is golden brown, about 30 minutes. Let it rest for at least 5 minutes before serving it straight from the dish. Originally published May 9, 2008.
Print Recipe

This dish provides the best of both worlds. It’s a wonderful side dish AND dessert all wrapped up in one yummy dish.

I often make candied yams and this dish reminds me of them, although the addition of the pecan topping adds a nice touch.

If asked whether this is a dessert or a side dish, it’d be hard to say. It could easily be served with ice cream as a dessert or would provide a nice sweet accompaniment to the savory elements of a Thanksgiving dinner.

This was very easy to prepare. I served it alongside a whole roasted chicken.

This was as good as dessert!

I watch Trisha Yearwood on the Food Network and she is a great comfort food cook. I also have her first cookbook. The topping with the pecans brought it over the top, as it was nice and crisp, but really just the purée with the butter, eggs, and milk would be wonderful for a less-sweet side dish for any night.

I thought I would miss the usual cinnamon and spice but it sure didn’t need it. I’m very happy with this recipe and will keep it in mind for Thanksgiving.

A very easy recipe for the holidays. It was pleasantly sweet but not overly so. The texture was light and pleasing. The topping really makes the dish.

A quick review of the ingredients left me expecting a pretty sinful side dish, and I wasn’t proven wrong. The topping was like candy, so maybe this would be more appropriately categorized as a dessert!

For special occasions, I would probably not change anything about the recipe. However, as someone who loves plain baked sweet potatoes, I do think the white sugar could easily be cut back by at least half if you wanted to cook this more frequently and have it be a little more healthy. It’s so simple to put together. I was short on time and actually microwaved my potatoes, wrapped in plastic wrap, with no problems.

This sweet potato souffle is really good. Itʻs so good that it tastes good cold. Itʻs a little more involved than a regular sweet potato casserole for a big meal like Thanksgiving but it is worth the effort. I would definitely make this again. I would cut the recipe in half, though.

I reduced the amount of sugar by 1 ounce and the nutmeg to 1/2 teaspoon.

The serving size is more like 12 to 14 for us but we eat less here. If you doubled the recipe, you could serve a huge crowd.

For starters, and whether or not it really matters, to me this is more of a pudding and not so much what I think of with the word soufflé. That being said, for those seeking a sweet potato dish that differs from that standard, I think this is far, far better than the holiday dish with sweet potatoes and brown sugar and marshmallows. But this is still A LOT of sugar plus butter for yet more richness.

I ended up using 1/2 teaspoon nutmeg, but afterwards felt there could have been a bit more, so maybe that teaspoon that’s called for isn’t so terribly much after all. I would prefer to bake the sweet potatoes, and a friend suggested using a pressure cooker. As for the ramekins, and since I did not have two, “large,” ramekins available, I used a total of six. I used: one 8-1/2”x4”, one 5”x 3”, two 4”x2-1/2”, and two 2”x2”. The baking times, were, in the same order as the ramekin listing one hour and 40 minutes, one hour, 45 minutes, and 40 minutes. None were covered and none over-browned. There was definitely a little bit of puffing up and a loss of wobbling when I decided to remove them from the oven. These were rich, too rich for my testing partner, who would strongly have preferred a plain baked sweet potato, but neither of us felt whipped cream would enhance this soufflé (pudding). They did look just like the picture, though, based on the size of the spoons and tray, I think mine made more, a lot more, than what is depicted there. And, because it is so very rich, I think the serving count of 10 to 12 is low: I think this could serve a lot more, as a little of this richness goes a long long way. In fact, it could easily be served (and I would recommend this) as a dessert, ie, in lieu of a pie, rather than as a sweet potato side with a holiday meal.

Back to Sweet Potato Soufflé on Leite's Culinaria