This guinea hen with sweet corn fregula is an easy meal of grilled guinea hen or chicken legs and a simple side of small pasta with sweet summer corn.

Guinea hen? It’s lovely. It tastes a little like pheasant and looks a lot like chicken, though it’s far less tough and dry than pheasant and infinitely more intriguing than chicken (though chicken legs work quite well in lieu of guinea). As Mario Batali says quite simply in The Babbo Cookbook, from which this recipe hails, “We love guinea hen legs because they’re so moist and juicy.”–Mario Batali

Never seen guinea at your local market or butcher? That may have a lot to do with the fact that you’ve never looked for it. It’s often there, particularly in late summer and fall. If not, just ask. Often a simple request is all it takes to get your butcher to stock it or, at the very least, to special order it for you. Once it’s in, smile sweetly and ask him to bone it for you—though we’re offering no guarantees on that front. And don’t write off fregula just yet. Also sometimes known as fregola, it’s a diminutive and different kind of semolina pasta. If you can’t find it—and you don’t know that until you try, right?—Israeli couscous works splendidly in its place. 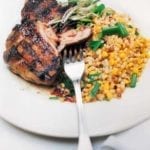 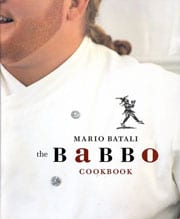 For the guinea hen

For the sweet corn fregula

I was unable to find fregula at two local grocery stores (Whole Foods and Safeway), so I substituted another soup pasta — orzo — which seemed to work fine. To adjust for the cooking times suggested on the orzo package, I decided to skip the first step of pre-cooking the pasta until tender. Instead, I simmered the orzo in chicken stock for 10 minutes total. After about two minutes of simmering the orzo, I added corn, cut from oven-roasted cobs. We do not have a grill, so I roasted the corn in the oven wrapped in tinfoil. At 10 minutes of simmering, I added the black pepper and grated Parmigiano-Reggiano cheese. After tasting the dish, I decided it didn’t need any additional kosher salt. The resulting dish was tender and creamy, but the orzo still had just enough firmness to create a pleasant texture. We really liked how the freshness of the corn added brightness to the creamy pasta. Served with the grilled guinea hen (or chicken) dish, the sweet corn and pasta tasted even more creamy. We would definitely make these two dishes again. I realize we adapted the recipes a bit to fit our kitchen constraints, but we were very happy with the results.

I couldn’t find fregula pasta in our markets. I had some Israeli couscous, but not enough for this recipe. Since I had some tiny star pasta, I decided to use that. My packet of pasta said to cook five to seven minutes, and since this recipe said to undercook the pasta a bit, I only cooked it for four minutes then proceeded with the recipe. I grilled my corn over charcoal. My tasters loved the charred corn with the creamy pasta, which was enhanced by the Parmesan. Hubby thought it needed a little something more, so he squeezed some lemon juice on his, which he said made it perfect. I served it with some tuna grilled on cedar planks.

I liked this treatment of pasta, especially as an accompaniment to the grilled chicken legs. I did find it a bit bland as a stand-alone dish, even though I grilled the corn. This is not an issue if serving with a robust protein like the chicken legs. I used pastina pasta and ended up using half the amount of the pasta that I had boiled. It seemed that it would be too much with the amount of corn I had to work with. This could be dependent on the type of pasta utilized. This recipe was simple to put together and a different way to incorporate delicious fresh corn into a side dish.

I’d never seen or heard of fregula before and was anxious to try this. It’s a lot like Israeli couscous in flavor and texture, although perhaps not quite so nutty. It was a great foil for the corn and Parmigiano-Reggiano combination.

Salt is not mentioned in the ingredients list and is almost the last thing this recipe talks about, but it’s really the requisite ingredient to make this dish really shine. I seasoned it to taste with some lightly smoked salt. That seemed to pull the grilled corn kernels more into the limelight and emphasize the fregula. I’m usually a little on the sparse side when salting, but this is not an occasion. It also wouldn’t hurt to use more Reggiano with the pasta. I grilled the corn, actually more like moving it a few rows on the grill every two minutes for a total of 10 minutes, to get a nice caramelized flavor happening with the kernels.

This recipe for sweet corn fregula has a short list of ingredients, but the combination of flavors is great. It would work as either a side dish or a main dish. Don’t tell Mario, but I didn’t spread my pasta out to dry, and the recipe worked just fine.

I have to admit that although I like to believe that I live where you can obtain anything, it becomes more clear each day that the typical supermarket just can’t meet all of my needs. I only had time to go to one store and they didn’t have fregula. I used a small pasta which was very close in size to fregula but lacked the toasted flavor. Regardless, I produced another winner in record time. Next time I think I will use more corn, as the ratio of corn to fregula wasn’t enough for me, but that’s about the only change I would make. Definitely grill the corn — the extra time and effort produces a great flavor that I think really makes the dish special. I definitely could have served six people, and we are very good eaters!

Two words: Mario Batali! I’ve cooked from The Babbo Cookbook before, always with positive results. And once again, no disappointment here with the corn fregula. I searched high and low for fregula but ended up using orzo, which isn’t quite as small. I’m sure this doesn’t matter too much, because this dish was still good. It’s simple to make, has loads of flavors from sweet in-season corn, and the savoriness of Parmesan cheese and homemade chicken stock. Cooks easily and comes together pretty quickly. I served mine with roasted, then braised, oxtail, slathering the entire dish in the reduced braising liquid. So hearty I’d love to freeze some of the summer’s bounty of sweet corn and make this during the cooler winter months. Can’t wait!

A lot of impact for such an easy side dish. Even better, a lot of the work can be done in advance to help with cleanup. I couldn’t find fregula, so I used a really high- quality orzo, which was perfect. Since there are only a few ingredients, use the best ones possible. I used my own homemade stock, which I think helps the flavor a bunch.

Excellent, came out delicious. I used whole chicken legs. I would like to try it with just chicken thighs and use white balsamic vinegar and, instead of honey, 1/8 cup of agave nectar.

This is a delicious and simple chicken dish. The most time-consuming step was deboning the chicken legs. I would prefer to use boneless thighs, which are still dark meat but don’t have all the tendons and other connective tissue to deal with. If you leave the chicken skin-side down on the hottest part of the grill for six to seven minutes, the sugars in the honey WILL burn, so use caution. I needed to adjust the temperature and turn more than once. The flavor of thyme is really heavy. It nearly overpowers the other flavors. When I make this again, I will use less thyme.

I used tiny soup pasta, conchigliette to be exact, which was much more readily available than fregula. I reduced the initial boiling time to three minutes so as not to overcook. The finished result was a simple, not strongly flavored pasta dish which I enjoyed and can see making an appearance as an easy meal or side dish in the future.

I called seven stores and couldn’t find guinea hen, so I used chicken legs. Loved the marinade with notes both sweet and acidic from the honey and balsamic vinegar. This was very easy to make and very flavorful.

Fregula wasn’t on any of my grocery stores’ shelves so I substituted Israeli couscous, cooking it according to the package directions for only seven minutes before spreading and drying it. That said, everything else worked just as written. The grilled corn added such a great smoky accent that I wouldn’t substitute any other cooking method. What I really like about this dish is its great accompaniment possibilities — I can imagine serving it with almost any chicken dish, roast pork, or roast vegetables.

This was actually really simple and quick to make. Since corn was just coming into season, it was perfect for right then. I couldn’t find the fregula pasta, so I substituted another very small pasta (Barilla pastina — little stars). I used the same amount of pasta and, initially, the same amount of liquid, but I found that I needed about 1/4 cup more liquid.