These maple-brined pork chops take their juiciness from a maple syrup-bay leaf-peppercorn brine. A pear chutney pairs beautifully with the chops. A conversation-stopping autumn dinner.

Adapted from Brigit Binns | The Cook and the Butcher | Weldon Owen, 2011

The trickiest aspect of this recipe for pork chops? Planning your craving. You’ll need to start prep work for the brine and the pork chops at least 6 hours in advance—and also plan to try to spend the subsequent hours doing something other than drifting into a reverie over the subtly sweet, ever so slightly peppery pork chops soon to be on your plate. Rest assured, the actual prep is a piece of cake, given that the brine is hands-on and the sweetly savory pear chutney–made from just four ingredients–comes together in minutes. Meanwhile, those thick-cut pork chops practically cook themselves. Good enough for guests although we doubt you’re going to want to share.–Renee Schettler Rossi

What is the purpose of brining pork chops?

Thin cuts of pork that cook relatively quickly, such as pork chops, tend to dry out quite easily due to the lean nature of the cut of meat. Brining pork chops infuses the pork with moisture as well as flavor. Although brining solutions are heavily salted, the resulting pork chops aren’t overly salty. And, in fact, they’re quite remarkably juicy. After just once, you may never again cook pork chops without first brining them. 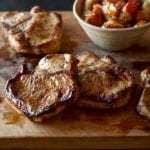 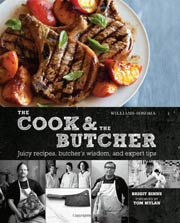 For the pear chutney

For the pork chops

For the pear chutney

I have found a brand new way to eat pork chops. I cannot recall the last time we ate chops that were were so tasty, juicy, tender, and oh-so-very amazing. Not one single person at the table had one bad comment to say.

The chutney was very good and certainly went very well with the chops, even though the chops certainly didn’t need it. The chutney had a sweetness to it, yet wasn’t overpowering.

Anyone loving pork chops will love this recipe! The brining was simple and took care of itself overnight. We couldn’t really taste the maple syrup, though the chops were so moist. Now I know why people brine meat!

The pear chutney was a delicious little chutney. I didn’t cook the chutney as long as called for in the recipe. The slight hint of the ginger with the sweet and savory chutney was wonderful. The cooking for the pork chops was exact. We had an Oregon pinot noir with the dish. The house smelled so good.

I’ll be serving this dish again and again!

This made for a lovely fall meal. The pork chop has a depth of flavor from the brine that goes together so well with the pear chutney.

The time for cooking the chops was spot-on. The chops were moist with a great texture. This is a great way to use those pears that are not so pretty. I could have eaten the pear chutney on toast (or just with a spoon). A real benefit of this recipe is you can prepare most of it ahead of time for a nice dinner to come home to.

An extremely easy recipe with just a few ingredients makes this a great recipe for beginners. The brining also keeps the pork very moist and tender, lessening the chance of drying out the meat by overcooking.

I would use less sugar in the pear chutney next time. To quote my son: “Yum, it tastes just like pie filling” — which was a bit too sweet for my personal tastes.

Having never brined pork chops before, I was ready to take the plunge. I found that not all of the salt would dissolve in the water, but everything else worked as written.

The chutney was easy to prepare and delicious. If I were using a sweeter pear, I would probably decrease the sugar by a little, since I prefer a tarter or hotter chutney, The only complaint I have is that the chops seemed a little salty for our tastes, and the maple flavor is a little subtle. I would certainly make this again, but I’d decrease the salt in the brine and add a little more maple syrup. Perhaps I might also decrease the sugar in the chutney by 1/3 cup and add 1/3 cup maple syrup to mirror the maple flavor of the chops.

You had me at pear chutney.

These pork chops are ah-mazing! So tender and juicy. The chutney is the perfect accompaniment. I used Morton’s Kosher salt so I decreased the amount by 1/2 to 1/3 cup. I would probably reduce it a bit more the next time I make it, but I won’t change anything else about the recipe.

The other great thing about this recipe is that it cured me of my fear of my cast iron skillet. Seriously. Deathly afraid. Put it in the darkest corner of the pots and pans cabinet. Never to see the light of day. Well, that’s one fear vanquished.