Turkey Cincinnati chili is a light variation on the classic Cincinnati chili that tops spaghetti with chili and cheese and onions and beans. Healthier, easier, and quicker than most. You’re welcome. 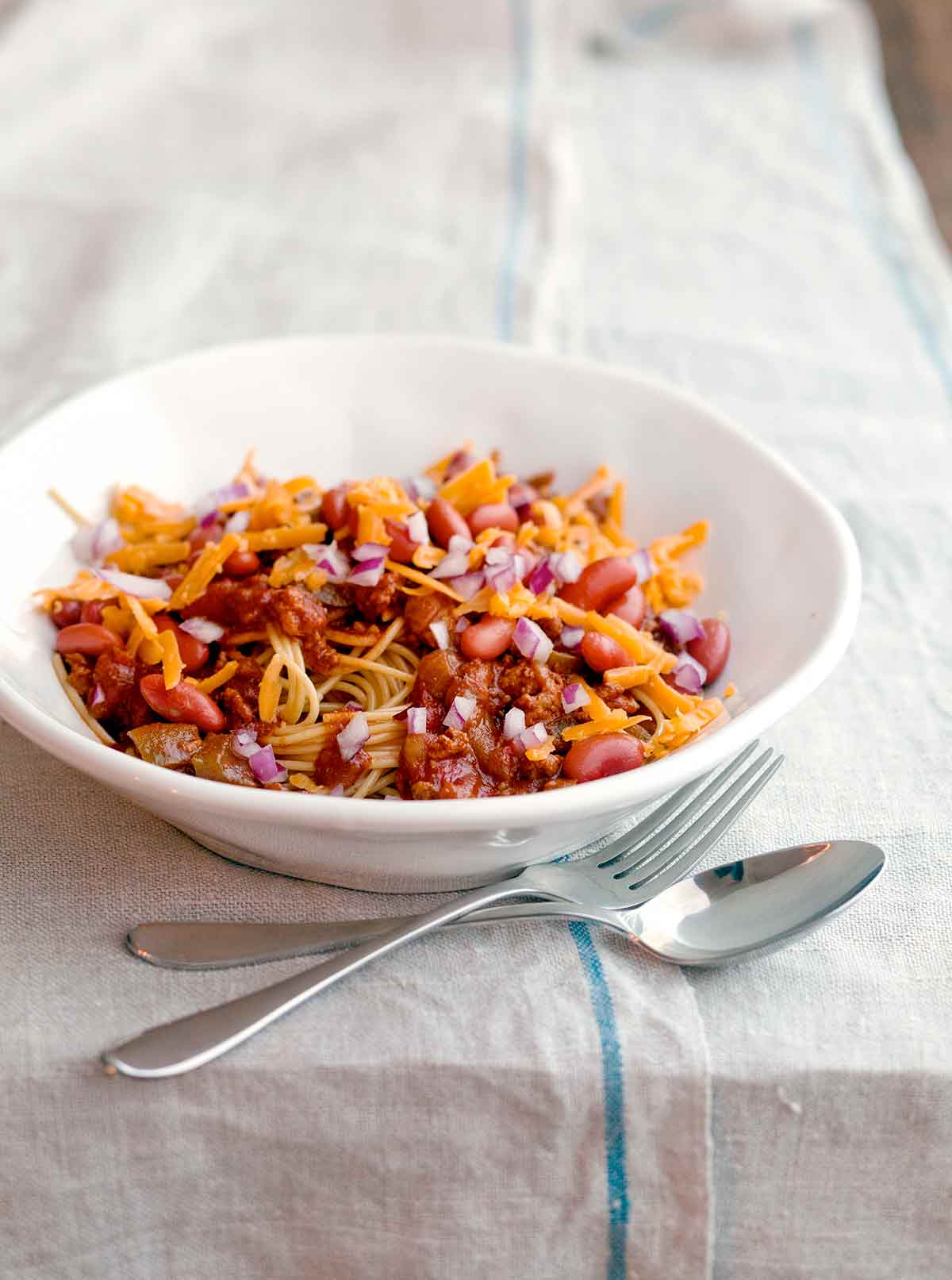 This turkey Cincinnati chili heats things up with heaping bowls of chili with additions such as warm spices like cinnamon, cocoa powder, allspice, and cloves, and a touch of sweet molasses. Served over spaghetti and topped with hearty beans, cheese, and onion, is like no chili you have had before, but definitely one you’ll make over and over again.–Ellie Krieger

How To Serve Cincinnati Chili

Are we all familiar with Cincinnati-style chili? This unique and saucy take on chili is traditionally and ubiquitously plopped atop spaghetti and, if you please, glopped with Cheddar cheese, red onions, and/or beans. Mind you, there’s proper Cincinnati chili terminology to describe exactly how you like yours…

Three Way: Chili plopped on spaghetti and smothered with cheese

Four Way: Chili plopped on spaghetti and smothered with cheese and diced red onions or beans

One last thing. This rendition is made with ground turkey, which is hardly traditional, although you can’t really tell the difference. Honestly. That said, we’re not going to try to stop you from making it with ground beef. As if we could stop you.

Heat the oil in a large Dutch oven or soup pot over medium-high heat. Add the chopped onion and cook, stirring, until softened, about 5 minutes. Add the garlic and cook for 30 seconds.

Add the turkey and cook, breaking it up with a wooden spoon into small pieces, until just cooked through and no longer pink, about 5 minutes.

Add the bell peppers and cook until they begin to soften, about 2 minutes. Add the chili powder, cocoa, paprika, cumin, oregano (if using), cinnamon, allspice, cayenne pepper, salt, black pepper, and cloves and cook, stirring, until fragrant, about 1 minute.

Add the tomato sauce, tomatoes with their juice, water, molasses, and bay leaf and bring to a boil. Reduce the heat to low and simmer gently, partially covered, until the mixture has thickened considerably but is still somewhat soupy, about 2 hours.

Remove and discard the bay leaf. Serve the chili over the spaghetti, topped with the kidney beans, cheese, and diced red onion. Originally published January 4, 2012.

This is a rich and meaty chili recipe, with a really deep flavor from all the spices. I gave it an extra half hour of cooking time and made it the day before, so by the time we came to eat it, it was deliciously thick. You might want to make your own decision on how much pasta, cheese and red onion you want to serve — once you have a forkful, you might realize that you want a bigger bowl!

I’ve never made a turkey chili with cocoa before, but I really enjoyed the warm notes it added to the flavor.

I did simmer the pot with the lid half on, just to keep the liquid from evaporating too quickly, which worked. With all the spices, I didn’t even miss the ground beef. thought the cumin came out a little strong, but all the other spices seemed to blend in just fine.

I enjoyed it over spaghetti, but also on its own, with a baguette, over salad, and mixed in with spaghetti squash. As with most chilis, the flavors deepened the next day, but it was delicious hot out of the pot.

Definitely a winner, and I am going to mix up a batch of the spices to keep in a jar so I don’t have to measure so much next time.

I was pleasantly surprised at the depth and richness of flavor produced by this recipe. I was wary of the ground turkey and by what seemed an excessive amount of green pepper, but the wide spectrum of spices, the cocoa powder, and the molasses produced a hearty and satisfying chili.

I included the oregano and the bay leaf, and also put the kidney beans into the chili, since I prefer my beans to be warmed. I served the chili over multigrain spaghetti and topped it with cheese and red onion—delicious! I also ate leftovers the following day without accompaniments and still loved it. This just might become my standard chili recipe since it is so healthy and tasty.

I am a dietitian with utmost respect for Ellie Krieger and her recipes. This is a perfect example of reduced fat combined with tons of flavor. I knew that turkey Cincinnati chili would be different from the varieties that I usually make, but I thought that this healthy dish was worth a try. Glad I did. The flavors came together in a delicious way, though it’s important to note that the flavors are not at all like Texas chili.

I followed the recipe as written and included all of the spices, even the ones that I am not usually a fan of, like allspice and cloves. It was perfect. Served it on whole wheat spaghetti and used all of the toppings as directed. I used reduced-sodium tomatoes and found that the chili was perfectly seasoned. I am thinking about visiting Cincinnati just to do some chili research!

This smells just like the Cincinnati chili I’ve made for years. I think the version I make is pretty authentic—it’s just like the one served at a local restaurant that specializes in it. This version is flavorful, slightly spicy, and a little thicker than I’d like.

I’d prefer broth in place of water, and more of it. Also, I think the beans should just be added to the chili—otherwise, it’s an extra step to heat them before adding them to the pile of pasta.