Choucroute garnie—a pot filled with smoked pork butt, bacon, sausage, potatoes, sauerkraut, and spices—is French comfort food. And it can be made in a slow cooker.

What’s choucroute garnie? It’s a hearty French classic, also known as choucroute Alsacienne, which is a staple at every brasserie in France east of the Lorraine, according to the author of this superbly satisfying recipe. And it’s surprisingly simple to make—even slow cooker friendly. Place the pot in the center of the table and set out some brown mustard, some rye bread, and cold beer or white wine. Your winter weekend just got a heck of a lot more satiating.–Renee Schettler 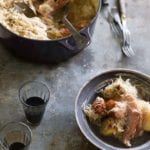 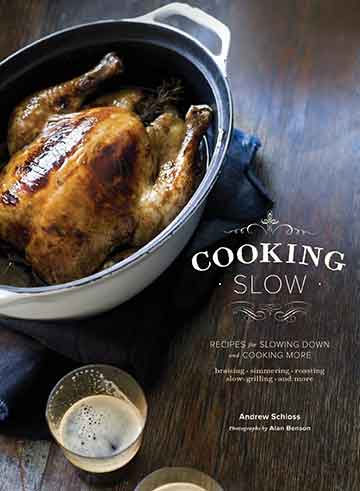 Cook the bacon in a large skillet and then cook the potatoes and onion in the bacon drippings, as directed. Then layer everything in a 6-quart slow cooker instead of in a pot, beginning with the potatoes and onions followed by layers of sauerkraut and bacon and spices, and finally the pork and beer. Cook on low for 4 to 8 hours.

There’s not much I would change in this choucroute garnie recipe. I cooked it in the oven at 250°F for 4 hours. It was definitely ready at this point. There was a lovely, rich broth in the pot that released a beautiful aroma of blended spices. All the meat was tender and well-cooked. I did start my oven at 200°F, but since I had to get the meal on the table by dinnertime, I cranked the oven up after the first half hour. In addition to the smoked pork butt, I used veal and chicken knockwurst and some very nice Niman Ranch beef bratwurst. As the author points out, the selection of meats can be varied based on what’s available in the market. I believe 4 hours braising time is all that’s needed for this recipe. I don’t think the flavors would be that more developed with 4 more hours cooking.

What great comfort food this choucroute garnie is! When I saw this recipe I immediately knew I had to make it. It was all I could think about for the 5 days before I had time to pick up the ingredients and make it. I’ve never tried anything like this before, so I was more than happy to hop on and go for a ride on the culinary train to the Alsace region of France. I started my journey by heading to an authentic German deli, which was a first for me and an adventure in itself. I picked up some sauerkraut, bratwurst, knockwurst, smoked pork butt, and authentic German mustard. A slow cooker worked great for my first attempt at this recipe. What a meal to come home to! Within 4 1/2 hours on low, all the ingredients were heated through. My suggestion is to place just over the half the potatoes in the bottom of the slow cooker so the potatoes can slowly cook in the liquid from the sauerkraut. (The potatoes cook better at the bottom rather than the top of the Crock Pot.) I quickly browned the sausages in the same pot I browned the potatoes and onions to give them a nice outside texture and appearance, and it only took 5 to 10 more minutes, tops. I served it with a nice mustard—Alstertor Dusseldorf Style Mustard (in a glass beer mug-style jar). It was creamy, tangy, and paired perfectly with the meal. I used a pair of kitchen shears to cut the bacon into lardons so that I didn’t have to crumble it later. It was an incredibly comforting and delicious meal which my family enjoyed just as much as I did. And yes, this recipe did, indeed, transport us to France for the evening. Without any nudging on my part, we reminisced about our travels to France at the table.

We really enjoyed this choucroute garnie. I was a little worried about the spices since we don’t usually enjoy cloves and coriander in savory dishes, but they and the bay leaves, juniper berries, pepper, and garlic were great with all the other flavors in this dish, including the lager. I couldn’t find knockwurst in my grocery store so I used 5 bratwurst and 3 smoked chipotle Cheddar sausages. For some reason when I printed this recipe, I didn’t see the boneless smoked pork butt ingredient, so it got left out. The dish was great even without it, but I’m sure it would’ve been even better with it. Since this dish has almost everything you need to round out a meal, we ate ours as is with the suggested rye bread and brown mustard. (I used spicy brown mustard and Jewish rye bread.) The suggested 4 hours cooked everything to the perfect doneness and mixed up the flavors nicely. The kraut was still a bit crunchy, the potatoes tender, and the sausages perfectly cooked. The dish reheats nicely if you have leftovers as we did.

When prepped beforehand, this choucroute garnie recipe produces an easy slow-cooker meal. Not only can the choucroute be served as a casserole-type dinner for a multitude of guests, but the leftovers are equally delicious rewarmed or spooned into rolls as a sandwich with lots of mustard. The flavor is warming and there’s plenty of meat and potatoes to please everyone. My choucroute cooked on low in the slow cooker for about 9 hours. The sausage was cooked through but not burnt on the edges like some overcooked slow-cooker meats can become. Both the pork and sausage emerged fork-tender with great flavor. Plan on at least 30 minutes to prep all your ingredients before layering them in the Crock-Pot.

This choucroute garnie recipe is very close to a dish from Germany that my husband considers the ultimate in comfort food (Eisbein). I chose to use a slow cooker to make this. Three pounds sauerkraut equals two 1-liter jars commercial sauerkraut. I would recommend if using commercial brands to look for ones that are made with wine, as they tend to have a mellower taste. We allowed it to cook for 6 hours before we sampled it. It required another couple hours to really mature, as the sauerkraut was still a little sharp in taste. After another couple of hours the smoked pork essence had permeated the kraut and had made it mellow and slightly smoky. The smoked sausages were delicious, and the smoked pork was fabulous. The sauerkraut complemented the meat without being overpowering. As for the knockwurst, I found them to be bland and lost in the other flavors. My husband disagreed and liked them best. I really liked the spice and garlic mix and found the addition of the juniper berries added something nice to the overall flavor, so I’ll keep using that in future. If smoked pork is difficult to find, I’d substitute a couple of smoked turkey thighs, which I’ve done in the past with similar dishes. Also I’d switch out the knockwurst for a heartier sausage, perhaps debreziner or a smoked bockwurst, something that will stand up to the long cooking period. If using knockwurst, I’d add them only for the last couple of hours so they don’t overcook. I would also use a homemade sauerkraut, as I find the taste to be mellower, and it would need less cooking to achieve the same taste that the longer cooking achieved this time.

Having attended the French school system most of my school years, choucroute garnie was a staple. Just about every region has its own “boiled dinner” version, and this one is Alsace’s, with a little French influence and a little German influence, hearty meal for colder weather. I had never made it in a slow cooker, so was curious as how it would come out. In the ingredients it just states 4 bacon strips—make sure to buy those nice thick ones straight from the butcher. I used those skinny thin strips from the package, and there was not enough fat to sauté the potatoes and onions in. Thankfully I always keep every dripping of bacon fat, so I added 2 more tablespoons to have enough to fry the potatoes and onions. The recipe also asks for ground coriander and cloves, but I was in such a hurry I just tossed them in whole, which I don’t think influenced the final taste whatsoever. The last thing about the ingredients is the 12-ounce bottle of lager. Since I was cooking this in a Crock-Pot, I decided to only use half of it, otherwise it would have been way too much liquid. Sure enough, the end result had just the right amount of juices. The timing for the Crock-Pot ended up being exactly 6 1/2 hours, though perhaps it could have been less, as I am one of those people that does not know how to keep away from it, and as such I constantly uncover it and check how everything is looking. The final taste reminded me very much of childhood, though it felt more fatty. I would certainly remake it this way, but first roast or sauté all the meats and discard all drippings prior to putting them in the Crock-Pot. That most likely would also reduce its final cooking time. I decided to serve it with plain white rice to absorb the juices.

Catalogue this choucroute garnie recipe under “Easy Comfort Food”! What better way to spend a Sunday than basking in the savory aroma of cloves, sauerkraut, and beer? I’ve made choucroute before and found this recipe to be a very simple affair. It has relatively few steps and the generous range of cooking times ensures you’ll have a hot meal ready to go when you need it. I’m not sure it’s possible to overcook it as long as you keep the lid on to retain the jus. I chose to use chicken bratwurst for the sausage, and its delicate texture and mild flavor really played well for my young family. I wasn’t sure whether to precook the sausage, but I can confirm that 4 hours cooking time was enough time to fully warm the brats (I confirmed this with a meat thermometer). The only caveat I have is that the sausages didn’t brown, so the appearance wasn’t exactly mouthwatering. I may try lightly browning them in the bacon fat before proceeding to the assembly phase the next time I make this. I used a smoked cottage ham cut into 1/2-inch-thick slices, but I suspect boneless smoked pork chops would be a good substitute. Finally, the addition of potatoes was new for me, and I really liked the balance it provided to the other strong flavors.