If you’re feeling a bit devil-may-care, you can substitute any stone fruit, such as halved cherries or diced apricots, plums, or peaches, for the blueberries. If you’re feeling lush, you can substitute 2 tablespoons triple sec or other orange-flavored liqueur for 2 tablespoons of the milk. And if you don’t have half-and-half on hand, you can replicate it in this recipe by adding 1 tablespoon melted butter to a scant cup whole milk. Similarly, you can replicate heavy cream by combining 3/4 cup melted butter with 1 cup whole milk. (While the cream substitution works well for baking, it won’t work to make whipped cream.) 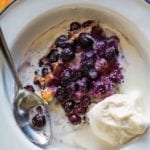 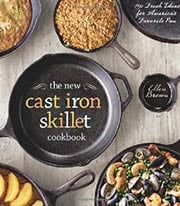 My total baking time was 35 minutes; the clafouti was still very wet in the center even after 25 minutes. I loved the appearance of this dessert—the blueberries float to the top of this pancake/crepe/custard concoction, and it’s so pretty when it’s cut and served on a fancy dessert plate. I served it with a small scoop of vanilla ice cream, which I wouldn’t think to do normally, but with the warm custard, the ice cream gave it a chilled creaminess that is always a welcome addition. In terms of servings, this made 8 good-size dessert portions.

The clafouti is on the sweet side, so we didn’t think it needed ice cream, but a drizzle of half-and-half was nice on top. For our next version, we may cut back on the sugar a bit, and add orange or lemon zest. We definitely will make this tasty clafouti again. Be sure to butter the cast iron skillet well.

The smell and flavor of the finished blueberry clafouti were great. I love pancakes. The only problem I had was this was too large a quantity for my immediate family, so I’d cut it in half next time.

I served it with a small dollop of whipped cream rather than ice cream. One caution is to not serve the recipe immediately. I did so, and it was far too hot to eat. The blueberries were still fairly molten. I would let it cool just a little next time.

I think the blueberry clafouti should be a TC recipe because it’s delicious. But more importantly, it’s very easy to make. The hands-on time is 10 minutes, the total time is 35 minutes, and the only equipment you need is a blender and a cast-iron skillet.

I made the batter 1 hour before I planned to bake the dessert. I just kept the blender container (with the lid on) in the fridge. I used the lower baking time of 20 minutes. The description of springy to the touch is accurate. I broiled the top for about 2 minutes.

Easy to make and an almost perfect example of clafouti or “pudding.” Good blueberries are just coming into the markets where I live, and this is a great way to use them. They work great, too, because they’re not too mushy or wet, a good substitute to the more traditional cherry.

If you have an immersion blender, that works great in place of the food processor and is much easier to clean. I blended the batter directly in a pitcher and put the pitcher in the fridge until I was ready to bake it. It took about 27 minutes in the oven for the batter to set, puff, and get springy. This recipe serves 8 people comfortably. Instead of making ice cream, I prepared a crème anglaise sauce flavored with a bit of almond extract. The cold sauce worked perfectly with the warm clafouti.

Clafouti is such a simple way to make a quick and seasonal dessert, showing off the best of the moment in fruit. Blueberries are a crowd-pleaser since the tart-sweet berries take on a jammy spiciness when cooked, and clafouti is a really simple way to showcase that.

This works for a dessert, as well as for a weekend brunch. Making this in my largest cast iron skillet was similar to how I would do a Dutch baby, and although my skillet was a little undersized, the baking worked fine. I’d recommend being generous when buttering the skillet and take care to get the sides well-coated so that when the edges start to rise, they won’t stick.

The extra broiling with butter and sugar at the end was something I had not done with clafouti before, and it does make for a pretty presentation, especially for a dinner party. I love that this batter comes together so quickly and could be prepared ahead of time and put in the over while you’re having dinner. If you have leftovers, it keeps nicely for a breakfast treat the next day (although the blueberries do some color changing and look odd where they touch the batter, but that didn’t stop us form having it with yogurt the next morning).

This recipe lends itself to many variations. It’s a handy one to keep around for fruit that may be in season that you could swap out for the blueberries. Cherries, all kinds of stone fruit, and other berries come to mind. This yielded a really large clafouti, at least for us. We would get 8 to 10 servings out of this.