This maple bacon is an easy breakfast or nosh made with bacon, brown sugar, beer, and cayenne pepper. It’s sweet and salty and welcome any time of the day. 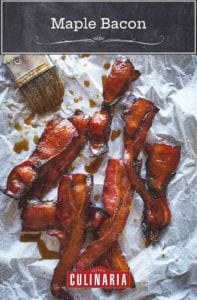 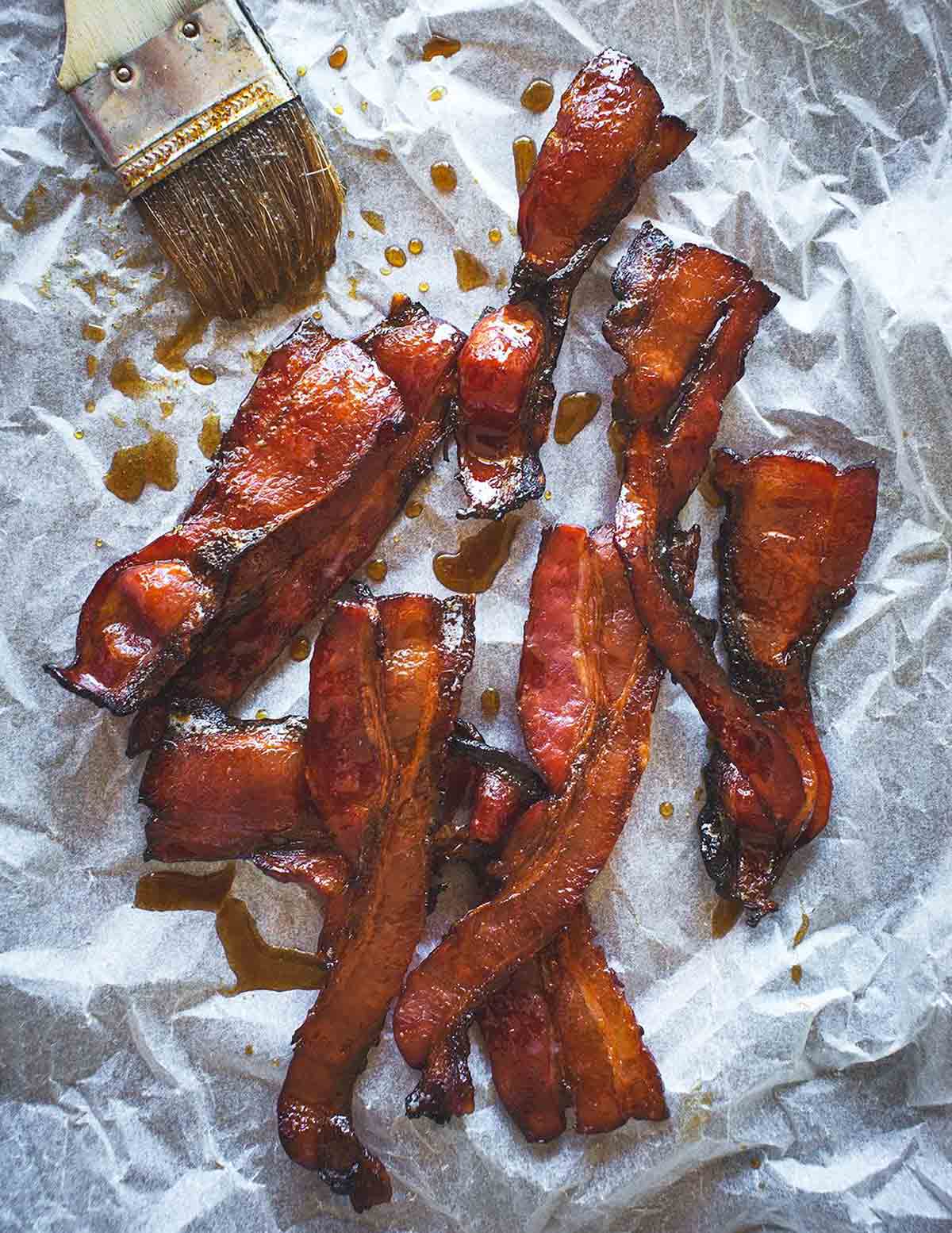 This maple bacon is, as the author asserts, truly something special when demolished alongside beer as a football or back We’re just saying, in the spirit of disclosure, that it’s more than that. It’s a weekend splurge alongside a cup of black coffee. It’s a mid-afternoon nosh that inspires and sustains. It’s a midnight nosh of the highest order. It’s, well, let’s just say it’s as close to porcine perfection as we can conceive. Which means the only thing saving you from inhaling the entire batch standing at the stove is divine intervention. Let us know how that goes.–Renee Schettler 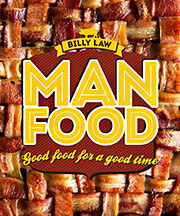 Preheat the oven to 390°F (200ºC). Line a rimmed baking sheet with foil and then place a wire rack on the sheet.
In a bowl, stir together the sugar, syrup, beer, and cayenne pepper until the sugar has completely dissolved and you have a thick syrup.
Place the bacon on the wire rack and brush it with the syrup, flipping the slices to coat both sides. Bake for 10 minutes.
Brush the bacon again with the syrup, once again flipping the slices to coat both sides. Pop the bacon back in the oven and cook for 10 minutes more.
Repeat the brushing and flipping and baking a couple more times, until the bacon is crisp and browned to your liking, roughly 30 to 40 minutes total. (Allow some wiggle room depending on how thick your slices and how crisp you like your bacon. Bear in mind, the maple bacon will become crisper as it cools, so don’t wait for it to be crisped to your liking before you remove it from the oven. We recommend baking it for no more than 40 minutes.]
Remove the maple bacon from the oven and let it cool as long as you can on the rack. We think you can take it from here. Originally published September 19, 2015.
Print Recipe

This maple bacon recipe is soooo good. It comes out sort of like the texture of beef jerky but with a bacon flavor. There is no way you can eat only 1 piece. You want more and more.

Because I really wanted to have the caramel color, I used dark brown sugar. And I used Blue Moon beer. My finished bacon looked like the picture—it had the same coppery color and shiny glaze. Any more than the 4 rounds of basting with the glaze will make the bacon too hard. I found that 40 minutes was just long enough.

I will be running back to the store to pick up another pack of bacon to make it again this week!

If you're looking to do something special for your family or guests one morning, plan your meal around this recipe. It takes bacon to a new level, which let's face it, is pretty hard because you're starting with BACON.

I used Grade B maple syrup, Guinness, and dark brown sugar. I added about 3/4 teaspoon cayenne because my son and I like things spicy. My one recommendation would be this: If you typically like your bacon burnt or crisp, try this a little less done. Take it out of the oven when it still has some wobble and let it cool. And remember, this is candied bacon, so if it cools too long on the rack or paper towels it will get stuck there!

This maple bacon recipe was very good and very versatile. I used it on an oyster po' boy sandwich and in a scallop and pasta dish.