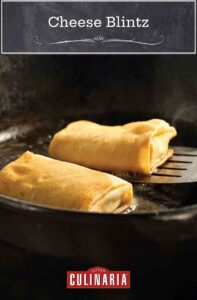 These cheese blintzes combine a sweet cheese filling with a pan-fried crepe, making them a terrific dessert but an even better breakfast. Just sweet enough, with a touch of vanilla, they’re filling and oh-so satisfying.

There are a lot of people with very strong feelings regarding the best cheese blintz recipe. We’re not going to tell you this blintz recipe is better than your Bubbe’s. We’re just saying this recipe turns out a damn fine cheese blintz. The secret—one of them, anyways—is that the filling contains farmer cheese rather than ricotta or cottage cheese. As for the other secrets, you’ll just have to try these and see.—Renee Schettler

How do I make clarified butter?

Clarified butter has had the milk solids removed, making it less likely to burn. To make clarified butter, melt 2 sticks of butter in a saucepan over low heat. Remove the pan from the heat and let stand for 2 minutes. Skim and discard any foam from the surface. Pour the clear, oily-looking butter into a container (this is the part you want to keep), and discard the milky residue from the bottom.

Can I freeze cheese blintzes?

Due to their texture, they can be made ahead of time and frozen before use. Just complete all of the steps up through filling them, but make sure to skip frying. When you’re ready to enjoy them, fry them in butter while still frozen.

Is there a substitute for Farmer’s cheese?

We caution you to not use just any cheese in this recipe—you won’t get the intended results. If you can’t find any, you can try making your own—it’s pretty easy to do. Otherwise, the only thing that would be acceptable is dry-curd ricotta. 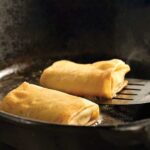 A sweet, creamy cheese filling gets wrapped inside a soft, crepey pancake (bletlach), before being fried in clarified butter. There's nothing like it for a filling and satisfying breakfast.
Prep 2 hrs
Cook 15 mins
Total 2 hrs 15 mins
Breakfast
Jewish
24 servings
110 kcal
5 from 1 vote
Print Recipe 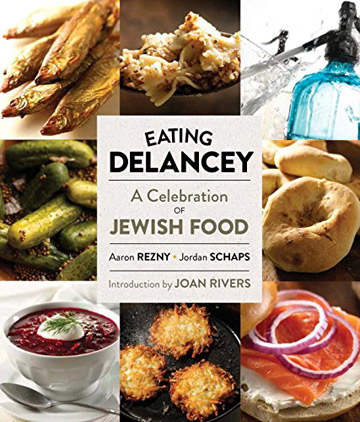 For the cheese filling

This cheese blintz recipe is definitely a winner! Although blintzes are time-consuming to make, they’re definitely worth it. If you’re short on time you can always make the bletlach (pancakes) one day, refrigerate them, and then make the blintzes the following day. I’ve also made the bletlach and frozen them, layered them with sheets of waxed paper between the pancakes, and then defrosted them when ready to make the blintzes. And I have also made blintzes to the point of assembling them and then freezing them raw and then defrosting and cooking them. Whichever way you do it, you’ll be happy you made them and wish you had made more.

If you’ve never made crepes before, the first few can be somewhat frustrating, and probably the first 1 to 3 will be throwaways, but once you get into the rhythm of it you’ll be amazed at how simple it is. Using a Teflon-coated pan can make a big difference, also. I started my pan on medium-high heat but then turned it down to medium-low and each one took about 3 minutes.

The same thing applies to rolling the blintzes—once you get the hang of it, it goes very quickly. The filling was excellent. I took the author’s suggestion and mixed half a cup of raisins with 3 tablespoons cinnamon and added it to the filling. As a well-known TV personality would say, yummo! My frying pan held 4 blintzes at a time, which were cooked on medium-low heat for about 4 minutes each. (By the way, my stove is gas so it’s difficult to tell the exact heat but everything was done at approximate medium heat).

I served them with plain sour cream. I did not use clarified butter; instead, I used regular unsalted butter. It’s important that there are no lumps in the batter. Some suggest straining the batter if there are lumps. Also, the batter for the bletlach works better if you refrigerate it for about half an hour before using it. I’ve also made them using a filling of ground beef and sautéed onions, which my family calls “melintzes.”

These cheese blintzes were very easy to assemble and made a delicious dish. The heat was always medium and I buttered the pan after each pancake. I used a 9-inch pan and had a dozen pancakes.