This vegan miso soup is so lovely no one will ever notice the difference between it and classic Japanese miso soup made with dashi.

This vegan miso soup recipe casts Japanese tradition aside by not relying on dashi as its base. (Dashi is a seaweed broth enriched with bonito, which is a form of dried, fermented tuna with a stench that’s exactly like you would expect but a taste that’s fairly mild.) Instead this miso soup draws its subtle flavors from gently sautéed ginger, garlic, and scallions. It’s so lovely, we dare say no one will notice the difference.–Renee Schettler Rossi

“If you’ve never had soup for breakfast, you should try treating yourself with a bowl of hot miso soup.” says author Dunja Gulin. It’s true. Miso soup—or, in this case, vegan miso soup—is traditionally served in Japan first thing in the morning along with rice and pickled vegetables. Next time you’re bored with cold cereal, consider miso soup. Of course, this recipe is also lovely for supper. Feel free to add some soba or udon noodles for substance. 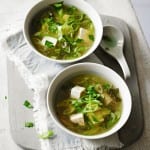 This vegan miso soup is so lovely no one will ever notice the difference between it and classic Japanese miso soup made with dashi.
Dunja Gulin
Prep 35 mins
Cook 10 mins
Total 45 mins
Mains
Japanese
2 servings
227 kcal
4 from 1 vote
Print Recipe 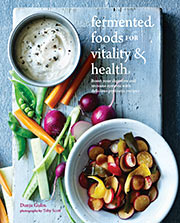 *What Kind Of Miso To Use In Soup

There are numerous types of miso in supermarkets and any of them can be stirred into miso soup. If you’re new to miso, keep in mind that the darker the color, the more intense the taste. Hatcho (soy) miso is of high quality but has a strong taste. Try 1/2 tablespoon soy miso with 1/2 tablespoon barley miso to get all the benefits of both kinds of soy paste. In warmer weather, you may want to substitute darker miso pastes with the milder sweet white miso.

[Melissa Maedgen] Miso soup is good for what ails you. And it’s also just plain good, even when nothing ails you at all! This version is not your Japanese grandmother’s miso soup—it breaks with tradition in many ways but is delicious nonetheless.

Miso soup usually starts with a stock called dashi—a simple and quick affair made from kombu and bonito flakes, or sometimes for a vegetarian version, kombu alone, or kombu and mushrooms. This version eliminates the dashi altogether, and instead begins with a sauté of ginger, scallion, and garlic. Both the ingredients (ginger and garlic) and technique are unusual for a miso soup, but I suspect the author included them for their healing properties. Plus, they do taste good! The oil for this sauté is sesame oil, and I’d like to advise caution here. You do not want to use toasted sesame oil in this quantity, as it would completely overpower the dish. I think the author used a non-toasted, blander sesame oil, and you could use any neutral oil. If you want to add a small amount of toasted sesame oil, as I did, keep it to 1/2 teaspoon or less.

Despite the lack of a dashi, this recipe does not forgo sea vegetables altogether, instead calling for wakame to be soaked, chopped, and added. My wakame came in large flakes rather than a single strip, so I had to estimate the amount to use. 2 tablespoons dried wakame seemed to be a nice amount to my taste, but if you’re wary of sea vegetables, you might prefer half that. After soaking, the pieces were large enough that I still chopped them as directed in the recipe.

The author does not specify what type of tofu to use, but a silken tofu would be appropriate here, so that’s what I used. I diced into roughly 1/2-inch cubes, which were a bit smaller than shown in the photo. The amount of miso called for is less than I usually use. I used a stronger-flavored, dark, brown-rice miso and used the larger amount specified in the recipe.

The soup is finished with lemon (unusual) and garnished with scallion (typical) and parsley (highly unusual). The lemon gave the soup a brighter, tart, flavor, instead of the usual salty, umami focus of most miso soups. And the parsley brought some ephemeral quality to the soup that made me feel like there were clams involved, which was not a bad sensation at all. It’s very, very different from other miso soups I’ve made or eaten, but it’s also quite delicious. Don’t wait until you have a cold to try it!

Gluten-free note: If you must avoid gluten, as I must, be careful buying your miso. The koji used to make miso can be cultured on barley (a gluten-containing grain), or rice. Also some types of miso contain barley along with the soybeans. Miso Master out of Asheville, NC and South River Miso out of Conway, MA both make traditional, high-quality miso, some of which are gluten-free. Both companies specify on their websites which varieties are GF. Miso Master’s GF varieties are NSF-certified gluten-free, which means they undergo independent testing and inspection. I used their brown rice miso for my soup.

Notes: Served 2. Hands-on time was about 30 minutes. Total time was about 45 minutes (including wakame-soaking time). This recipe calls for you to reserve the wakame-soaking water but never tells you what to do with it. I used some of it to thin my miso before adding to the soup. The lack of bonito flakes is the least of the ways this deviates from a traditional miso soup, which is often made without bonito in monastery cooking. I didn’t miss the bonito, and the sautéed ginger and garlic, lemon juice finish, and parsley all conspired to make this taste completely unlike a normal miso soup, and a lot “busier” in flavor. The question is whether that is a problem or not. For me, it wasn’t.

This is a simple and great miso soup recipe that can be thrown together in under 30 minutes and is a suitable substitute to the traditional version. This recipe doesn’t have the original broth made with kombu seaweed and bonito flakes but still delivers in flavor and adds a light zing with the addition of lemon juice. I personally wanted a little more umami flavor, so I added a splash of soy sauce.

– I don’t think the recipe needed parsley or cilantro.

– I cooked the garlic/ginger mixture for 2 minutes further. That’s when the garlic started to get soft and before the green onions began breaking down.

A great winter soother, and vegan as well! This is a decidedly better version of miso soup than any instant or pre-made version you might have lurking in your desk drawer as emergency food at the office, and honestly it was much more subtle and satisfying than most miso soup courses that I have had as part of a bento box lunch or dinner out. That said, just know that for the reward of a delicate and soothing soup, you have a bit of prep to plan into your morning, though you could easily organize everything the night before. Start to finish, you need about 45 minutes, give or take, most of that time hands-on, which means if you do wish to serve it with rice, you have time for that to be done in parallel—my electric rice cooker would happily deliver it in time.

The reward comes in total control over the miso flavor, the type of miso, and the saltiness. Freshly prepared ginger, garlic, scallions and nice tofu are probably staples in most refrigerators, and the wakame lives in the pantry. My various packages of wakame all happened to be already sliced and looked like little dried threads, so I assembled a 3” square single layer, and that was about right for 2 servings. Sautéing worked perfectly in a 9.5” skillet, and it had enough room for the entire soup. I heated the pan on medium heat, adding un-toasted sesame oil, and stopped short of any browning of the scallions or garlic and ginger, so no more than 2-3 minutes tops. I added the wakame water with the other liquid and ingredients.

I can’t speak to how this fresh-in-pan dashi compares to a traditional bonito-based one since the dashi that I make at home is always vegan, using a combination of wakame, kombu, dry mushrooms, and sake. I liked this version a lot, and the fresh ginger and garlic added enough complexity for my preferences. This yielded a very clean-tasting broth, and it was very comforting on a cold morning.