This steak and quinoa salad recipe is spectacularly easy to toss together, especially if you have some leftover steak and maybe even quinoa in the fridge. But it can also be tossed together with spectacular ease even when you start from scratch. Here’s how to make it.

How To Keep Your Salad Low In Sugar

The author savvily suggests you opt for a whole-grain mustard that isn’t honey-sweetened for this steak and quinoa salad as it ensures you can better adjust the sweetness of the vinaigrette when you whisk it up. 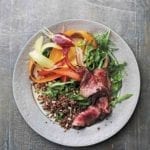 This steak and quinoa salad recipe is spectacularly easy to toss together, especially if you have some leftover steak and maybe even quinoa in the fridge. But it can also be tossed together with spectacular ease even when you start from scratch. Here’s how to make it.
Sara Dickerman
Prep 30 mins
Cook 30 mins
Total 1 hr
Mains
American
4 servings
5 from 1 vote
Print Recipe 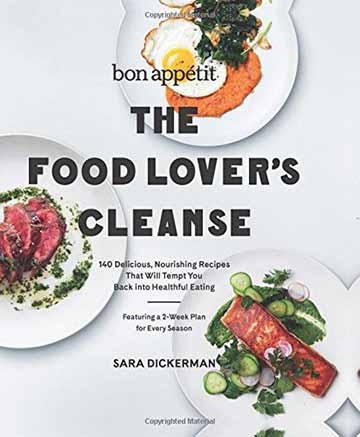 For the steak and quinoa salad

Make the steak and quinoa salad

Note to self: The next time you make steak, perhaps every time you make steak, make extra. I had some leftovers from a T-bone that my husband had grilled. I also happened to have some leftover quinoa. I sliced the steak and arrange it on a plate with the quinoa. I then shaved multi-colored carrots (orange, white, and purple) alongside that until it looked like enough. I toasted sunflower seeds and sprinkled them over the top, again enough until it was “just right.” What a wonderful lunch this turned out to be!

This quinoa salad is a great weeknight recipe that would be stunning for a casual dinner party. We made this for just the two of us and it’s a nice meal to cook as a team. I would absolutely serve this to guests with the salad arranged on a long platter to be taken to the table.

We made a half recipe of everything except the quinoa (extra quinoa can always gets incorporated into other meals here). In the time it took to season the flank steak and let it come to room temperature, I could prepare the quinoa, salad, and dressing.

For extra drama, I used dark red rainbow carrots, peeled into long ribbons. I had fresh pepitas (pumpkin seeds) in place of sunflower seeds and pan-toasted them for a few minutes in the same cast-iron skillet we later used for the steak. Just 3 minutes on the first side and 2 on the second yielded a perfect rare steak. Initially I arranged the salad ingredients to match the picture, but the carrots ribbons seemed to want to overflow the plate, so I tossed the salad (but not the dressing) and replated, then drizzled with the vinaigrette. After adding the sliced steak on top, I drizzled a little more dressing.

The only thing I would change is to make the dressing a bit brighter. I used white wine vinegar and the ratio was just a bit too mild—it needed more acid. I adjusted the dressing the next day with some red vinegar and it popped nicely. My usually ratio is more 5:2 (oil to acid) and this was more of a 4:1. Just a matter of taste.

The other thing I would consider would be adding a little chopped preserved lemon if I had it on hand or some pomegranate seeds.

This was a very generous and satisfying dinner for 2 or 4 or 6…a very scalable recipe! Not only were we willing to eat this again, we probably should eat like this more often.

This quinoa salad recipe is a good combination of flavors. It’s also a lovely steak dish that’s satisfying and filling yet light. The title calls it a salad but it’s really much more than that but will not weigh you down.

I like to salt my steak before cooking it for about an hour or so. I think it makes for a better seasoned steak and helps it brown much better. The recipe instructs us to salt it for 30 minutes before cooking and that was perfect for a thin cut like flank. I like that the recipe specifies a temperature to cook the steak to as opposed to the silly “thumb test” or something like that. My steak took closer to 10 minutes total to hit 135°F (57°C).

Half the vinaigrette recipe is just right for the amount of “salad.” To serve, I used the picture as a guideline and made a nice composed salad. To ensure a good distribution of sauce to ingredients, I first tossed the greens with a bit of vinaigrette. I did the same for the carrots. Then I drizzled some of the remaining vinaigrette on the steak and quinoa.

This colorful main dish salad lends itself to being made in stages and then combined closer to mealtime. I cooked the quinoa early in the day and refrigerated it. While the quinoa was cooking, I made the mustard vinaigrette and also stashed that in the fridge. Ditto for preparing the carrot ribbons, which were stored in a container of water to keep them from drying out. About an hour before we ate, I took my steak out of the refrigerator to season it and then washed and dried the arugula while the steak came to room temperature. After cooking the steak, all that was left was pulling everything together into a salad.

Since there were only two of us, I plated 2 portions and dressed them individually. For the dressing, I used walnut oil, white wine vinegar, and honey. The arugula was a young variety (not quite baby but not fully mature and bitter) from the farmers’ market. The carrots were the most laborious part of the recipe. I peeled them into ribbons as close to the core as I could and still get long intact pieces.