Kimchi tacos. Believe it. They’re simply bulgogi tacos (that is, Korean-style beef tacos made with short ribs) smothered with kimchi and Korean taco sauce. And they taste just like something you’d get from the most incredible taco truck ever. Includes a vegetarian kimchi taco variation.

Kimchi tacos. Yep. You heard right. Taco night will never be the same after you’ve noshed on these spicy, saucy, fusion cuisine tacos. Tender beef short ribs are marinated bulgogi-style, grilled to perfection, tucked into corn tortillas, and smothered with kimchi as well as a spicy Korean taco sauce along with all your fave taco fixings. Almost as incredible as the taste of these Korean beef tacos is the fact that it’s incredibly easy to prep all the components in advance, so when hunger (or guests) strike, everything is ready and waiting. All you have to do is grill the meat at the last moment, let folks assemble their tacos, and accept accolades. Need we say more?–Angie Zoobkoff

HOW TO BUY SHORT RIBS FOR THESE KIMCHI TACOS 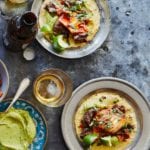 Kimchi tacos. Believe it. They’re simply bulgogi tacos (that is, Korean-style beef tacos made with short ribs) smothered with kimchi and Korean taco sauce. And they taste just like something you’d get from the most incredible taco truck ever. Includes a vegetarian kimchi taco variation.
Danielle Chang
Prep 30 mins
Cook 1 d
Total 1 d 30 mins
Entrees
Korean
3 to 4 servings
5 from 1 vote
Print Recipe

For the bulgogi (marinated short ribs)

For the Korean taco sauce

For the kimchi tacos assembly

Let the superlatives begin! These kimchi tacos are fabulous—all of the components of the dish contribute to a taste explosion. The grilled short ribs take on a nice char from the sweetness in the marinade, the taco sauce packs just the right spicy punch, and the fresh kimchi brings contrasting crunch and freshness to the tenderness of the beef. The brightness of the lime and cilantro finish everything off by cutting through the richness of the other ingredients. My only suggestion—double the recipe! This was so good that 3 of us finished the entire batch and probably would have gone back for more! The marinade made 3 cups and I only needed 2 cups for the short ribs so I used the other cup to marinate 1 pound pressed tofu which I later grilled but it would have been great on chicken as well. I used store-bought gochuchang chile paste and was able to buy freshly made kimchi from a local restaurant. The fresh kimchi really added a nice crunch to the tacos. I also grilled the fresh corn tortillas on the grill. The taco sauce was addictive! This was so good that the 3 meat eaters at the table ate all the short rib tacos AND helped our 1 vegetarian guest polish off the tofu tacos, too.

Wowza! These are not your average tacos. After eating these kimchi tacos, I don’t think I’ll be able to ever return to “normal” tacos. Absolutely fantastic and loaded with layers of flavor. The taco sauce was perfect. I used regular beef short ribs and deboned them myself. They were about 2 inches thick so the grilling time was 5 minutes per side for medium-rare. The resulting meat was incredibly tender. I used a store-bought kimchi (Wildbrine Korean Kimchi) and it worked perfectly with the tacos. Can’t wait to make again!!! This serves 4 but not if you’re super hungry. There’s lots of kimchi and taco sauce left over.