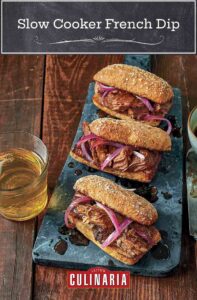 These slow cooker French dip sandwiches are an easy approach to a weeknight dinner made with flank steak and caramelized onions in a slow cooker or Crock Pot, and served with au jus for dipping. Folks will be declaring it the best.

Sure, these slow cooked French dip sandwiches are easy to make. But they also make it easy for the cook to keep everyone at the dinner table happy. No small feat.

Simply toss everything in the slow cooker in the morning. Then later that day say hello to tender shredded beef and silken caramelized onions that you heap on toasted rolls.

Because this simmers for so long, flank steak is substituted for roast beef, the traditional meat in a French dip, so a tougher cut of meat with an impressively robust taste turns surprisingly tender. Thanks to the old low-and-slow treatment. Crock-Pot, we sing your praises.–Angie Zoobkoff

The beefy flavor of flank steak and meltingly tender caramelized onions in these beef dips stole the hearts of our testers. This easy slow cooker meal is topping their lists for “convenient and super tasty dinners.”

How to make these beef dips

A French dip is a sandwich made with shredded or sliced beef that’s topped with caramelized onions and sometimes melted cheese. It’s served on a bun with au jus on the side for dipping.

What should I serve with my French dip?

Serve these easy sandwiches with French fries or roasted potatoes, both of which are great for dipping in the au jus. Round out the meal with a salad, such as this purslane salad or this autumn coleslaw.

Can I add cheese?

Definitely. Some of our testers enjoyed this with a slice of melted Provolone or Meunster cheese on top of their sandwiches. 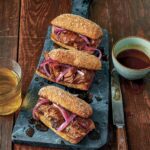 These tender slow cooker French dips are so simple to make that you'll be having them every week. Flank steak is so underrated but this recipe will show you just how incredible it is. And don't forget the pickled onions!
Prep 30 mins
Cook 7 hrs 30 mins
Total 8 hrs
Mains
French
6 to 8 servings
452 kcal
5 / 2 votes
Print Recipe 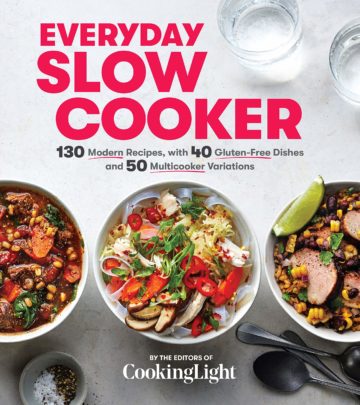 Slow cooker meals certainly can’t be easier and this one has made the top of my list for convenient and super tasty dinners! The onions caramelized and cooked down until they were meltingly jammy and the rich beefy sauce had such a wonderful umami flavor that infused the beef and onions so perfectly. I love the beefy flavor of flank steak but would never have guessed it could transform itself into having such a juicy and tender texture.

I cooked the steak on the low setting for 8 hours and the steak was falling apart into shreds. I only ended up with about 1 1/2 cups cooking liquid so I opted not to reduce the liquids down further, and just got the sauce to boil in a saucepan, added the cornstarch slurry, and let it simmer for a minute to thicken up. Done!

Then I buttered and toasted some deli hoagie rolls in a skillet and served the shredded beef, onions, and sauce on the rolls along with a side arugula salad with a bracing vinaigrette and dinner was fabulous.

These Crock Pot French dip sandwiches will be making repeat performances. I’ll add 2 onions the next time because they cook down so much. You can never have enough silky caramelized onions on a juicy shredded beef sandwich. So good!

This French dip sandwich recipe was a delicious and easy meal, perfect for a day when there’s not much time for cooking. The slow cooker makes all this possible. It’s perfect for a cold winter evening meal or for a summer dinner on the deck.

On some of the sandwiches, I melted some provolone cheese on top—because everything is better with cheese!

For a midweek stress-free dinner, this slow cooked French dip is a good recipe. While it might not deliver on the same level of flavor and texture as a steak sandwich where the meat was seared and thinly sliced, it does make up for it with ease, juiciness, and a flavor reminiscent of braised beef or pulled pork.

Cooking the meat with a lot of onions ensures that there is plenty of juice in the pan that has a lot of flavor to make the dipping “jus.” I also like that it can be one of those base, blank canvas recipes that can be adjusted with different flavors to make different dishes.

Definitely avoid anything too hoppy for cooking, like IPA or a pale ale. I used a lager from Sierra Nevada that was mild but had some toasty notes. It worked very well.

At the 7-hour mark, the meat was tender but not falling apart. It was more on the sliceable side than the pull-apart side, though. It was a little tricky to get the steak pulled with 2 forks but it worked. I thought the meat shreds were a little long, so I used a knife to cut them into about 2-inch lengths. Maybe it helps if the flank steak is cut to shorter lengths before cooking it too.

A recipe simple enough for weeknight dinners is something I really like. It was easy to make the paste and, with a little help prepping the onions while I did the meat, we had everything ready to go in the slow cooker in about 15 minutes.

The house smelled divine when I came home 8 hours later and we couldn’t wait to have dinner. Thickening the sauce really only took a few minutes after straining as I shredded the meat, which was tender and very flavorful. We found the sauce to be just a little salty but not unpleasantly so.

As I was putting things away after dinner, I realized I had used regular soy sauce and not low-sodium. I believe the reason it seemed a little salty was my mistake. I would suggest if the only soy sauce you have is regular and not low-sodium, the recipe is still doable, but I would cut the salt down to 1/4 to 1/2 teaspoon depending on your preference. A Winterfest lager was our choice of beer.

It’s easy enough to make for a weeknight dinner with a little planning and help in the kitchen.

These slow cooker French dip sandwiches were delicious! There’s little hands-on time, making it a great weeknight option. The meat was very shreddable. For extra au jus, I would suggest either adding more beer or stock to the crockpot.

These sandwiches were pretty simple to prepare and, with the slow cooking, come together incredibly tender and delicious. I added crisp pickled red onions when I served them and I found they added just enough tartness and crunch.

Locally brewed lager, Puppers by Stack Brewery, is a medium malty beer with honey and grain overtones. I think it worked very well with the spices, and the whole wheat rolls especially.

I cut the flank steak into a few smaller pieces as they seemed to fit in the slow cooker better this way. After 8 hours on low, the beef shredded easily and quickly with 2 forks. I did find that the sauce took longer to reduce than expected but I suspect I didn’t have it at a high enough boil.

The only rolls I could find were large, so I cut them in half and it made 8 servings. I served them with a few more cans of Puppers lager and kale slaw and the meal was thoroughly enjoyed.