Chicken biriyani is made with chicken marinated in yogurt, chile powder, and garam and biriyani masala layered with fragrant, spiced basmati rice, and caramelized onions.

With its endless layers of nuanced flavors, chicken biriyani is perhaps India’s most iconic comfort food. As the author of this recipe explains, “A perfectly made bowl of chicken biriyani is India’s answer to Italy’s spaghetti, France’s beef bourguignon, and Spain’s paella.” As with those other comfort food classics, chicken biryani does take a touch of time and patience to assemble. But the sensational mingling of gently spiced chicken, fragrant rice, and caramelized onions more than justify the making of it.–Angie Zoobkoff 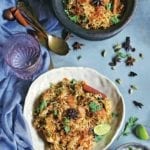 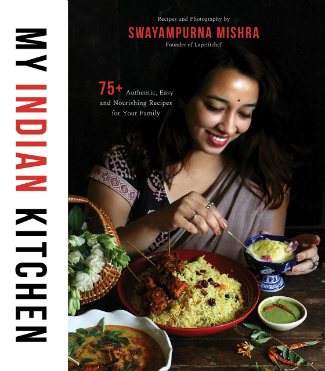 For the layering components

You can easily find Kashmiri chile powder online or in Indian and Middle Eastern markets. However, you can also make a quick substitution using everyday ingredients by relying on a ratio of either 2:1 or 3:1 sweet paprika to cayenne pepper, depending on how hot you fancy your chile powder.

This chicken biryani is just heavenly. The chicken is very tender and juicy. Unbelievably so. The depth of flavor achieved here is astounding. Don’t cook this thinking you’ll be able to restrain yourself, because you won’t. This will make a regular weekend appearance in our house from now on.

I didn’t have any biriyani masala, so I made my own based on the online recipe linked to in the ingredient list. It took 10 minutes and made enough for around 6 of these biryani recipes. I would recommend this recipe if you can’t locate the store-bought spice mix.

I think the fact my onions were thinly sliced made these a success. They were nice and crisp and very tasty. Even on their own!

When layering the ingredients, I thought I wasn’t going to have enough rice. The second layer of rice, in fact, wasn’t completely covering the previous layer of herbs and onions. However, once it was cooked, this wasn’t an issue, either visually or in terms of proportions.

I added extra chicken (6 thighs in total) and with the amount of rice instructed in the recipe, there was enough for 2 very greedy people with leftover rice that I’ve frozen and will have for lunch with a fried egg!

I made some quick chapatis to have with this. I appreciate with all the rice this may not be everyone’s choice but it was a great combination and I would serve it this way next time. (Smear your chapati with a little salted butter. heaven.)

Biryani is absolutely one of my favorite dishes and one that I break out for very special occasions. It’s complex and time-consuming to make, but the layers of flavors and textures make it so outstanding.

This is the first time I used a prepackaged biryani spice mix and it added an entirely new level of taste that I was unable to get previously. I couldn’t find the brand that the author suggests; I could only find Shan Sindhi Biryani seasoning mix. (It does say right on the box that it is “hot and spicy,” which I should have believed.

I would caution anyone making this to read through the recipe fully and plan ahead. The various parts of the recipe do take some time but much can be put together the day prior (the spice mixture for the rice and some of the ingredients for the marinade). I marinated the chicken for 16 hours and the chicken had the intense flavor that I expect from biryani.

The spice mix used to flavor the rice is absolutely perfect and made the most beautiful counterpoint to the spicy chicken and layers of crisp onions. I used onions sliced quite thinly so they got crisp in the time allotted. Everything was cooked perfectly.

I used various pieces of meat from a whole chicken, including both dark and white meat. For the green chiles, I used 2 large Anaheim chilis because I like the flavor and brightness and I knew the red chiles I had were very, very hot. As I said previously, the packaged spice mix said “hot and spicy” and it was made in Pakistan. I should have known right then that I was in over my head. Still, it didn’t make my eyes water when I smelled it, so I thought, “Go on, add TWO whole Thai chiles.” And that was definitely a mistake. I think, if making this for guests, I would have erred on the side of caution but I didn’t this time and it was a little too much.

The marinade made quite a bit. I could have probably covered twice the amount of chicken.

This recipe made 4 large servings. It was a little too spicy for us but served with lots of fresh naan and cool raita, we got through it. This recipe is definitely on par with the one I have been using for years and I will likely return to it in the future.