Trenette with langoustines is a simple, yet incredibly elegant, dinner. Pasta gets tossed with langoustines (or shelled shrimp), garlic, chilies, and parsley. Done and done–you can be eating a dish in less than 30 minutes.

Trenette is a pasta that’s long, narrow, and flat. It’s popular in Genoa and Liguria and is the pasta of choice for their regional pasta dish made with pesto, string beans, and boiled potatoes.–The Silver Spoon Kitchen

LC Simple Is As Simple Does Note

This recipe has a sort of alter ego. See, simple as this recipe is, it can be made even simpler when you save yourself the search for tricky ingredients and instead substitute linguine for trenette and shrimp for langoustines. After all, simple is as simple does… 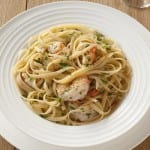 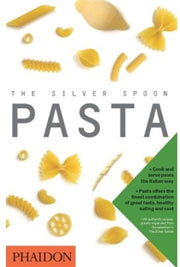 This is a great pasta recipe—once you have the langoustines out of their shells, that is. They’re a time-consuming ingredient to work with, but the lovely sweet flavor of the meat is worth it and well complemented by the chile, garlic, and parsley. I would allow plenty of time to get the langoustines prepared and would also have them ready alongside the garlic and chile before starting as it’s a fast-paced recipe. My only caution would be to follow the timing in the recipe, and to use a milder form of chile; if the chile is in the oil for too long it will overpower the other flavors in the dish. I didn’t have confidence (oh me of little faith!) that the chile heat and flavor would transfer to the oil after only 2 or 3 minutes, but it absolutely did. In short, a straightforward recipe that delivers lovely flavors.