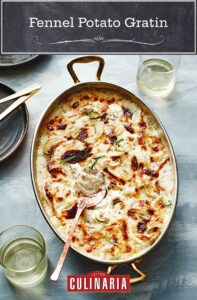 This fennel potato gratin, made with layers of thinly sliced fennel and potatoes, and a thick creamy white Cheddar sauce, is one of the most comforting side dishes we’ve ever experienced.

If what you’re craving is something modest and virtuous, this fennel potato gratin isn’t for you. If, on the other hand, you’re seeking a sorta indecently indulgent side dish that’s rich with soul-satisfying spuds smothered with cheese sauce, then by all means, consider this a keeper. Satiating, sophisticated, yet still quite simple.–David Leite

The rich decadence of this creamy casserole made it a quick favorite among our testers. They loved that it was comforting, yet remained an elegant side dish. Judith P. also loved reaping the rewards of “trying something familiar in a new way.”

A gratin is a vegetable or pasta dish that is made with a cheese sauce and is sometimes topped with crispy bread crumbs. Potato gratin is the most common, but gratins can be made with almost any vegetable, like this root vegetable gratin, Brussels sprouts gratin, or asparagus and asiago gratin.

Yes. You can assemble and bake the gratin up to 24 hours ahead of time. Let it cool, cover it tightly with foil, and stash it in the fridge. Rewarm, covered, in a 350°F oven until heated through. Remove the foil and broil as instructed in step 8.

What should I serve with this gratin?

This rich and creamy potato fennel gratin would be fantastic alongside grilled bavette steak with caramelized shallots. A light salad, like this celery salad or this shaved zucchini salad, would round out the meal nicely. 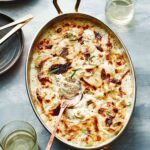 This fennel potato gratin, made with layers of thinly sliced fennel and potatoes, and a thick creamy white Cheddar sauce, is one of the most comforting side dishes we’ve ever experienced.
Prep 45 mins
Cook 1 hr
Total 1 hr 45 mins
Sides
American
8 servings
340 kcal
5 / 3 votes
Print Recipe 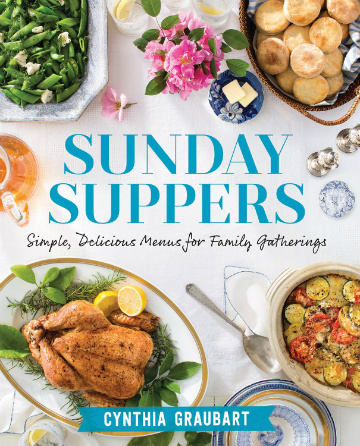 This potato fennel gratin was a sinful treat that was ready for the table after just resting for 30 minutes. My previous experience with scalloped-type potatoes had involved pre-making the day before then portioning onto cubes or rounds that held their shape after warming up… fussy, I know…but made for great plating. This recipe presented well on the plate with defined layers that held their shape yet remained creamy with a pleasant bite of both potato and aromatic fennel, almost floral yet hearty and satisfying.

I didn’t have a 2-quart casserole dish so I used a 1.2 quart dish and 3 ramekins. I am a fan of individualized portions. The smaller dishes were more caramelized, which was not a surprise. The larger dish required an extra 10 minutes in the oven than that expected by the recipe. This leads me to believe that a 2-quart dish might have needed even extra time unless this was due to oven temperature discrepancy.

I served this with grilled flank steak and a garden salad that also included shaved fennel. We also enjoyed it the following day as a main dish with an arugula and fennel fronds salad. Definitely making this again with the revised measurements! If your favorite creamy baked mac and cheese had a pasta-less cousin, this fennel and potato gratin would be it!

This may be the best potato gratin I have ever made.

This is a relatively easy preparation and yields a very rich result. The cheese sauce has just enough complexity with the shallots and nutmeg to make the flavor profile sophisticated yet family friendly. We like fennel, so when looking at my small bulb, I also sliced up the stalk just as far as it was solid and included the chopped fronds. If your fennel was larger, that would be great because I didn’t have quite enough fennel left for the final layer.

I used a mandoline to thinly slice both the potatoes and the fennel, wearing a safety glove. I layered the very thin layers of potato overlapping to be opaque, and only had potatoes when I got to the top, or fourth, layer.

I used Yukon Gold potatoes as those were the potatoes on hand and they were very satisfying but if the dish was made with a more floury potato you probably only would need 50 minutes. You can approximate half-and-half with cream and whole milk. If you’re scant on Cheddar, a portion of aged table cheese, similar to toma, or even gouda or gruyere would melt well and blend in for a small portion.

Try to not overfill the baking dish and maybe put a tray or sheet of foil on the lower shelf of the oven in case it bubbles over, and be careful when removing it from the oven before broiling, because the dish is very full with bubbling liquid around the edges. Use a spatula around the edges when you remove it from the oven to ease the crunchy edges from the dish so you get to serve them instead of scrub them off the baking dish later!!

While absolutely delicious on the evening prepared, portions of this gratin also reheat nicely in the oven in a buttered dish (I used a 350℉ oven for about 30 minutes and tenting with foil to keep it from browning too much until the last 5 to 10 minutes).

This tastes very decadent yet is made with the most modest ingredients and method.

Reaping the rewards of trying something familiar in a new way is what this fennel potato gratin recipe was for me. The end product didn’t resemble the photograph accompanying the recipe—it was far more wonderful looking.

While I don’t possess a broiler-proof ceramic pan, I do have our mother’s old, flame-red, ovoid, enameled cast iron Descoware dish made in Belgium and it served us so very well. The sauce was so thick, I was concerned that I wouldn’t get it poured over the potatoes and fennel before it began to firm up a bit!

I worked with 2 enormous russets that weighed in at a total of 2 pounds. The fennel flavor of my little bulb, regrettably, didn’t rise through all the potato-y, buttery, Cheddar-y depth to say “Fennel! Present!” Mea culpa.

Oh my god, it was beautiful. Before sliding the gratin into the oven, while placing the foil over the top of the dish, I was a little concerned about its gloppy, I-don’t-know-about-this appearance. But it transformed into a tender, temptingly golden brown entrée, and after 7 minutes under the broiler and being topped with the fresh rosemary and fennel aromatics, the transformation was complete and satisfying, and dinner was served, simply, with a green salad and a Decoy sauvignon blanc. Sigh.

And mind you, this is during a southern California Memorial Day heating-up weekend. Imagine serving this during a chilly spell with a beautiful roasted bird, slow roast lamb, or roast beef. And, sigh, again.

This was a fantastic potato and fennel gratin! If you’re looking for something special to make that isn’t your normal run-of-the-mill au gratin potatoes, this recipe is a great place to start. I really enjoyed the flavor of the white Cheddar cheese in the sauce. The cheese sauce was easy to make and it was oh so creamy!!!

The fennel added that extra special layer of flavor. I increased the recipe by 1 1/2 times as I wanted 12 servings. I had 2 layers each of potatoes, fennel, and sauce and used a 9-by-13-inch baking dish to bake them in. The potatoes required an additional 20 minutes of baking time which was probably due to the additional amount of potatoes I was preparing.