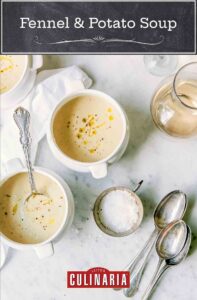 This marvelous fennel and potato soup, reminiscent of the classic French potato and leek soup known as Vichyssoise, gets its silkiness from butter, a touch of cream, and Yukon Gold potatoes. Onion, garlic, and fennel seeds lend flavor.

This creamy, smooth-as-velvet fennel and potato soup tastes far more indulgent than it actually is. Which, trust us, is a good thing, because if you’re anything like us, after one sip you’ll be wanting to sip it straight from the bowl.—Renee Schettler

Can I serve this soup cold?

You certainly can. Vichyssoise, the soup that it reminds us of, is a puréed leek and potato cream soup that is traditionally served cold. While you may prefer the coolness in the summer, it’s still quite lovely served just below room temperature.

What kind of potatoes should I use for potato and fennel soup?

Marte Marie Forsberg recommends Yukon Golds but Russets can also be used if that’s what you’ve got. Yukon Golds will give you a creamier texture, though. Don’t use anything waxy—they won’t break down and purée the way you want.

What else can I make with potatoes and fennel?

After one taste of this creamy soup, you’ll likely be smitten with the pairing of potatoes and fennel. Try this fennel potato gratin for another outstanding combination. 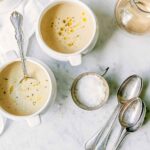 A spectacular riff on the classic French potato and leek soup known as vichyssoise, this is astoundingly good. So much so that you may just find yourself raising the bowl to your lips.
Prep 15 mins
Cook 35 mins
Total 50 mins
Sides
American
4 servings
289 kcal
5 / 7 votes
Print Recipe 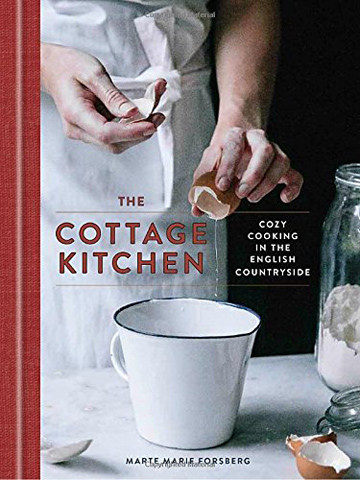 I just love this fennel and potato soup. Potato soups of all stripes are soothing and delicious, but this variant with fennel is extra special. The combination of the anise flavor with the silken puréed potatoes provides just that bit of excitement to what might be bland comfort food.

I’m going to confess that I went a bit heavy on the anise seed. Do it if you love anise or leave them out if you’d prefer a more subtle soup. Between the browning of the aromatics, and the fact that there was some color to my vegetable stock, my soup came out quite a bit more brown than what is shown in the photo. It wasn’t really a pretty soup, but it tasted delicious.

What a fabulous twist on the classic potato and leek soup! I’ll absolutely make this again, doubling the recipe to ensure there’s enough for seconds, and more to enjoy the next day. The soup is creamy without being heavy and is as delicious and comforting as it smells. It’s wonderful by itself but it would be a scrumptious accompaniment to any hot sandwiches. (There are quite a few pretty great grilled cheese recipes on LC—hint, hint!)

One thing I would simplify next time—I’d add the potato cubes when the vegetables are just beginning to become soft on the edges (no transferring them to a plate), then deglaze the pan at once after adding the entire amount of stock. The second tablespoon of olive oil was not needed for cooking; I drizzled it on the finished soup.

Rich, creamy, and silky smooth, this showstopper of a soup deserves a TC based on taste alone. The flavors worked so well together and it was simple to put together for a weeknight dinner where everyone needed to be out of the house quickly but it could easily make an elegant starter for a dinner party.

This fennel and potato soup has such great flavor that there was no need to add any salt at the end of cooking. After puréeing, I could tell that it needed a little more liquid so I added about 1/2 cup. The consistency was perfect.

The addition of ground pepper, a drizzle of olive oil, and a splash of cream before serving elevates the soup to formal dinner party status or just have it for lunch if you choose as we did. Serve this soup hot, warm, or even room temperature. This recipe will serve four very nicely.

This fennel and potato soup is divine! Rich tasting without being heavy. The fennel’s taste is present but not overpowering. I used a “Better Than Bouillon” vegetable base since I had no stock and didn’t have time to make some. This is perfect for either a light dinner with a roll or salad or as a first course.

I love soup, but I do not always have time to spend all day making it. This soup was easy enough to make on a weeknight and was completely delicious. Velvety smooth and lightly flavored by the fennel, this soup is one that we will enjoy over and over again. I liked it with a sprinkle of chopped chives!

This is such an easy yet sophisticated soup—on a weeknight, you might just buzz it up with an immersion blender, for a dinner party it only takes a moment to put it thru a blender and sieve if you want to be really fancy. The flavor gets a nice backing from the fennel and anise seeds. I would be tempted next time I make this to use a splash of Pernod to deglaze any fond before adding the potatoes and butter. I had a fresh batch of stock on hand that was the perfect amount for this.

Timing is close to spot on—it will depend on what kind of potatoes you use (I used 1 waxy red and 1 Yukon Gold to match the amount needed most closely from what I had on hand). The soup is lovely with a drizzle of olive oil and a grind of pepper, a sprinkling of Maldon salt. It reheated beautifully two days later and I would feel comfortable either making it ahead or keeping up to 3 days in the refrigerator. This is an excellent basic soup to have in your repertoire and was a good reminder of how nicely fennel works. I often use sliced fennel in place of onion for braising lamb shanks but forget to buy it often enough.

You know that a soup recipe is a winner when, after your second spoonful, you put your spoon down, pick your bowl up, and start drinking your soup from your bowl. That is exactly what I did when eating this soup.

The recipe didn’t make enough soup for 4 people as stated. It could possibly serve 3, if you have something else with it, such as a salad, or as some people like with soup, a sandwich. We had a large salad alongside, so I had enough left for a mug-full of soup the next day for lunch. I sipped some cold, and was reminded of vichyssoise, a cold potato leek soup. It was as good cold as it was hot.

I adore fennel! Whether raw in a salad, thinly sliced on a crudite plate, cooked until sweet, or in any form. Any way you present it, I adore it. And I’m definitely stashing this recipe away for another cold-weather dinner idea! I was excited to try this recipe for fennel and potato soup because it pairs not only fresh fennel with the onions, garlic, celery, and potatoes but also includes the added zing of anise seeds and/or crushed fennel seeds. The texture of this soup, thanks to the starchy potatoes, was super smooth and velvety. The flavor was wonderful and, overall, it was perfectly creamy.

My only comment on the recipe itself is that I don’t know if the extra step of removing the cooked veggies at the end of Step 1 is needed? Why do you need to cook the potatoes by themselves in extra butter? I think it would work equally as well and would save some time if you just add the peeled, diced potatoes into the veggie mixture after they cook initially for 5 minutes, added in the stock, and cooked until the potatoes were tender. And to scrape the bits off the bottom in Step 2, I would instead suggest deglazing with some white wine.

I did not use anise seeds, but did use the crushed fennel seeds for the added fennel flavor. I used heavy cream for the enriching agent. The recipe made four generous (large soup bowl) servings, but would feed six if you are serving this tasty soup as a first course.