This root vegetable gratin, made with turnips, rutabaga, celeriac, and potatoes that are cooked in a cheesy cream sauce, tastes so comforting and indulgent you’ll find it hard to believe it’s full of vegetables.

There is something very satisfying and tranquil about preparing this root vegetable gratin. If the thought of peeling and slicing these vegetables puts you off, think again. It sounds perhaps more daunting than it really is. You’ll be done in no time and it’ll be well worth the effort. This is a very simple dish, very impressive, and hugely delightful. Serve with a cheese platter, bread, and a green salad.–Laura Washburn

Can’t tell a celeriac from a turnip from a rutabaga? We’ve been there. It may seem as if it doesn’t matter whether you get the right root vegetables given you’re only going to bury them under behemoth amounts of cream and cheese. And, truthfully, this gratin works just as well with just one type of root rather than three. Still, here’s a cheat sheet for the curious as well as ideas on what to do with odds and ends leftover from this rich, gooey gratin.

Celeriac–This roundish root vegetable is rather alienesque, with a greenish tinge to its fuzzy creamy coloring and a bumpy, lumpy, somewhat fuzzy appearance. Not surprisngly, it’s rather celery-like in taste. Slip some in place of up to half the potatoes in a mash or thinly shave it and toss it with a creamy dressing as a raw winter slaw.

Turnip–The most common is white with a purplish halo near its crown. Rather sharp when tasted raw, turnips soften in both texture and taste when cooked. Something akin to a potato with a hint of horseradishy heat. Seek them out at farmers’ market, where you can find them with their tops still attached in fall. The green leaves are unspeakably healthful and actually quite compelling when sautéed in olive oil with garlic. The root part is lovely in any manner of kitchen sink soups.

Rutabaga–Resembling a large turnip but with a yellowish cast that’s often coated with wax, rutabagas bear a more robust, earthy, bitter taste than turnips. That said, this root vegetable, too, mellows considerably with long, slow cooking. Try thickly slicing them, tossing with olive oil, and roasting in a 450°F(232°C) oven until soft and sweet. 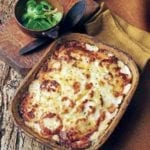 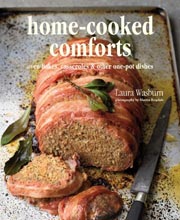 This deliciously creamy, hearty gratin was the hit of our dinner party. A dish like this is simple in terms of preparation and ingredients, but is so impressive in terms of uniqueness and taste. At first, I was surprised that the recipe didn’t call for a fresh herb (like thyme), but it really didn’t need one. The combination of root vegetables in this recipe was brilliant—my dinner guests kept asking, “What’s the darker yellow vegetable in here?” referring to the rutabaga. We served the gratin alongside a currant-glazed pork loin. The only suggestion I have is to add 1 1/2 cups of milk instead of the 1 cup that the recipe calls for, as I felt that a bit more liquid was needed to cover the vegetables before going into oven. This way, you can rest assured that each slice of vegetable will be tender, and deliciously creamy. I wanted to comment as well on the use of sea salt in the recipe—what a great choice! This recipe will be a go-to for many meals to come, I’m sure of it.

This is a dish that pleases meat-and-potatoes guys and well-rounded foodies alike. It’s delicious, simple, and substantial. I found the best way to get thin, consistent slices of veggies is to use a mandoline, which cuts down on prep time. I used 11 ounces of parsnips, choosing them because I always see them grocery stores, and they’re usually pretty inexpensive. TIPS: I suggest cooking the gratin for about 55 minutes, which is plenty of time for the cheese brown and bubble, and to soften the vegetables. Also, use white pepper for seasoning, because you don’t want to blemish the cream sauce. If you have it, this dish is amazing with just a pinch of grey sea salt right before serving.

This is an excellent dish for a winter dinner. It’s also very easy to make. I used cheddar cheese and sour cream instead of crème fraîche, and I didn’t warm it—just mixed all of the liquids together. I used the suggested roots, which are very tasty during winter, but also added white carrots to replace half of the potatoes. The baking time was about 75 minutes. I’ll try this recipe next time with different vegetables and cheese, and with additional salt and black pepper.

This Root Vegetable Gratin was a hit in our household! I don’t cook with turnips and rutabaga very often (and when I do, not very successfully), so this recipe is a keeper. I actually doubled it because I didn’t know what to do with the leftover half of rutabaga. I sliced everything on the mandoline so that everything would cook evenly, then divided the gratin into two casserole dishes—but I removed one of the dishes from the oven after an hour to freeze it for later. The original gratin did require the 1 1/2 hour cook time, and each of the vegetables retained their unique character. The amount of sauce didn’t overwhelm the vegetables, so the dish wasn’t as heavy as it could’ve been.

I made this last night for a group of friends coming over to watch some football. It was a winner. Everyone was raving about it, but better yet, my picky tween daughter also liked it! It was a surprise to taste the different root vegetables in every bite—there was something sweet, then a tad of crispness mixed with a touch of bitterness, the latter most likely from the turnips. Next time, what about adding blue cheese instead of Gruyère? Also for those who have no patience for slicing, use a mandoline or a food processor.