Aligot, made with creamy mashed potatoes, cheese curds, and mozzarella cheese, are the richest, cheesiest, and most comforting potatoes we’ve ever tried.

Potatoes can be used in so many ways: gnocchi, French fries, smashed potatoes, mashed potatoes, potato dauphinois, pomme purée, and, the highest form of potatory, the aligot. When made well, it should be very smooth. I hate mealy aligot potatoes that happen when the potatoes aren’t hot enough and are overworked at low temperature. You have to get the texture of your base just right before adding the cheese. Too much butter or fat or milk and the whole operation could go sideways. Please follow the instructions and you will have perfect ribbons of cheesy potatoes.–Matty Matheson

What are the best potatoes for aligot?

Without a doubt, the best potatoes for making aligot are Yukon Gold. They have a luxurious texture and cream taste is put to good use in aligot.

Where did aligot originate?

According to legend, Aligot originated in the monasteries of L’Aubrac, a small village in the Massif Central region of France during the 12th century. Originally, it was made with bread and tome fraîche cheese emulsified with broth. Later, potatoes were substituted for the bread. The monks served it to religious pilgrims walking the long route to Santiago de Compostela, in Spain.

What can I serve with aligot?

Traditionally, the folks in L’Abrac, France, serve aligot with sausages, roasted lamb, veal, and pork. But we see nothing wrong with doing a face plant in the pot and calling it dinner. As far as wine, Aligot is traditionally served with an Auvergne red wine. 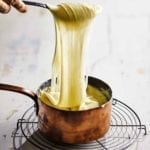 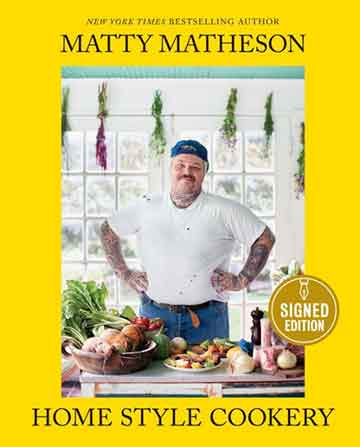 I will reveal here that when I saw this recipe come up as a test, I actually shrieked with excitement. I’ve seen gorgeous, stretchy, buttery potatoes online and had been waiting for an excuse to try them. I had been putting it off because I thought they would be difficult to make (they are absolutely not) and also they were the epitome of fat-filled cooking (and they definitely are). Non, je ne regrette rien!

I don’t have either a food mill or a potato ricer, but that didn’t present an obstacle. I dumped the hot potatoes into a colander and pushed them through using the back of a wooden spoon. This worked like a charm, wasting very little of the potatoes. I found the amount of stirring wasn’t as extensive as I thought. Make sure to shred your cheese into smaller pieces and it will take very little time or require much upper body strength.

I stirred for nearly 4 minutes before they were thick, stringy, and melty. I seasoned and served right away. Be sure that all your other food is ready because these cool quickly and the texture changes drastically – it gets hard and takes on the texture of cheese. Still delicious but harder to serve. I found that putting the lid on and giving a good stir helped with second helpings.

I had a hard time deciding what to serve this with because I knew that it would be incredibly rich. And, honestly, I didn’t want to be distracted. So, I just made this and we all tried it. This amount will serve 6 easily, as you really can only eat so much. We had half of it leftover and reheated it the next day; it was just as good.

The recipe is amazing! Extremely easy to make, super straightforward, and utterly delicious. By far, the best potatoes I’ve made and eaten in my life. It definitely worked and it looked exactly like the picture!!

I couldn’t find the fresh cheese, so I used Swiss instead.

From stove to table, and after resting about 5 minutes on the table, the potatoes had a stringy texture (like pure cheese goodness!). After one hour of resting and without reheating, the texture was creamy and smooth but not stringy. Still looked like a potato pure made by a pro and still super delicious.

These aligot potatoes were as easy as making normal mashed potatoes, but with a much more elegant result. The cheeses added an interesting texture and I was impressed that the potatoes didn’t turn out super gummy with all the stirring. I can see myself making this for a change of pace, but I don’t think they’ll become new mashed potato go-to. They seem a little too sinful for day-to-day.

These didn’t change my life like I hoped they would. I’ve seen recipes swirling around on the internet, so I was really excited to try it out.

The cheese did get a little tight as the potatoes sat, but it wasn’t an unpleasant texture.

Reading ahead, I saw no need to use a food mill. There’s plenty of mixing in the following step, so I used a potato masher instead. This worked out fine. The potatoes were completely smooth by the end of step 3. Maybe even by the end of a few minutes of mashing in step 2, actually.

This step says to use “super low heat,” so I put the pan on the warming plate of my Aga, surely at least a super-low heat source (maybe warmer). After 10-plus minutes of mixing with occasional stops to manually pluck out the cheese curd lumps and squish them between thumb and finger to speed the process along,

I had a potato mixture with dozens of small lumps of cheese curd from the first addition of cheese and curds. Hoping the lumps would melt into the potatoes with more stirring, I added the remaining cheese and curds. After a total of 20+ minutes, I moved them to an electric burner set to 3 or low heat. I assumed the concern would be with burning on the bottom of the pan but this was not a problem for me.

With this additional heat and another 5 minutes, the cheese was completely incorporated into the potatoes, and stretching worked as the recipe suggested. To be clear here, I did 25-plus minutes of uninterrupted mixing to get the desired result. I would not wish this job on anyone, but I suspect I could have cut the time in half had I used low to medium-low heat from the start.

Four diners tried the potatoes, loved them, and at least three went back for seconds—a bit unusual with this group. We ate only about half the potatoes, so my serving recommendation is keeping the potatoes on super low heat during the meal worked fine. The texture didn’t degrade at all over the 30- to 40-minute meal.

Addendum: as leftovers, the potatoes were fabulous in lunches for the next 4 days. A large scoopful of potatoes, a few tablespoons of cream and/or another sauce, a few bite-size pieces of leftover meat, and whatever else struck my fancy from the refrigerator (olives, previously cooked vegetables), all into a pot, heat in the oven until steaming, and enjoy a rustic lunch better than you are likely to find at any nearby restaurant.