This Indian spiced crawfish boil is an Indian-inspired riff on a classic seafood boil of crawfish (or shrimp) that adds a masala spice blend to both the boil and the dipping butter.

I live in the South, and we do love a seafood boil in these parts. Both Cajun and Low Country styles just holler, “Time to party!” I make my seafood boil with a tandoori spice masala. It’s a fantastic twist on a seafood boil. Folks will be rolling up their sleeves and digging into these spiced “mudbugs” dripping in well-seasoned butter.–Asha Gomez 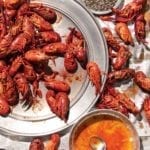 This Indian spiced crawfish boil is an Indian-inspired riff on a classic seafood boil of crawfish (or shrimp) that adds a masala spice blend to both the boil and the dipping butter.
Prep 25 mins
Cook 5 mins
Total 30 mins
Mains
Indian
6 servings
568 kcal
5 / 2 votes
Print Recipe 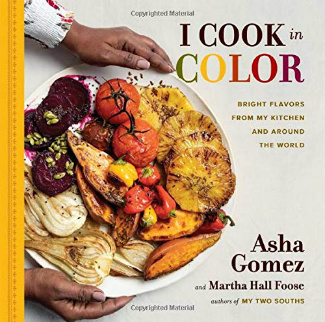 For the tandoori masala

For the butter sauce

I’m from New Orleans, LA, and I’m very particular about a crawfish boil. Crawfish aren’t in season so I used shrimp. I was completely shocked at how awesome this recipe is. I don’t know if it would have the same review if it were crawfish. But with the shrimp it was delicious. The butter is delicious and adds another level of flavor.

The only thing I added was a little more salt to the water to boil the shrimp as I tasted the water before adding the shrimp. I added 30g of salt and it was perfect. I cooked the shrimp for exactly 5 minutes. I would say this dish is enough for 4 people not 6. And if it were crawfish it would be maybe 2 servings as most of the crawfish is waste in comparison to the amount of meat.

I was a little intrigued by this recipe. We love a good shrimp or crawfish boil, and couldn’t help but wonder how it would translate to Indian spices.

I ordered Kashmiri chili powder and made the masala from scratch according to the recipe using Diamond Crystal kosher salt. I peeled and deveined the shrimp, so no legs or shells. As I only had 2 pounds of shrimp, I halved the recipe for the masala as well, otherwise I wouldn’t have had enough saffron. (There is quite a bit of the spice mix left over—good thing we liked it.) The dish came together quickly once I finished peeling the shrimp and making the masala mixture. I’d say 30 minutes start to finish, definitely a plus. It would have been quicker if I’d bought peeled and deveined shrimp.

The instructions were clear and easy to follow. My shrimp were 16 to 20 per pound and took 3 to 4 minutes to cook and become opaque. I originally tossed the cooked shrimp with half of the butter sauce, then decided to add all the sauce to the shrimp. Served with rice. A half recipe served the 2 of us with probably a single serving left over—the hubby did go back for seconds.

Now for my wish list: this recipe cries out for a veggie or at least some parsley to sprinkle on top. Lightly sauteed zucchini maybe? A green salad? I’m sure you could add the usual corn and potatoes to the boil, but I don’t think smoked sausage would add anything, especially with as much butter as the recipe calls for. In fact, I think the butter could be cut back some without sacrificing any flavor.

I have yet to use the masala mixture on anything else. We very much liked the flavor, so it will be used on other meats/fish. I like the idea of the grilled chicken or fish. Actually, it would likely be very good on grilled shrimp using the butter sauce as a baste.

We really enjoyed this dish. It is so much easier to find shrimp in our local markets, which never have crawfish here in the Northeast. The use of tandoori masala adds great flavor to the butter and makes this dish a nice alternative to the classic Southern seafood boil recipe.

This recipe is simple to execute, yet so rich and satisfying. A shrimp boil in mid-December is the perfect way to reminisce about summer seafood months and this spice blend is beautiful. I ordered saffron threads but they haven’t come in the mail yet, so I substituted turmeric. I also couldn’t find Kashmiri chili so I used the paprika and cayenne substitute. The resulting spice blend isn’t very spicy (I might add more cayenne next time) but it is deeply satisfying. I appreciate the slight sweetness to it mixed with the fresh lemon.

When melting the butter and keeping it hot, a thick foam formed on top of the liquid. I decided to skim it off which I think was the right call. When the butter mixture settled, most of the spices fell to the bottom. No amount of mixing re-emulsified the mixture so I resorted to scooping each shrimp to the bottom of the butter cup to grab seasoning in each bite. It wasn’t the worst but it felt like a pro-tip that you’ve got to know.