This crawfish boil is our best recipe for this Southern classic. Made in Louisiana style, it’s easy to make and perfect for a backyard party.

A boil is a real event, so make this meal when you have ample time and lots of friends to share it with. Traditionally, guests peel the leftover uneaten crawfish so the hosts can save the meaty tails to turn into other delicious crawfish dishes, like étouffées, salads, and pies. You can do the boil inside on the stove or outdoors on a grill or on a propane-fueled burner.–John Besh

How much crawfish do I need?

Twenty pounds of crawfish, aka mudbugs, is what Chef Besh asks for in this recipe. Actually, what he says is that it’s customary to allow for 5 pounds per person—that’s double what’s called for in this recipe. Here, however, he feels pretty safe to assume that you’ll do just fine with only twenty pounds, given the plethora of other ingredients—potatoes, sweet corn, sausage, and artichokes—that this recipe will easily satisfy eight voracious eaters.

As to how to eat the slippery little suckers, it’s quite the hands-on affair. If you’ve never done it before, it can take a little practice to get the hang of the old snap and twist motion but you’ll get there. Have at the ready a roll of paper towels and some Wet-Naps you snagged from a local fast-food joint. And even more paper towels. 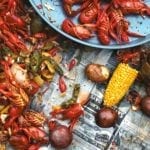 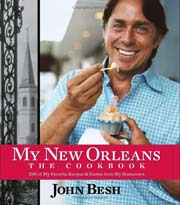 Having made “frogmore stew” or, as this recipe calls it, “crawfish boil” for years, I was excited to try a new recipe. You could tell this recipe was written by a true New Orleans chef, as it was much spicier than my usual version, but I loved the added depth of flavor.

All the main ingredients are the same, although we used shrimp instead of crawfish. I did use a lot less shrimp per person than the recipe calls for, as 20 pounds for eight people seemed like a lot. I didn’t cook this as long as is stated since I was using shrimp; when after about 6 minutes they tested done I turned the heat off. It’s still one of my all-time favorite meals. Next time I may just have to cut down on the cayenne for a few of us, although my parents and husband loved the level of spice.

This is a fun and totally satisfying experience. The seasonings and aromatics came together perfectly. I halved the ingredients since I only had four to feed, and instead of the 20 pounds of crawfish, I used 1 1/2 pounds of shrimp, which worked well in proportion to the halved ingredients. I pretty much stayed within the cooking steps and times stated in the recipe, which worked perfectly.

I used andouille sausage, in keeping with the origins of this recipe—chef John Besh is from New Orleans—and the heat it provided was just enough to make the dish interesting. I used a 12-quart stockpot, which was a bit large for the number of ingredients I had, and cooked the boil right on the stovetop. I used all of the ingredients except for the artichokes and mushrooms. I added a diced red pepper in addition to the green pepper, which gave the dish a bit more color.