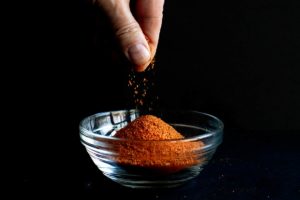 This Old Bay seasoning recipe, a favorite of Maryland, is a blend of celery salt, paprika, black pepper, cayenne pepper, cinnamon, ginger, and other spices that are exactly what you want to sprinkle on shrimp, crab boil, fish, fries, chicken…heck, you can dump this homemade spice blend on anything, really.

You may know Old Bay seasoning best as an indispensable ingredient in a classic crawfish boil. And that’s not inaccurate. But it’s so simpleminded to think of it exclusively in the domain of seafood. Go on. Shake the seasoning on everything else…–David Leite

What can I use Old Bay seasoning with?

– Mixed into crab cakes, natch
– Sprinkled on sweet corn
– Shaken or stirred into a Bloody Mary
– Dumped on fries
– Incorporated into the flour for dredging pan-fried fish or pan-fried chicken
– Dumped into seafood gumbo
– Stirred into Spanish gazpacho
– Strewn atop a baked potato
– Dusted daintily over naan
– Stirred into egg salad
– Rubbed on grilled fish that’s destined to be wrapped up in soft corn tortillas (that is to say, grilled fish tacos)
– Melded into hot crab dip
– Tossed with popcorn
– Whisked into egg white omelets
– Swirled into seafood soups and stews
– Whirled into homemade tartar sauce
– Dissolved in a brine for pork or poultry
– Sprinkled in bread crumbs for, well, just about anything
– Mashed into deviled eggs Injected into chicken or turkey
– Mixed into the coating for onion rings
– Heaped on homemade potato chips
– Added to mayo for a quick dip
– Mashed with butter, garlic, and Parmigiano-Reggiano and slathered on warm bread
– Rubbed between the meat and skin of a hen prior to roasting
– Sprinkled on homemade tortilla chips as they’re pulled from the oil
– Tossed with breakfast oven fries
– Added to stuffing or, if you prefer, dressing (and we’re quite certain you know the difference between them…right?)
– Combined with hummus
– Strewn on crawfish anything
– And, if you live in Maryland, lavished on just about everything else you can think to eat

How long will it keep?

Like most spice blends, it will keep for a few months if stored in an airtight container in a cool, dark place. Given the options listed above, we doubt it will last you anywhere near that long. 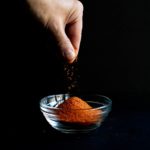 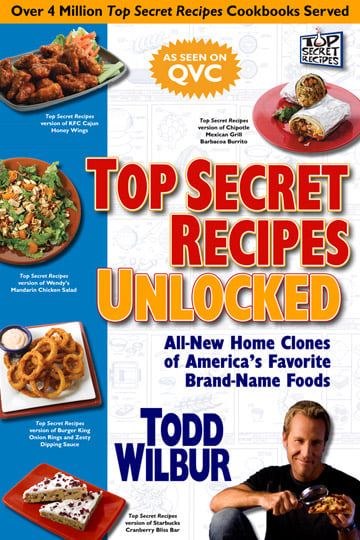 Oddly enough, I actually prefer this Old Bay seasoning recipe mix to the actual store-bought Old Bay. Could not figure out what it was about it that made me prefer this one, perhaps the quality of the spices. We used it on shrimp that we grilled and on fried calamari and loved them both.

Seasoning blends like this are a lot of fun to make and taste. This recipe yielded 1 3/4 tablespoons, which doesn’t go far. Next time I’d at least double it. This blend was used on roasted baby potatoes as well as on grilled shell-on shrimp.

As I had a tin of Old Bay on hand, I compared the two and found there to be more depth in the original tin; however, I enjoyed the freshness of the homemade version, which was well-rounded and complete. The two tasted vaguely similar, but I wouldn’t call this recipe Old Bay necessarily…perhaps just Darned Good Blend. Cardamom is one of my favorite spices and I’m happy to use it whenever possible. What I’d like to try is adding some crushed cacao beans to this recipe and rubbing it on beef.

When I travel, I always seek out local food gifts I can bring home and stash away for future gift-giving, such as the December holidays.  People always love the feeling of having been thought of during my out of town adventures.  On one trip to Washington, DC, I solicited the advice of a friend about what I could get that would be specific to the DC area, and special.  She immediately suggested Old Bay Seasoning.  As a Midwesterner, I was skeptical.  How could that grocery store standard be special enough for gift giving?

Having now invested five minutes in making this homemade Old Bay Seasoning recipe, my three regrets are that I did not know about the joys of Old Bay sooner, that I do not have as classy-retro a container for my Old Bay gift-giving, and that I didn’t just go ahead and double the recipe when it stated the quantity for a single batch would be 2 tablespoons.

Because we don’t eat fish, I’m going to elaborate on the list of suggestions with some more plant-based ideas!  A restaurant here has Old Bay as one of their bagel options; if you’re not inclined to making your own bagels, perhaps add it to a compound butter or to cream cheese for a spread, or simply sprinkle it atop plain cream cheese atop a bagel.  Add it to goat cheese for a spread, or to yogurt, Greek yogurt, labneh, or sour cream for a dip.  Try it atop cottage cheese.  Season pita chips, roasted chickpeas, pumpkin seeds, or sunflower seeds, or roasted almonds.  Season mashed potatoes, roasted potatoes, roasted vegetables, squash (yes, I’m thinking of the Roasted Spaghetti Squash, or mushrooms.  Sprinkle some atop a sour cream topped baked potato. Try it atop avocado toast.  Add it to rice, fried rice, pasta salad, potato salad, corn salad, salad dressing, or a marinade, including for tofu.

And with that, I’d say, double the recipe so you have it readily on hand for all of these ideas!  Note that while the recipes states the quantity as 2 tablespoons, it makes less – all of those pinches do not add up to 2-1/2 teaspoons.

This Old Bay Seasoning recipe made me feel like a chemist, creating the perfect harmony of aromas by weighing “pinches” and adding and stirring and sniffing (with caution, of course!). After mixing all the ingredients with a fork, I transferred them into a spice jar, rolled the spice jar to mix further, then transferred into a second spice jar, ensuring the even distribution of the spices.

To taste, I separated and licked a finger tip of this mix, then did the same with my fresh store-bought mix. The original Old Bay had a bit more vibrancy in the color but this recipe mix had more vibrancy in the flavor. You could taste the celery but the other spices were silent contributors to a well rounded, not quite the original Old Bay flavor, but very close and definitely not sporting the silicone dioxide included in the store-bought version.

My yield was only 1 1/2 tablespoons. I think the “pinch” measurement in the recipe still results in different amounts for different cooks. I used my “pinch” measuring spoon which is 1/16 of a teaspoon. When I weighed the different spices measured with this spoon I was getting 0.2 grams of each pinch of spice. In the spice world and in something with so many spices, even a discrepancy of 0.1-0.2 grams will alter the end result.

After I had made this recipe batch and tasted the result, I decided this seasoning would make a great gift for a couple of foodie friends. I made each batch separately and had the cardamom weigh in at only 0.1 grams the second time. This only confirmed my resolve to keep this recipe by weight only.

The verdict? My New Old Bay and I are still honeymooning. So far it has been sprinkled, steeped, and played the leading role. It graced all of my dishes for “feast of seven fishes.” The dishes all had a unique freshness and unique flavors so it didn’t seem the same spice was used in the cod carpaccio, coquilles St.Jacques, chawanmushi, bouillabaisse, rouille, and steamed clams. Looking forward to all the future sprinkles and spoonfuls!