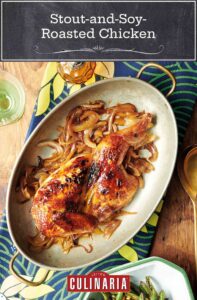 The secret to this tender stout and soy roasted chicken is the deeply flavored marinade made with soy sauce, stout beer, onions, and garlic. The chicken is then roasted atop onions until golden and crisp-skinned. Toss in an extra sheet pan of vegetables and potatoes and you’ve got a complete meal.

This is a version of the very first dish I learned how to cook on my own, when I was about twelve years old. When my mom left for work one morning, she realized she’d forgotten to marinate the chicken she’d pulled from the freezer to defrost the night before. Since she was going to be working especially late that evening, she called me before I left for school, full of instructions. She had me sprinkle salt on that chicken, pour a beer in a big plastic bag, stick the chicken in the bag along with some bay leaves and celery, and stand the bag in a bowl in the fridge to keep it upright.

When I got home from school, I was so proud of myself. I said, “I marinated this chicken, and now I’m going to cook it!” I had my dad turn on the oven for me, and I roasted that chicken, so it was ready by the time my mom returned from work. Of course, I’ve played with the rubs and marinades since then, but this is definitely the dish that started it all.–Adrienne Cheatham

What should I serve with this chicken?

To make this a one-pan meal, toss sliced mushrooms, halved Brussels sprouts, trimmed carrots, potatoes, or other smallish vegetables in a little oil and salt and add them to the sheet to roast along with the chicken.

Both tamari and soy sauce are made from fermenting soybeans. They are mostly interchangeable (but reader beware – soy sauce could be very overpowering in some recipes if swapped out for tamari 1:1. Definitely add a bit, and do a taste test). Tamari has a richer, deep soy flavor, whereas soy sauce tends to be thinner and saltier. They’re cousins. They’re both soy sauces, but tamari is the ‘dark’ soy sauce used in Japanese cuisine, while the type used in Chinese recipes (and likely what’s in your pantry) is considered the ‘light’ soy sauce. 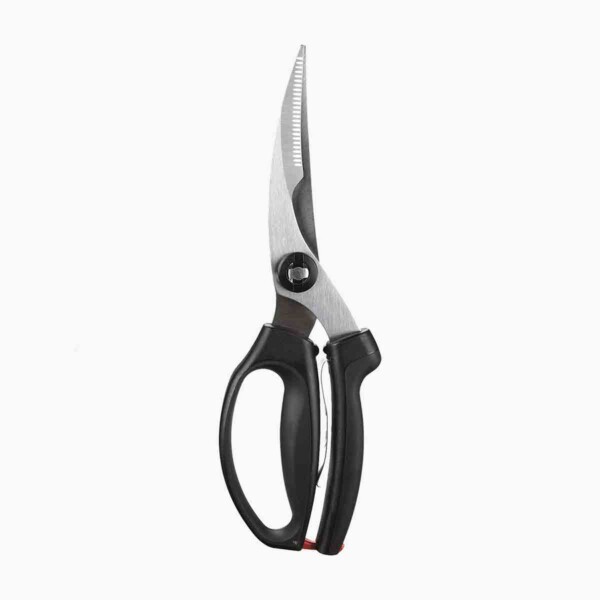 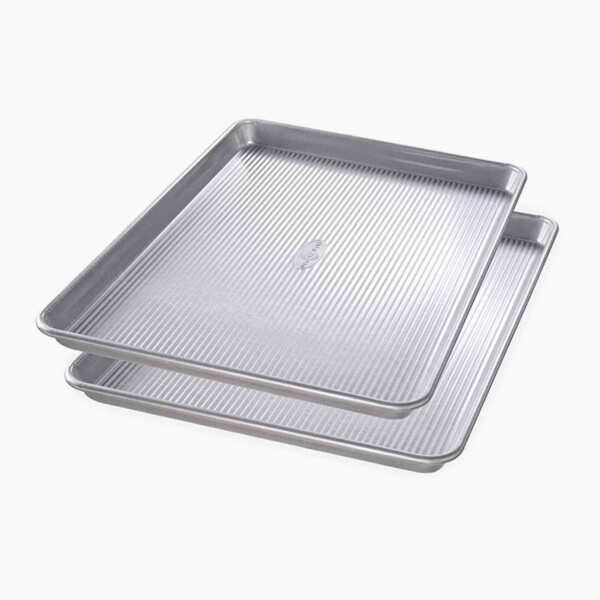 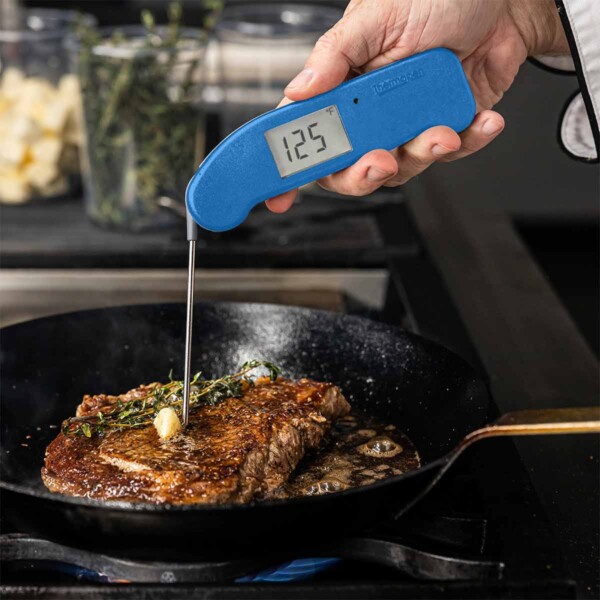 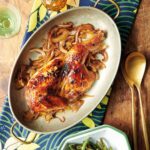 This is a version of the very first dish I learned how to cook on my own, when I was about twelve years old. When my mom left for work one morning, she realized she’d forgotten to marinate the chicken she’d pulled from the freezer to defrost the night before. She had me sprinkle salt on that chicken, pour a beer in a big plastic bag, stick the chicken in the bag along with some bay leaves and celery, and stand the bag in a bowl in the fridge to keep it upright.
Adrienne Cheatham
Prep 30 mins
Cook 45 mins
Total 3 hrs 15 mins
Entree
American
4 servings
478 kcal
5 from 1 vote
Print Recipe 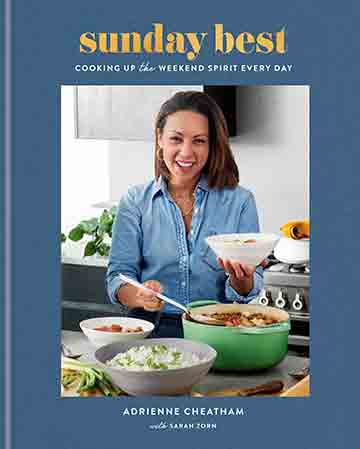 A perfect roast chicken recipe which requires no tweaking – straightforward to execute with excellent results and flavor. Layering the chicken, quasi-spatchcock style, on top of the onions with whatever roast worthy vegetables you have on hand (carrots in my case) makes for a perfect weeknight dish without having worked in the kitchen all day. The combination of soy sauce, beer and Worcestershire is so simple and thanks to butter rubbed on just before roasting rewards you with perfectly crisped skin and sweet subtle flavor.

I love an easy one pan chicken meal, but, only if the chicken has flavor. This stout and soy roasted chicken recipe hits all the notes for me. It is easy to cook, easy clean up and the chicken and veggies were loaded with flavor. It is a plan ahead meal as the chicken needs time to soak in all the marinade. The beer and soy add such an umami quality to the meal. The chicken was brined in the flavorful marinade and it added flavor to the vegetables as well. Having the oven at 450°F also got the skin nice and crispy. I may even try this with a turkey breast next time!

We are dealing with supply issues down here, so there weren’t any roasting chickens at the store. I did find a few Cornish hens languishing in the back, so I used those. Each hen was 2 lbs, total weight was 4 lbs. I marinated the chicken halves for 6 hours in a Ziploc bag placed in a large bowl and flipped it a few times during the day (easier clean up).

I had some fresh carrots from the market so I added them to the pan. Since my hens were smaller than a roaster, I cooked the 4 halves for 20 minutes, basted, then an additional 10. They were perfectly cooked at this point and the skin was super crispy. It was lovely to have the onions and carrots as a side in this one-pan meal. The next time I may throw in some potatoes to make it more substantial, but overall, this was delicious, pretty darned simple, and incredibly flavorful.

I absolutely loved this stout and soy roasted chicken. I mean really loved it. The flavor of the chicken and veggies is delicious, the marinade creates a very savory chicken with a lot of depth. My chicken was almost 5 lbs so it needed more time. I accidentally put both onions in the marinade and threw both marinated onion slices under the chicken along with apples and carrots to roast and had no problems by doing this. I’m definitely going to make this again.

I roast chickens often during the week. They are mostly hands off and a little upfront work goes a long way. I was super interested in trying this given the marinade (stout and soy?! I had to know) and I always roast the chicken whole which results in a long cook time, even at a high temp.

Ultimately, this checked all the boxes for me as far as a dinner goes:

I mean, that is a big fat win right there. Despite how straightforward it was, the final bird was juicy and flavorful and had such beautiful, crisp skin. I was thrilled I had rolled the dice and invited friends to join us for dinner, despite making a test recipe!

This is one of those recipes that fills the kitchen with wonderful aromas that get you really excited. And the end results deliver. The blending of creaminess from the stout, saltiness from the soy and sweetness from the onions is a winner. The dish was not complicated and very easy to put together (as the headnote would suggest).

I wish there was something to do with the marinade, especially the onions. Seemed a waste to throw them all away.

The recipe makes a nice, moist chicken that has a lot of good flavors. I roasted some carrots and Brussels sprouts, which turned out amazing.

We had a couple bottles of Guinness in the refrigerator. I don’t drink stout, and my pregnant wife can’t drink it, so this recipe was a great way to use up one of them. The other bottle will be used to make this dish again. The chicken was juicy and well-seasoned. The onions that the chicken rested upon during roasting were amazing! They were sweet, soft, and oh-so-flavorful.

The finished dish was very tasty. I worried initially that the stout and Worcestershire sauce would be aggressively present in the chicken, but they weren’t. There was just a deep, savory back note to the intense chicken flavor. The salt level was spot on. Honestly, it tasted like a grocery store or warehouse club rotisserie chicken but better. The onions were delicious, and the next time I make this dish—and I will—I will cut them thicker; I sliced them into about 1/3-inch rounds this time, but next time I will cut them about 1/2-inch thick. I will also put more of them on the baking sheet because they were so good!

Roast chicken doesn’t need a lot of extras to perform at its peak. Give it some love and care by enhancing its qualities and your eaters are rewarded. Even better, this dish was a pantry meal for me thanks to having Guinness on hand. Everything else is standard in a stocked fridge. With a little advance prep and strategic butchering of the backbone, the end result is savory, succulent, and decadent (oh the crispy skin!).

To complement the chicken’s marinade flavors, I added a sheet tray of roast cabbage and carrots. So good. I couldn’t stop eating the cabbage. To fully satisfy my big eaters, next time I plan on making double of everything!

This stout and soy roasted chicken was so tender and juicy! The skin was golden and crispy. There were only subtle notes of the marinade, which I liked. The white pepper is what stood out most to me and I think I will use black pepper next time. I may also cut up the chicken into quarters prior to roasting, only for ease of serving.

I served this with roasted broccoli, baby potatoes, and mushrooms. I didn’t have room on the tray with the chicken, so I roasted them separately. It also made sense to do so because 45 minutes at 450°F would have been way too long for those vegetables. This dinner was a hit with my family and I will be making it again soon.