This Kung Pao chicken is an easy, authentic Chinese dish made with crisp chicken breast, peanuts, and chile peppers in a sauce made from soy sauce, black vinegar, and sesame oil.

Kung Pao chicken, for those who’ve only ever seen it on Chinese menus and not ordered it, consists of a lightly sweet-and-sour sauce infused with the complexity (and slightly lip-tingling qualities) of Sichuan peppercorns. The tastes and the textures are all different yet extraordinarily complementary in that balanced yin and yang sorta way, to say nothing of the dish’s impressive appearance when served straight from the wok.–David Leite

How to pronounce Kung Pao chicken

Curious how to properly pronounce the classic Chinese dish you’re about to make? We certainly were. In seeking the pronunciation, we came to find that Kung Pao is sorta the Americanized slang for Gong Bao chicken, which is actually short for Gong Bao Ji Ding. Here’s its proper pronunciation. (Say again? We had to listen several times to nail it, so don’t feel bad if you don’t get it on the first try.)

Interested to learn more about the history of this dish? Author Fuschia Dunlop explains:

“This dish has the curious distinction of having been labeled as politically incorrect during the Chinese Cultural Revolution. It’s named after a late Qing Dynasty (late 19th century) governor of Sichuan, Ding Baozhen—Gong Bao was his official title—who is said to have particularly enjoyed eating it.

“No one can quite agree on the details of the dish’s origins: Some say it was a dish Ding Baozhen brought with him from his home province of Guizhou; others that he ate it in a modest restaurant when he went out in humble dress to observe the real lives of his subjects; still others, rather implausibly, that his chef invented the finely chopped chicken dish because Ding Baozhen had bad teeth.

“Whatever the truth of its origins, its association with an imperial bureaucrat was enough to provoke the wrath of the Cultural Revolution radicals, and it was renamed ‘fast-fried chicken cubes’ (hong bao ji ding) or ‘chicken cubes with seared chiles’ (hu la ji ding) until its political rehabilitation in the 1980s.” 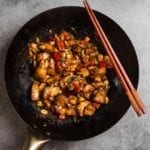 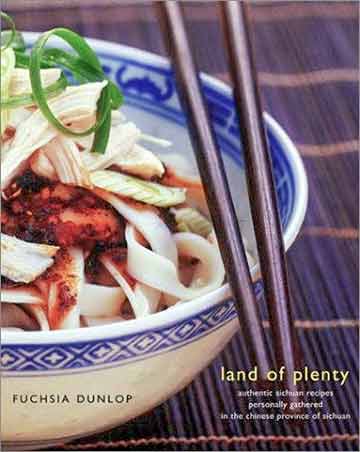 For the Kung Pao chicken

Kung Pao Shrimp Or Pork You can substitute prawns (shrimp) or chunks of pork in place of the chicken. Kung Pao Chicken With Cashews Cashews can be used instead of the traditional peanuts for a slightly more grand-seeming version of this dish. Kung Pao Chicken With Whatever’s In Your Fridge We love this Kung Pao chicken recipe without changing a thing. However, if you’re the sort who prefers a little extra vegetable to make you feel a little more virtuous after having cold cereal for dinner last night, or if you happen to have some vegetables languishing in the fridge or canned items in the back of the pantry that you know you won’t use if they linger any longer, then go ahead and toss them in. Red bell peppers, water chestnuts, even asparagus, they all work here. Follow your bliss.

Call it laziness. Call it downright knee-shaking fear. I've studiously avoided cooking Chinese dishes in my home ever since...well, forever. After all, I do live in New York City, even though I deign to stay there only a few days a month. And that means delivery. All I have to do is pick up the phone and in less time than it takes for someone else to get fanged on "True Blood," I have all the Chinese food I could possible want.

But a curious thing happened on the way to MenuPages.com. I've either become a better cook or Chinese takeout has gotten worse on the Upper West Side. I think it's probably the latter, as friends who don't even cook think the food has tanked. And that has left a gaping hole in my cravings. I was waving 再见 (goodbye) to cold sesame noodles, pork buns, hot and sour soup, General Tso's Chicken, beef and broccoli, egg foo young, and Gong Bao (aka Kung Pao) chicken. Out of sheer desperation, I manned up to the wok, placed a huge order with Amazon.com for ingredients, and went for it.

This Gong Bao chicken is the first dish I made from the formidable writer and Chinese culinary expert Fushia Dunlop. In fact, it's the first Chinese recipe I've ever made. And it worked perfectly out of the (takeout) box, so to speak. It smacked of the flavors I so love, but without all that gloppiness attendant with takeout Chinese.

Now, as you know, The One doesn't like spicy foods (yes, yes, a problem), and I know this recipe has been described as being so hot it approaches the "hiccup threshold." So I cut back on the peppers (I didn't use Sichuan peppers but rather substituted piri-piri peppers) to great effect. It all came together in no time--even the prep work, which can be daunting in Chinese cooking--was a breeze. I had everything ready before The One came home to Connecticut. When he walked in, I just revved up the skillet and started. Ten minutes later we were seated at the dining room table. The only thing I'd do differently next time would be to use a nonstick pan. I don't own a traditional wok (although I'm now eyeing them) and the sauce began to stick to the skillet due to the sugar. Beyond that, it was flawless.

Gong Bao chicken has succeeded in toppling spaghetti alla carbonara as my top a go-to weeknight dish (sorry, Italy). We loved it so much, we're serving it to guests this week. Now all I have to do is learn to speak Chinese (see the "How To Pronounce Kung Pao Chicken" note above) and I'll be set.

This Kung Pao Chicken is just like what’s on the menu at my favorite Szechuan restaurant. Rich, complex, not ridiculously spicy, and a perfect consistency for the sauce. Some of the ingredients aren’t standard issue in most American kitchens, but any reasonable Asian market should be able to help you out.

I was careful to remove most, if not all of the seeds from my dried chiles, as my wife doesn’t like things too hot. The “ma la” tongue-tingling sensation was just right; I think if the Szechuan peppercorns had been ground, it would have been out of control. Also, keeping the peppercorns whole and the dried chiles in larger pieces allows the heat-averse to pick around them.

As with many stir-fry recipes, it’s more work to prep than to cook, but this could easily be done on a weeknight once you have the specialty ingredients.

This Kung Pao chicken is a very flavorful dish that was a wonderful treat for a weekday meal. I used Guajillo peppers that gave a delicious flavor but weren’t too hot. The peanuts work well with the complex flavors of the different kinds of soy sauce, the rice vinegar, and the sesame oil.