This root beer-glazed ham is made with a glaze of root beer, ketchup, brown sugar, and mustard for an easy yet impressive main course. Don’t knock it until you’ve tried it.

Root beer-glazed ham. No, it’s not a carryover from your childhood. It’s a perfectly brilliant recipe in its own right given how, as author Martha Hall Foose explains, it’s made from “Sassafras roots and bark, dandelion, wild cherry, burdock, spruce, wintergreen, ginger, nutmeg, cloves, and anise are flavorings found in root beers, and all make a wonderful enhancement to smoky ham.”–Martha Hall Foose 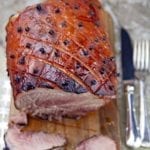 This root beer-glazed ham is made with a glaze of root beer, ketchup, brown sugar, and mustard for an easy yet impressive main course. Don’t knock it until you’ve tried it.
Prep 30 mins
Cook 4 hrs
Total 4 hrs 30 mins
Mains
Southern
8 to 10 servings
434 kcal
5 / 3 votes
Print Recipe 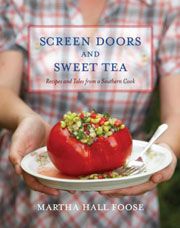 For the root beer glaze

This glaze was AMAZING! It wasn’t too sweet but just absolutely perfect. Usually ham glazes overpower you with clove, but this one had just the perfect amount. The balance of the seasonings to the sweetness of the root beer was fantastic. And so ridiculously easy—just add the ingredients and simmer!

The glaze is also very versatile and doesn’t have to just be for ham. I used it on pork tenderloin, which I coated in grill seasoning and browned and then finished off in the oven with the glaze and that came out amazing, too!

The root beer-glazed ham recipe yields a glazed ham that’s a little spicy, a little sweet, and a little pungent from the mustard. Definitely a winner.

Strangely, I’ve never really made a ham before, but I was cooking a simple buffet lunch and this recipe looked intriguing. I bought a 3 1/2-pound, bone-in, smoked shoulder ham and cooked it exactly as directed, although I basted it more often with the yummy root beer glaze. The amount of glaze is rather overwhelming, so I would halve it next time for a ham this size.

I really enjoyed this ham glazed with root beer. I used a pork shoulder or pork butt, or, as we call it in the Midwest, a cottage ham. The rich scent of cloves and ham will take you instantly back to your grandmother’s house. Not a bad way to spend a Sunday afternoon!

The root beer glaze is wonderful, although I wouldn’t bother saving the drippings for the sauce, as I found it thinned the glaze a bit too much and altered the flavor as well. I also brushed the glaze on the ham a couple extra times at about 10-minute intervals, which produced a nice, thick, caramel coating.

This is an easy prep, easy cook recipe for a Sunday or Saturday dinner. It’s sweet, savory, just the right amount of salty, and addictive!

I used cheesecloth to place the spices in, making it very easy to remove them from the glaze mixture. This recipe will be your next crowd pleasure! Enjoy!