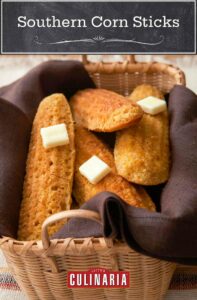 Southern corn sticks are commonplace in the South and once you try this recipe, you’ll see why. Buttery, crispy, and just a little bit sweet, they’ll either bring back happy memories or introduce you to something you never knew you missed.

Corn sticks were a big part of my childhood. When I was growing up, we often had dinner at Morrison’s Cafeteria. My favorite part of the outing was reaching the end of the line where the hot corn sticks were served. They were crisp on the outside, soft on the inside, and topped with pats of butter that melted over them. The cafeteria is long gone, but not the corn sticks. They survive in this recipe.–Elinor Klivans

We know. You’re thinking, “I don’t have a corn stick pan and I’m not going to buy one.” Yet part of what makes this corn stick recipe from baker Elinor Klivans so spectacular, as she explains above, is the lovely old-fashioned cast-iron pan in which it’s baked. The batter just doesn’t actualize its fullest potential when made in a baking dish or muffin tins. (Though we’ve been told by Southerners that, in a pinch, a madeleine pan turns out not at all shabby, albeit rather squat, corn sticks.)

What do we think is a shame? That the darn pan affords only seven corn sticks. How often do you have seven people at your table? What happens if you’ve invited six guests? It could get not so pretty if anyone finds out there’s a single, lonely leftover corn stick hanging out in the kitchen. Or, heaven forbid, what if you’re expecting eight?! It’s far beyond the normal call of host or hostessing to ask us to do without one of these little lovelies. It’s a problem that’s easily remedied, though. Simply double the recipe and make the corn sticks in batches. Or invest in a second pan. Trust us.

CAN I MAKE CORN STICKS AHEAD OF TIME?

You might think that these gorgeous little morsels are only good as soon as they’re pulled from the pan. Luckily, you can make them ahead of time–meaning, you can make a LOT more than 7. The corn sticks can be baked a day ahead, covered, and left at room temperature. To serve, preheat the oven to 275ºF (135°C) and reheat the corn sticks, uncovered, just until warmed through, about 10 minutes. Simple and solves the problem of odd-numbered sticks, right? 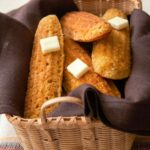 Corn sticks call for baking the batter in a hot, well-greased pan with long, narrow corn-shaped wells, which is what produces the crisp exterior. Southerners pass well-seasoned pans from generation to generation; you can also find them in most cookware stores. Traditional pans are made of cast iron and usually have seven wells.
Prep 15 mins
Cook 20 mins
Total 35 mins
Sides
Southern
7 servings
128 kcal
4.93 / 14 votes
Print Recipe 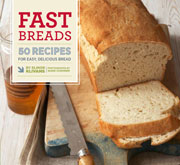 I jumped at the chance to test this recipe if only to have a good excuse to pull out my corn stick pans. I was raised on corn sticks, so they’re comfort food for me. This version baked perfectly and was light and delicate. The recipe calls for a higher proportion of flour and more sugar than the corn sticks I grew up on, so they’re just a tad sweet for my taste, but I’d call this a good compromise for those who want to try a Southern cornbread but want something with a bit of sweetness.

One thing I did slightly differently than in the instructions: I heated the corn stick pan in the oven before brushing on the melted butter. I brushed the butter on the hot molds just before filling them with batter.

I grew up in Florida and remember eating at Morrison’s Cafeteria. Of course, it was many years ago, but these corn sticks taste just as I remember them from Morrison’s. Are they really that delicious, or are they enhanced by the memories they brought back for me? I side with the former; these really are that delicious.

The recipe is straightforward and easy. The corn sticks, hot out of the oven with butter melting over them, were definitely worthy of the highest Testers Choice distinction.

I’m a Southern girl who grew up on sweet cornbread. Just like the recipe mentions, my corn stick pan has been handed down from generation to generation.

This recipe was very quick and easy to prepare. The batter was ready in the same amount of time it took my pan to heat, and the baking time was just as the recipe stated. The result was a perfect corn stick that came out of the pan with a slight prod from the toothpick I tested it with.

I see a trip to the store in my future to get more pans so I can feed the crew when everyone is here. The corn sticks had a well-balanced corn flavor that would be perfect for any chili, soup, or pot of pinto beans.

These are wonderful. The only thing I’d do differently next time is to omit the sugar. I just don’t think cornbread needs sugar, but that’s a Southern taste preference of mine. I love using my cast-iron corn stick pan, and it made these just as promised: crunchy on the outside and tender on the inside.

The baking time was right on the mark. My grandma taught me to preheat the cast-iron skillet with melted butter for the best cornbread, and it was nice to see this tip in this recipe.

I loved that these were so tender and crispy. I couldn’t find my corn stick pan (and believe me, I looked and looked), so I whipped out the cast-iron skillet and put it in the hot oven with the butter and batter.

I’ll use this recipe again for sure. We had a Morrison’s Cafeteria in our town, too. There were many times I’d go and enjoy just about everything there. Thanks for the memory, Elinor!