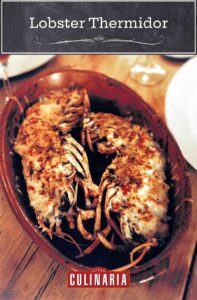 Lobster thermidor is a luxe French dish that consists of lobster meat, cooked in a rich wine sauce. Presented by placing the meat back in the original shells and broiling the cheese until bubbling, it will also knock the socks off your guests.

Ideally, the lobster flesh, smothered in the finished sauce, is piled back into the two half-shells and finished under the broiler. If you should happen to make a mess of splitting the lobster (I often do) and thereby spoil the shell, you can pile the lobster thermidor filling into one or two individual ovenproof dishes. It may look slightly less spectacular, but it will taste every bit as good. Most recipes stipulate heavy cream for the sauce, but I find it almost too rich, so I prefer to use béchamel sauce.–Hugh Fearnley-Whittingstall

How do I buy a lobster?

First, always remember that lobsters can only live for about 48 hours after they’ve been removed from saltwater so buy them as close to serving time as possible. When choosing, look for the ones that are the most lively and have all of their legs, claws, and intact shells. If you have to move the lobsters, pick them up by their body, not claw or tail—especially if it’s still alive.

Okay, now I’ve got it home. How do I store my lobster?

As soon as you get your lobsters home, put them in the refrigerator to keep them cold. Don’t store them in tap water, just put them in a paper bag. In this recipe, Fearnley-Whittingstall suggests putting them into the freezer for about 2 hours before cooking to put them into torpor, which is his preferred method. Don’t store them in the freezer for much longer, though, or they’ll freeze. If you’d rather use the boiling water method to the freezer method, feel free to do that instead–some people feel that it’s preferable for both you and the lobster.

How do I know when my lobster is cooked?

Like a lot of things in life, timing is everything. Take note of the timing when the water returns to the boil again after you add your lobster to the pot. Note that some lobsters, especially larger ones, will turn bright red before they’re cooked through, so don’t use that as your only way to gauge if it’s ready. Lobster meat needs to be fully opaque to be ready. 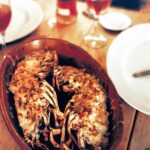 This lobster thermidor is a classic dish and an unbeatable one. One good-sized lobster serves two people to make one of the finest special-occasion dishes I can think of.
Prep 40 mins
Cook 1 hr
Total 1 hr 40 mins
Mains
American
2 servings
360 kcal
5 from 1 vote
Print Recipe 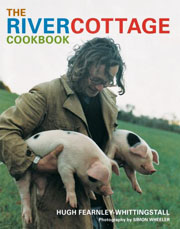