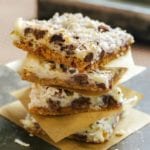 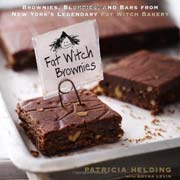 I made this recipe twice, and both times, the pans were devoured in no time. My 11-year-old great-niece helped me the second time I made them, and she thought they were fun to make and delicious to eat. Our tasters couldn’t wait for them to completely cool to cut them.

I used an 8-by-8 pan, which worked fine. I did have a little problem the first time as I used the whole stick of butter with the graham cracker crumbs. The crust turned out a bit looser on the bottom, but still delicious. Also, if you let the baked crust sit for about 5 minutes, it’s much easier to spread the topping on.

With the first batch, I sprayed the pan with floured baking spray. The second time around, I buttered and floured the pan. The results were much better the second time.

One could even make a triple batch and use two cans of sweetened condensed milk and not have any left over.

We loved these bars. I’ve traditionally made these with eggs, but the condensed milk works fine, resulting in denser congo bars.

The recipe called for 11 whole crackers to make 1 cup of crumbs, but I had a lot of crumbs left over, so next time I’d start with 6 whole crackers. Also, I didn’t think having semisweet and milk chocolate chips made a difference tastewise. But overall, the Congo bars were sweet, with a hint of salt, chew, and crunch—we ate them all!

This recipe was easy to make, and was a hit with my friends. I also added white chocolate and butterscotch chips to the mix.

I served these at a party so I cut them smaller than suggested and got 25 squares. Given how rich these were, the smaller size worked well. Though really, it wouldn’t have mattered what size they were—people literally could not stop eating them.

The only thing I’d change about this recipe—aside from maybe adding a few more chocolate chips—are the directions for adding the butter to the graham cracker crumbs. Even softened, the butter was difficult to combine with the crumbs. Instead of using the fork the recipe called for, I used my hands, which was much more effective. I think you could melt the butter and still get the same result. I used unsweetened shredded coconut instead of sweetened, and it worked well.

These were delicious! I don’t like coconut, milk chocolate, or sweetened condensed milk, but I’m a sucker for a graham cracker crust. So, I made the recipe in order to use some homemade graham crackers. What a pleasant surprise! All of the ingredients I normally don’t like melded beautifully together. There was also a healthy dose of salt in the crust that perfectly balanced the abundance of sweetness in the coconut mixture.

The recipe says to cut them when they’re completely cool, which, I almost learned the hard way, is a necessity. Until they’re totally cool, they’re not completely set. I’d also like to make them next time in an 8-by-8-inch pan, for a thicker bar.

This is a wonderful recipe! I make seven-layer bars every year at Christmas, and these Congo Bars will definitely replace them from now on. Baking the crust before adding the toppings and baking for a second time, really makes a huge difference. It gives the bars almost a cheesecake-esque crust that’s delicious.

We’ve always loved these bars. I made 2 different batches, one with pecans and the other sans nuts. I guess things don’t change much over time, because when my children were little, the adults liked the ones with nuts and the kids liked them without—and it’s the same case now.

These bars are very easy to put together, and baked in the exact amount of time stated in the recipe. The hardest part was letting them cool enough to cut and eat! I’d like to make them again using hazelnuts. Now, if they only made Nutella-flavored chips.