Doughnut pudding is much like bread pudding except for the obvious difference–it’s full of doughnuts instead of just regular bread. How’s that for fabulous? Flavored with rum, cinnamon, and vanilla, then topped with icing, you can’t beat it.

If you’re a bread pudding fan, nothing tops a slice of doughnut pudding—except, perhaps, a drizzle of icing or a scoop of ice cream. Because some of bread pudding’s typical ingredients are already right in the doughnuts, this dessert is quick to make.–Jess Thomson

We’re at a loss for words, we’re so agog over the magnificence inherent in this creation. It’s all we can do to gather our wits and grab a spoon. And it just goes to show that when life hands you too many doughnuts—yes, such a thing is possible—all you need to do is make pudding. Doughnut pudding. 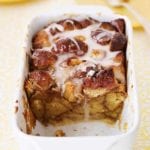 Doughnut pudding is the most comforting dessert you can imagine. Warm, sweet, and flavored with rum, it's always a big hit. It's like bread pudding but even better.
Prep 5 mins
Cook 1 hr 5 mins
Total 1 hr 10 mins
Dessert
American
6 servings
337 kcal
4.86 / 7 votes
Print Recipe 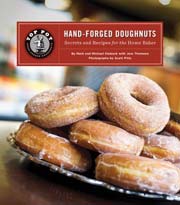 Nancy, one of my taste testers, summed up the deliciousness by sharing between mouthfuls, “I don’t even like bread pudding, but I like that…it melts in your mouth.” This recipe worked perfectly as written. I used one apple fritter and two raised glazed doughnuts, purchased at one of Chicago’s best doughnut shops, Huck Finn. It was worth the trip—no question about it, the quality of the doughnuts counts here. Note that the introduction specifies day-old doughnuts. It’s important that they be stale for the best, most thorough soak in the rich liquid. And the soaking should be complete! The top pieces need to be completely mixed with the bottom ones. The yumminess of the resulting pudding relies on the doughnut pieces being warm and soft, not at all crisp or crunchy. The directions state to bake until firm and browned on top, and the timing was spot-on at the full 50 minutes. The pudding was firm in the center, but not really very browned. I cooled for the specified 10 minutes and made the icing while waiting. The icing did harden up a bit when it sat for just a few minutes, and I added a little extra hot water to thin it out. The pudding would’ve been fine without the icing, yet it was also fine with it. None of my testers found the suggestion of topping with a scoop of ice cream at all appealing. We really liked the apples in the apple fritter, and no one missed the rum/rum extract that I passed on. I did use the whole milk and heavy cream combo as specified, but it would still be equally—well, almost equally, rich—with the dairy fat taken down a notch, such as all whole milk, or even a combination of whole and 2 percent milk.

This is an easy recipe to make and it delivers on taste. I would suggest baking it a little longer than the time indicated in the recipe. I baked the pudding for the 50 minutes as stated in the recipe, and it was golden and set. However, I thought it was much better the second day when I reheated it in the oven. The icing knocked it out of the park. I have never had nor baked a bread pudding in a loaf pan. I’m not sure that I can overcome my history of bread pudding and how it is supposed to look! Well, I can if I work at it. I guess a few more times making the recipe will seal the deal!