When Domenica Marchetti says this giant ravioli is big, she means it. This riff on the raviolone from the Valle Scannese farm is a stunning meal that is easy to make than it seems. Filled with fresh cheese and finished with a simple tomato sauce, it’s a showstopper.

Adapted from Domenica Marchetti | The Glorious Pasta of Italy | Chronicle, 2011

I dislike big food. It’s a turnoff to me. I have no desire to be supersized or doubled-down, and I refuse to let my kids partake of food that’s defined more by volume than flavor. You won’t find any of us chowing down on a bucket of popcorn at the movie theater or slurping a Big Gulp or a venti or trenta or quaranta or however many ounces we’ve worked our way up to these days.

Yet, somehow, I managed to fall in love with a giant raviolo.

In my defense, I was in Italy, where it’s possible to fall in love with anything from a lone umbrella pine perched on a hillside to the 95-year-old toothless contadina who sells perfect baby zucchini with the blossoms still attached. At the time, I happened to be in a place of rugged, unspoiled beauty: an organic caseficio (cheese farm) in Abruzzo.

The cheese maker, a large man named Gregorio Rotolo, who’s as renowned for his distinctive sheep’s milk cheeses as he is for the black woolen beanie he perpetually sports, gave my husband, my kids, and me a tour of the place and a taste of his warm ricotta, made just that morning and still draining in baskets. For a minute I thought maybe the Rapture really had come and I’d been called up. But then I opened my eyes and spied tables in the room adjacent to the cheese shop. Turns out the farm also runs a family-style restaurant. My husband and I looked at each other. We weren’t going anywhere for at least a couple of hours. The kids rolled their eyes in resignation.

Listed casually on the menu was Raviolone. Big raviolo. Big deal. More like big gimmick, I thought. We almost didn’t order it, but my curiosity kicked in. I was, after all, writing a book on the pastas of Italy. I was expecting a plate of oversized half-moons, each maybe the size of an espresso saucer. But what arrived on a platter put my imagination to shame. It was, indeed, one raviolo, as written on the menu. A single raviolo that was nearly a foot long. As big as a bistecca or a pounded veal cutlet. It was shaped like a perfect half-moon, with a fluted border, and dressed simply, with just a little tomato sauce and a shower of cheese. It was filled with the farm’s same fresh ricotta we’d just swooned over.

The four of us marveled at it; then we divided and devoured it. The pasta was silky and tender and the ricotta filling fresh and sweet. It was outrageous and yet, at the same time, understated. It seemed, suddenly, the most natural thing to find on the menu at this restaurant tucked in these hills. Of course there existed such a wonderful form of ravioli. This was Italy.

I knew right then at the table that I’d try to re-create this marvel at home. But it wasn’t until I got back to my kitchen in Virginia that I actually considered the logistics. How in the world would I assemble such a large raviolo? How much filling would I need? How would I boil it? And once it was cooked, how would I get it out of the water in one piece?

I wish, for dramatic effect, that I could tell you it took a heroic effort on my part to master this pasta project, that I went through batch after batch of dough and tubs of ricotta, that there was failure and frustration before there was success.

But the truth is, instead of being ridiculously difficult, it was almost easy. Okay, maybe it was a little unwieldy the first one or two times, but definitely not the daunting task that I’d anticipated. Getting the thing out of the pot proved to be the biggest challenge, and even that can be accomplished with relative ease thanks to a very large skimmer.

When I cook ravioloni for my family, as I often do, I make one for each of us. It sounds downright…piggish. But when you consider that a pound of pasta dough yields just enough to make four ravioloni, it’s really no different than if I made lots of small ravioli or just cooked a pound of dried pasta.

Plus, no matter how crazy or cruddy the day has been, somehow sitting down to a dinner of giant ravioli has a way of transporting us from our everyday lives in suburban northern Virginia right back to Abruzzo—and my realization that, yes, sometimes bigger is better.–Domenica Marchetti

Domenica tells us you can make eight smaller ravioloni for serving as a first course to eight people by dividing the filling and dough into eight equal portions rather than four. You could. But why would you? 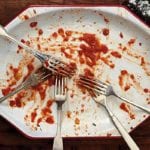 This giant ravioli, made after I tasted the ravioloni from the Valle Scannese restaurant, is something that I serve to family often. Filled with fresh cheese and finished with a simple tomato sauce, it's both simple and elegant.
Domenica Marchetti
Prep 45 mins
Cook 30 mins
Total 1 hr 15 mins
Mains
Italian
4 servings
309 kcal
5 / 2 votes
Print Recipe 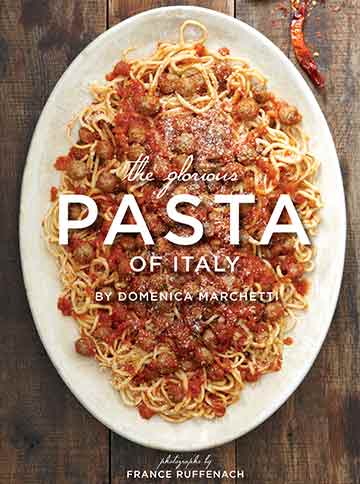 For assembling the giant ravioli

The filling is very subtle and good. If any of you are able to find fresh whole–milk ricotta cheese, made by Calabro, a company in East Haven, CT., do yourself a favor and buy it. This particular ricotta comes in a tin that resembles a small planter pot. The tin holds 1 1/2 pounds and comes domed over the top (like you would get with an ice cream cone) and covered with plastic.

The ravioloni are filling, but also rather light fare, considering their size. The cheeses inside and the simple tomato sauce over it all really need only a few shavings of Parmigiano-Reggiano to complete the meal. Well, perhaps a nice Chianti to sip alongside.

Large spatula(s) and careful attention will be required when removing the ravioloni from the pot or they may break. I merely paused for a few seconds, hovering each piece over the pot while the few drips fell back into the simmering water, before placing it on a warmed plate. I let the cow’s milk ricotta sit overnight to drain. Good thing, because the filling was soft enough when I finished mixing it. I got about 1/2 cup of liquid out of the ricotta. I think some types may have more liquid than others.

I couldn’t get the ravioloni any larger than about 9-inches, nor would I want to. And you need to start early in the day to make this, or pace it over a few days. I made the sauce, the dough, and the filling one day. Then rolled out the pasta dough, made the ravioloni, and reheated the sauce the second day.