This Catalan bread salad, also known as escalivada in its native Spain, is a rustic summer staple made with day-old bread and grilled or roasted vegetables including tomatoes, eggplant, zucchini, bell peppers, and (surprise!) figs. Spain’s answer to panzanella.

This escalivada salad takes its intriguing name from the Spanish term for cooking over hot coals as the vegetables in it, unlike in Italian bread salad, are grilled. They’re then smothered with a rich, garlicky, umami-heavy dressing called anchoïade that you’re gonna wanna slather on EVERYTHING. Despite the resulting garlic breath. Swear.–Renee Schettler Rossi 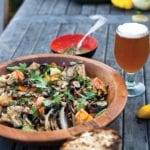 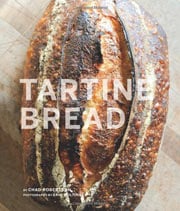 For the bread salad

What You Need To Know About Making This Salad

How To Make It With Roasted Vegetables You can easily swap the grilling for roasting if you’re apartment-bound or craving this salad during winter, simply roast the vegetables rather than grill them using your preferred technique. Really any temperature oven will work, whether you go low and slow or a higher temperature for a shorter amount of time. How To Pronounce A Couple Unfamiliar Terms Not all of us are accustomed to bandying about terms such as bagna cauda and anchoïade and escalavida. Nor are we accustomed to tossing together a lovely deconstructed bread salad. That doesn’t mean both of those things can’t happen with ease. Here, a cheat sheet… Bagna cauda (pronounced BAN-ya-COW dah) is pretty much just as described in the above headnote. It’s often used as a fondue of sorts for meat or raw veggies or a vinaigrette to accompany robust flavors. Anchoïade (pronounced on-SHWOY-ahd) is a garlic and—you guessed it—anchovy dip that takes countless guises. This version is more embellished than most, an intriguing juxtaposition of bitter and sweet that’s earthy and enticing. Any questions?

This recipe is delicious and very versatile. It’s salty and sweet, creamy and crunchy, and quick to whip up if you make the sauce while the vegetables are grilling. I typically don’t like anchovies and was worried that the anchoïade would impart a strong fishy flavor to the dish, but the addition of the anchovies instead added a rich saltiness. The dressing was so flavorful that it could be used on any number of vegetable or grain salads with great results.

I didn’t have a mortar and pestle on hand and instead prepared the anchoïade in a food processor. I’m assuming that the result was a smoother sauce than was intended, but it was still delicious and took only 30 seconds to make.

I made a modified version the following day, preparing it as more of a salad with the vegetables sliced smaller and roasted instead of grilled, the bread cut into croutons, and everything tossed together with the anchoïade. I served it with a dollop of ricotta cheese and it was wonderful.

A fabulous combination of flavors and textures, this grilled vegetable bread salad hits the mark. Delicious with or without the yummy anchoiade, it’s certainly a dish you will wish to add to your culinary repertoire. However, the anchoiade is good enough to eat by itself, it’s that addicting.

After grilling the vegetables, I chose to cut them into smaller pieces for serving.

My tasters really enjoyed this recipe and I liked the ease of preparation. They especially liked the play of the anchoiade texture against the softened grilled vegetables. It’s a delicious sauce that’s both salty and sweet, and it was easy to prepare as I had all the ingredients on hand, including vegetables from my garden.

I have one minor criticism. The author used this rich sauce over the vegetables, which didn’t allow their taste to come through as the sauce is very thick. I thought it was wonderful spread on the grilled bread instead. We will definitely be using this recipe again.

The star of this escalavada is the anchoiade. There seems to be as many variations of the French anchoiade as there is for, let’s say, an American barbecue sauce. The most notable difference I found in this recipe was the addition of Mission figs. It’s a very unexpected sweetness in contrast to the umami one would experience in common anchoiade preparations.

I took the recommended route of using a mortar and pestle. Choosing whether to use your food processor or the mortar is not wholly a matter of convenience, but a matter of choosing the texture and consistency you prefer. My version with the mortar was a rough paste with the walnuts bulking up the texture. If you like condiments of this nature smoother, with little to no discernable nut pieces, opt to create the paste in the processor with the exception of course that all of the herbs and figs should be added by hand at the end.

I was intrigued by the anchoiade in this recipe. The grilled veggies were standard fare, but I hadn’t had that combination of ingredients as a dressing. It was intensely flavorful—the lemon zest and juice added freshness, the walnuts were great for texture, and the sweetness of the figs rounded out the experience. I have to admit that I omitted the anchovies (I just really don’t like them).

While the large slices of vegetables look lovely on the plate, they take cutting and mixing in order to become more of a bread “salad”. I actually spread the bread slices with the anchoiade and layered the veggies on top. Delicious!

This was a bit labor intensive but has a lot going for it. This is an excellent recipe for company. Folks were really impressed with all of the textures and flavors. The anchoiade was jam-packed with vibrant flavors.

It did take a while to grill all of the vegetables, as we had to do grill them in 3 separate batches. Another issue was that after a while, the extra anchoiade we had on hand from the recipe became tiresome. We didn’t really want much of it with the leftover vegetables.