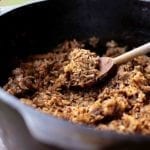 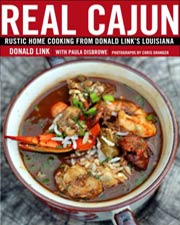 This, my friends, is as good a jambalaya as I’ve had. The recipe is an afternoon project, and I assure you, it’s worth every minute. When I made this, I had hopes of taking it to work for my buddies a couple of days later…a nice thought, but it was so good, of course it never made it out of my house.

I’ve never had jambalaya before, so I have nothing to compare this recipe with as to its authenticity, but the taste was stupendous. The spice mix is what I think really makes this dish shine. Along with everything else, it produces a wonderful multitude of rich, hearty, comforting flavors and textures that left everyone sated.

This chicken and sausage jambalaya recipe requires a fair amount of preparation and work, but it’s worth the effort. I used a store-bought rotisserie chicken for simplicity and a chicken andouille sausage instead of pork. I don’t care for green peppers, so I added yellow instead. And I made an addition, which I don’t think is traditional, of peas at the end of cooking, just because I cannot seem to have rice dishes without peas. I will make this again, most certainly as a fall and winter dish, and for any potluck I attend.

The layers of flavor created by the continual cooking down of the liquid in this chicken and sausage jambalaya are amazing. The house smelled really good. This is quite an involved recipe. Also, the spice mix is very “hot,” so you may need to make an adjustment if you have children eating this dish.