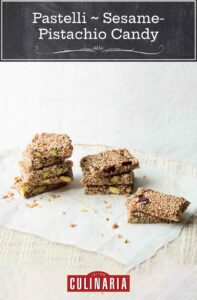 Sesame, pistachio, and honey candy are a homemade version of those sweetly, seedy snacks from your childhood. Or, if you’re lucky enough, from your last trip to Greece. 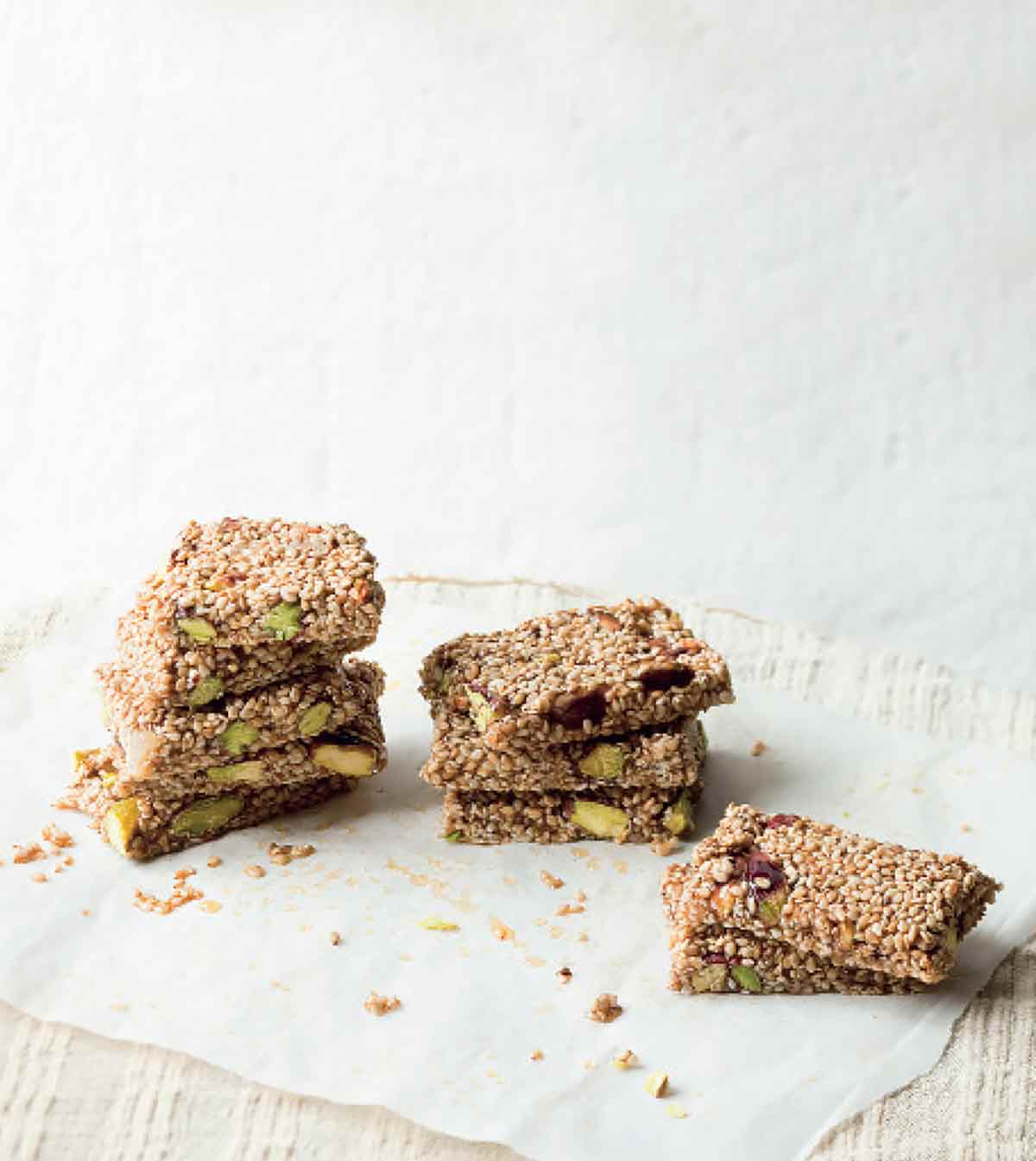 This pastelli recipe is a very good, nutritious, sweet snack. In the good old days it was seen as a good thing, an extravagance, along the lines of ‘‘Finish your food and you can have a piece of pastelli.’’ I love it with the pistachio nuts that the island of Aegina is so well known for. It’s very easy to make yourself, and the amount can easily be doubled.–Tessa Kiros 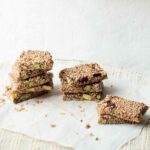 In the good old days it was seen as a good thing, an extravagance—‘‘finish your food and you can have a piece of pastelli.’’ I love it with the pistachio nuts that the island of Aegina is so well known for.
Prep 10 mins
Cook 10 mins
Total 20 mins
Dessert
Greek
30 squares
44 kcal
4.72 / 7 votes
Print Recipe 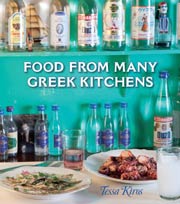 *Can I use black sesame seeds in my pastelli?

Black and white sesame seeds come from the same place—white is simply the seed with the hull removed. But that doesn’t mean that they’re strictly interchangeable. The hull is sorta bitter, so black sesame seeds are generally used with other ingredients that can stand up to the flavor. They do make a striking garnish so a sprinkle wouldn’t go amiss, here.

Simple, straightforward, and satisfying, these little squares make an ideal snack or light dessert; they’re almost like Greek granola bars. They’re also incredibly quick and easy to make – if you can turn on a stove, you can make them. The only tricky part is turning them out of the skillet and shaping them into a rectangle.

Because they’re quite sticky, they’re difficult to handle. I found that turning the mixture onto a Silpat worked very well and that letting them cool for less than a minute made them easier to shape. I’d also recommend using your hands to shape them instead of a spoon or spatula – both get too sticky to be of much use.

I made this three times in the last week, each time making small changes, but each batch disappeared very quickly. The directions say to toast the seeds and nuts lightly. The first time, I toasted them for a little longer than I should have, trying to get a pretty color, but the final product had too much of a toasted—almost burnt—sesame taste to me, but was still good. The second batch I only lightly toasted, and it was much better. The recipe was so easy, the seeds and pistachios were easy to mix with the honey (not sure why you’re told to stand back – the honey did start to sizzle each time, but no splatters).

I used a silicone spatula sprayed lightly with oil to stir, and then the same spatula instead of a spoon or my hands to smooth and shape the candy. It was very easy to control, smooth, and shape into a rectangle. The third time I made the recipe, I used a little lemon zest and cinnamon to give it a little more baklava flavor—this was by far everyone’s favorite. A great recipe that is easy and fun to play with. I’m sure you could change the type of nuts, too, and it would still be a hit.