White chocolate cupcakes with white chocolate cream cheese frosting are a heavenly and stunning spectacle of cake perfection. Not too sweet. Not too rich. Just simple cupcake loveliness through and through.

These white chocolate cupcakes have a stunning appearance and a subtle sweetness. The white chocolate flavor isn’t incredibly assertive—if anything, it’s a delicate and lovely vanilla undertone that goes perfectly with the fine-crumbed texture to create a spare sophistication that’ll appease kids as well as adults.–Renee Schettler Rossi 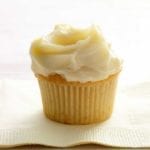 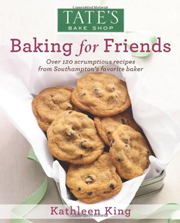 White Chocolate Layer Cake To make a white chocolate layer cake instead of white chocolate cupcakes, double the recipe, use two 9-inch pans instead of cupcake tins, and bake for about 40 minutes. White Chocolate Cupcakes Filled With Jam A tart jam filling contrasts nicely with the sweetness of these white chocolate cupcakes and cream cheese frosting—raspberry, strawberry, currant, or just about anything would be lovely. If filling the cupcakes, place about 3/4 cup jam in a pastry bag fitted with a plain tip about 1/2 inch wide. Insert the tip about 1/2-inch deep into a cooled cupcake and squeeze to pipe about a tablespoon jam deep into the heart of the cupcake. Repeat with the remaining cupcakes and jam.

I have to say that I’d my doubts about this recipe. The batter was thin and, despite what the author says, the cupcakes rose and turned slightly golden in the oven. I figured they’d be dry, but the cupcakes were perfectly baked. The texture of the cupcake was good—the crumb was tight and the structure was firm. It wasn’t dry, but it wasn’t soft, either. It had a whisper of white chocolate—which to me is a creamy, milky flavor. Of course, there’s no chocolatey chocolate flavor. Clearly, white chocolate isn’t an assertive flavor.

Our guests loved these and I’d definitely recommend them. I frosted a cupcake using an ice cream scoop to see if it’s indeed easy to frost that way, and it was!

The white chocolate flavor was delicate and delicious. Once filled with the raspberry jam and topped generously with the rich White Chocolate Cream Cheese Icing, each flavor component complimented the whole.

This recipe produced exactly 12 cupcakes, as promised. The use of cake flour resulted in a soft and fine crumb.

These white chocolate cupcakes are truly an inspiration! The cupcakes are moist and flavorful. They’re a bit dense, like pound cake. The white chocolate taste is undetectable to me, even though I knew white chocolate was in there. They have a very vanilla flavor to me. The frosting is out-of-this-world scrumptious. The recipe allowed for a very generous dollop atop the cupcake, which was incredible because I truly couldn’t get enough of it.

The contrast of the raspberry with the sweet cupcake was perfect; do not skip the raspberry jam or disappointment will be had! These cupcakes also came together easily.

The recipe says it makes 12 and to fill the cups very full, but I still ended up with 15. I only put raspberry jam in a few, and they were received with mixed reviews. No one thought the jam was a great addition.

I topped the cupcakes with the white chocolate cream cheese icing. I’m not a huge cream cheese fan, and this is very cream cheesy, so next time I may try adding some orange zest to the icing or a dark chocolate drizzle with a sprinkle of sea salt.

The recipe made exactly 12 cupcakes and the frosting was more than enough to frost the 12 cupcakes using a piping bag and making a nice size swirl of frosting on top.

These cupcakes are good and easy to make. I filled a cupcake with Nutella. The Nutella is great with the cupcake. I suspect that a dark chocolate frosting or a Nutella-based frosting would be better than the white chocolate frosting.